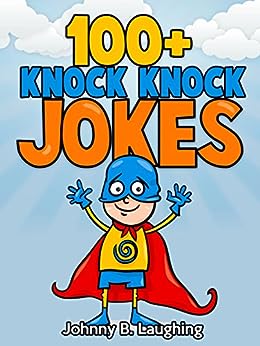 by Johnny B. Laughing (Author) Format: Kindle Edition
See all formats and editions
Sorry, there was a problem loading this page. Try again.

Are you looking for a fun book to keep the kids entertained and happy? This funny joke book for kids is excellent for early and beginning readers. Laughing and jokes have been proven to have positive mental and physical effects on the body!

This books is especially great for long trips, waiting rooms, and reading aloud at home.

Download a free joke book with purchase of this book!

Knock knock!
Who’s there?
Tullos!
Tullos who?
Tullos all your secrets!

Knock knock!
Who’s there?
Amy!
Amy who?
I’m always Amy for the top!

Knock knock!
Who’s there?
Juno!
Juno who?
Juno how long I’ve been knocking on this door?

Knock knock!
Who’s there?
Allison!
Allison who?
Allison to the radio every morning!

The Joke King is back with another hilarious joke book full of funny, laugh-out-loud, crazy comedy and MASSIVE assortment of knock knock jokes for children of all ages, teens, and adults. This awesome joke book for kids is easy to read and full of laughs!

WARNING: This funny joke book will cause you to laugh hysterically!

The Joke King is back with another hilarious joke book full of funny, laugh-out-loud, crazy comedy and MASSIVE assortment of knock knock jokes for children of all ages, teens, and adults. This awesome joke book for kids is easy to read and full of laughs! --This text refers to an alternate kindle_edition edition.

3.9 out of 5 stars
3.9 out of 5
4,088 global ratings
How are ratings calculated?
To calculate the overall star rating and percentage breakdown by star, we don’t use a simple average. Instead, our system considers things like how recent a review is and if the reviewer bought the item on Amazon. It also analyses reviews to verify trustworthiness.

Doug McNeill
1.0 out of 5 stars HORIBBLLE JUNK
Reviewed in Australia on 17 December 2018
Verified Purchase
horible not even funny jokes
this is the most pathetic excuse for a knock knock joke book

knock knock
whos there
europe
europe who
no, your a poo

that was a good one

Julia
4.0 out of 5 stars Amazing but
Reviewed in Australia on 8 December 2018
Verified Purchase
This book is full with amazing jokes but some of the jokes I couldn't even understand. I Think this book deserves four stars however some of these jokes made me cracking with laughter
Read more
Helpful
Report abuse

Sheree Holmes
1.0 out of 5 stars STUPIIIID!
Reviewed in Australia on 19 September 2017
Verified Purchase
these so called "JOKES" are the cheesiest jokes in the world in fact there so cheesy there corny
not only that i didnt even smile or grin let alone laugh
Read more
One person found this helpful
Helpful
Report abuse

RM
1.0 out of 5 stars Not funny
Reviewed in Australia on 13 June 2017
Verified Purchase
Junky silly silly junk hardly worth a smile words fail me anything else is not worth saying again and again
Read more
2 people found this helpful
Helpful
Report abuse

Amazon Customer
1.0 out of 5 stars YUCK!!!😣
Reviewed in Australia on 14 June 2017
Verified Purchase
So terrible it made me feel like I'm going to throw up! It was funny because it was so bad!!!
Read more
One person found this helpful
Helpful
Report abuse

C E HEWITT
5.0 out of 5 stars Five Stars
Reviewed in the United Kingdom on 22 December 2017
Verified Purchase
Bought for my 6-year-old grand-daughter; she loves it
Read more
7 people found this helpful
Report abuse

Laura Kent
2.0 out of 5 stars BAD PUNS
Reviewed in the United Kingdom on 6 October 2019
Verified Purchase
They had really bad puns for a UNCLE (or mabye a 1year old)
NO LAUGHING IN IT AT ALL
age rating:0-2
Funnes level:1
in my opinion: IT WAS POOOOOP
~hope it helps you <3
Read more
3 people found this helpful
Report abuse

I. Clarke
3.0 out of 5 stars OK for young kids, a bit monotonous after a while!
Reviewed in the United Kingdom on 7 August 2016
Verified Purchase
We have been reading this book on kindle today. Some are very funny but others are terrible. It's when I have to explain them to my daughter that they are not good.
I did wonder how they could fill a whole book with knock knock jokes. Oh well my 6 year old has had a bit of fun with them and I am sure that we will be hearing these jokes for months to come!
Read more
6 people found this helpful
Report abuse

Hannah
5.0 out of 5 stars My review
Reviewed in the United Kingdom on 17 August 2016
Verified Purchase
I choose to rate it 5 whole stars because it was fantastic and a great read.I liked all of it, even though I did not get some of the jokes at first but I understood them afterwards.l found the jokes very funny and read it many times to cheer me up.
Read more
6 people found this helpful
Report abuse

craig
3.0 out of 5 stars Happy
Reviewed in the United Kingdom on 15 February 2021
Verified Purchase
Really happy and good jokes. hahaha
Read more
2 people found this helpful
Report abuse
See all reviews
Report an issue
Does this item contain inappropriate content?
Report
Do you believe that this item violates a copyright?
Report
Does this item contain quality or formatting issues?
Report