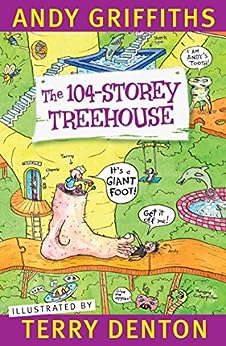 Join Andy and Terry in their wonderfully wild and wacky 104-storey treehouse. You can throw some refrigerators, make some money with the money-making machine (or honey if you'd prefer-it makes that too), climb the never-ending staircase, have a bunfight, deposit some burps in the burp bank, get totally tangled up in the tangled-up level, or just take some time out and relax in the peaceful sunny meadow full of buttercups, butterflies and bluebirds.

Well, what are you waiting for? Come on up!

WINNER OF THE YABBA AWARD FOR FICTION FOR OLDER READERS 2019

Andy and Terry's amazing treehouse has 13 new storeys. Prepare for more zany fun and crazy adventures! --This text refers to the hardcover edition.

Andy Griffiths and Terry Denton began their creative partnership with <b><i>Just Tricking!</i></b> in 1997. They have now collaborated on eight <b>Just</b> books (with more than a million copies sold), the ground-breaking <b><i>The Bad Book</i></b>, the off-the-wall <b><i>The Cat on the Mat is Flat</i></b>, and now the phenomenal, sales-record-smashing, award-winning <b>Treehouse </b>series. Andy and Terry have won numerous kids choice awards and many of their titles are nominated every year. --This text refers to the hardcover edition.

The eighth crazy and hilarious adventure in the world's most awesome treehouse! --This text refers to the audioCD edition.

'A potent mix of fantasy, nonsense, adventure and cartoons, this series is catnip to every eight-year-old who encounters it.' (The Bookseller) --This text refers to an alternate kindle_edition edition.

Andy Griffiths and Terry Denton are a creative partnership that began with Just Tricking! in 1997 and now extends to eight Just books and more than a million copies sold, the ground-breaking The Bad Book, the off-the-wall success of The Cat on the Mat is Flat, the Bum trilogy (which made the New York Times bestseller list), the bestselling The Very Bad Book and now the award-winning, bestselling Treehouse series. Andy and Terry have won numerous kids choice awards and many of their titles are nominated every year. --This text refers to an alternate kindle_edition edition.

The kind of book I would have loved as a kid. -- Tom Fletcher

Brilliant series and if you haven't read them yet why not? Start at the beginning and work through them all. Laugh out loud funny and I love reading about all the things they have in their treehouse ― Toppsta Reviewer --This text refers to the paperback edition.

Andy Griffiths is an internationally successful, award-winning children's author. His books have been bestsellers in his homeland Australia, the USA and the UK. He is the co-creator of the bestselling, award-winning Treehouse series with illustrator Terry Denton, which has been published in over thirty countries. Andy thrives on having an audience: he has worked as a high school teacher; been the lead singer in a rock band and a stand-up comedian. He has two daughters and lives in Melbourne, Australia.

Terry Denton is a bestselling and award-winning writer and illustrator based in Melbourne, where he lives by the beach with his wife and three kids. He has won more than fifteen children's choice awards throughout Australia and is the co-creator of the bestselling Treehouse series with author Andy Griffiths, which has been published in over thirty countries. As well as being an illustrator, Terry is a fine artist and has held several exhibitions around inner Melbourne.

Andy Griffiths is Terry's best mate. He is also Australia's number-one children's author. His books, including the popular Treehouse series, have been hugely successful internationally, winning awards and becoming bestsellers in the UK and the USA as well as in his homeland, Australia. Andy thrives on having an audience: he has worked as a high-school teacher, been the lead singer in a rock band and a stand-up comedian. He is a passionate advocate for literacy, has two daughters and lives in Melbourne, Australia.

4.8 out of 5 stars
4.8 out of 5
1,270 global ratings
How are ratings calculated?
To calculate the overall star rating and percentage breakdown by star, we don’t use a simple average. Instead, our system considers things like how recent a review is and if the reviewer bought the item on Amazon. It also analyses reviews to verify trustworthiness.

Amazon Customer
1.0 out of 5 stars Series is going downhill (worst book in the series)
Reviewed in Australia on 14 July 2018
Verified Purchase
The series feels very rushed, just like n the book how their publisher expects a new book in half a day, except they havent had half a day, they've had 1 whole year. There are around 30-40 pages of filler in the book that includes the caracters climbing the never ending staircase. A situation that wastes the readers time, a concept they have touched on before in Once upon a Slime that includes writing techniques , one being wasting the readers time. They showw how they have used this before in the Bad Book. However, in tthe Bad Books case, it was a joke book. Not meant t be taken seriously. However, this is Andy and Terry's most popular and praised series. And now its just used as a technique for the publisher and authors to make as much money as possible from fans of the books. Its even admitted at th end that most of the story shouldn't have happened. There even are "jokes" throughout the book that are just usd to get the text to pad out. In conclusion, I dont really like the series anymore. I've been following Andy and Terry for a very long time and i've read all of their books and classics like The Cat on the mat is flat, What bumosaur is that and The 13 Storey Treehouse. Now, with thiss release, the series haa lost its magic. I dont like Andy Griffiths and Terry Denton any more.
Read more
One person found this helpful
Helpful
Report abuse

hel
5.0 out of 5 stars Will keep on buy the new ones
Reviewed in Australia on 12 August 2018
Verified Purchase
Happy for this latest one as well as previous ones
Read more
Helpful
Report abuse

Amazon Customer
3.0 out of 5 stars this book is AMAZING!
Reviewed in Australia on 2 December 2019
ive loved the story treehouse storys since i can remember. the book feels like your involved like your part of the story. thing is i didnt like how so many pages were wasted on the endless staircase. the book to do with some more detail other then that this book is great for people who arent that good at reading. the new floor i wish i had in real life! my favorite floor was money and honey. we can all agree that thbe floors are very creative but some of the floors kinda suck... And thats why im rating it 3.5 stars! (but of course you cant do 3.5 stars on kindle so its 3 stars
Read more
Helpful
Report abuse

Amazon Customer
5.0 out of 5 stars The 104 Treehouse
Reviewed in Australia on 16 July 2018
This was a great book to read.I would recommend this book for everyone who is a fan of funny, an easy read and humor that comes naturally for the author and illustrator. This is one of the top in the series. I love how the author is creative and though funny a little realistic. Without giving the story away the levels are crazy and odd. For example a $2 shop beside a $2 million shop as well as some levels I'd love to habe such as the money (and honey) machine and a burp bank. This is an action packed story that I recommend for %110 of children and adults. The treehouse series just gets better and better.
This is a book that will change writing forever.
This is a book I would recommend the world reading.
This the treehouse series.
They have come to change childrens reading forever!
For the better!

Amazon Customer
5.0 out of 5 stars One of the best books ever
Reviewed in Australia on 10 November 2018
Roald dalh and david walliams has some competition although I'd say there books are even one of the reviews was mean and boring (yawn) and it was the top one. I think these books are still amazing and entertaining
PS: I still love author + illustrator :D
Read more
Helpful
Report abuse

Amazon Customer
2.0 out of 5 stars terrible
Reviewed in Australia on 28 August 2019
the 104 storey treehouse this is terrible lets hope they have some good ideas for the next book. for heavans sake a toothache
Read more
Helpful
Report abuse
See all reviews

Mrs H M Hollingdale
5.0 out of 5 stars The 104 story tree house
Reviewed in the United Kingdom on 7 September 2018
Verified Purchase
I am ten and my 6 year old brother is reading it too

I think it was so so so funny
I rate this book 5 stars
I think this book is great for 6+
:)
Read more
16 people found this helpful
Report abuse

Mrs
5.0 out of 5 stars Brilliant books - massive fan!
Reviewed in the United Kingdom on 6 October 2018
Verified Purchase
These books got my boy reading for pleasure!! He was very behind in his reading and the books that were on offer for his ability/level were babyish and boring! :( This book is funny and was age appropriate for him (nearly 10 when began to read them). He is nearly 12 now and asking for the new ones for his birthday! he has began to read other books too and it all started with this book!! If you have a child that dosent really like to read then id recommend you give these books a try. Thank you. :)
Read more
7 people found this helpful
Report abuse

S C Sinclair
5.0 out of 5 stars Great fun, highly addictive!
Reviewed in the United Kingdom on 27 April 2021
Verified Purchase
We got into the Treehouse stories as we wanted to get our 6yo into slightly longer, more grown-up “adventure” books, rather than the large print younger kids books.

The series is great fun as the characters go on crazy & ridiculous adventures- 6yo has found them hilarious. A lot of drawings help to bring it to life, which keeps the younger kids interested, but they’re integral to the story so wouldn’t put off older kids.

They went down so well that we’ve bought these for my nephew (same age)- I don’t know who enjoyed them more- the adults or the kids...

Finknottle
5.0 out of 5 stars Best Treehouse Book So Far!
Reviewed in the United Kingdom on 27 August 2018
Verified Purchase
My five year old adores the Treehouse series and we pre-ordered this one a few months ago. The book exceeded expectations! Brilliant story and illustrations, very funny and original, and even crazier than the previous books. Absolutely brilliant - arrived on Friday afternoon, my son finished it before breakfast on Saturday.
Read more
6 people found this helpful
Report abuse