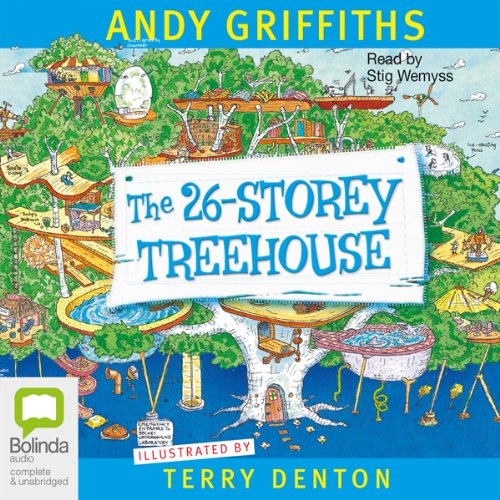 You’re probably wondering just how Andy and Terry met. Well, it’s a long story, but a pretty exciting one, and it’s mostly true! Come on up, choose a hammock, and they’ll tell you all about it. Andy and Terry's newly expanded treehouse, which now features 13 brand-new storeys, including a dodgem car rink, a skate ramp, a mud-fighting arena, an antigravity chamber, and an ice cream parlour with 78 flavours run by an ice-cream-serving robot called Edward Scooperhands. Just keep clear of the Maze of Doom - a maze so complicated that nobody who has gone in has ever come out again. Well, not yet, anyway.

4.7 out of 5 stars
4.7 out of 5
816 global ratings
How are ratings calculated?
To calculate the overall star rating and percentage breakdown by star, we don’t use a simple average. Instead, our system considers things like how recent a review is and if the reviewer bought the item on Amazon. It also analyses reviews to verify trustworthiness.

Kindle Customer
5.0 out of 5 stars FUNNY & AWSOME :D
Reviewed in Australia on 11 September 2019
Verified Purchase
OMG!!! i loved this book and i recomend it for all ages. it was funny amd amazing!!!XD you should deffinatly get it since it is worth the money!!!!!!!!!!;)
Read more
One person found this helpful
Helpful
Report abuse

Rebecca baker
5.0 out of 5 stars Amazing loved it
Reviewed in Australia on 26 August 2015
Verified Purchase
great for kids in primeray school can not wait to read the next two .The 39 storey tree house and the 52 storey tree house !!
Read more
Helpful
Report abuse

Alan Harvey
5.0 out of 5 stars Biggest fan ever!
Reviewed in Australia on 17 March 2016
Hello everyone thankyou for reading this. I thought this book was amazing so much good pictures to help with the words. I have the whole collection now such a good book.I would totally recommend this to kids age 5 to 12 if they have trouble reading. I and lots of others would agree with this i think it could of had a little more words in it. I think it was ust crammed a bit to much with pictures. But apart from that AWESOME :) ;D :P
Read more
Helpful
Report abuse

JULIE
5.0 out of 5 stars Got a Grade 2 boy? Look no further...
Reviewed in Australia on 2 April 2014
They are eating this book up. And the good news? It has as sequel (and a prequel if you missed it) and it's just a short step to other similar books now you have them hooked....
Read more
Helpful
Report abuse

Baiba
5.0 out of 5 stars Great book
Reviewed in the United Kingdom on 21 August 2020
Verified Purchase
Bought this book for my boyfriends 8 year old son. He isn't a keen reader, but I wanted to make him read more.

So far we have been reading a chapter a day and he has enjoyed it and has been reading with very little protesting.

Short chapters with loads of illustrations, which helps him to stay interested and not get bored. Also stories are quite funny, which helps a great deal.
Read more
5 people found this helpful
Report abuse

Marie Smallwood
5.0 out of 5 stars Book review.
Reviewed in the United Kingdom on 26 July 2020
Verified Purchase
I enjoy reading your book's l am 49 and love how great the book's are with all the amazing things that are in the tree house. A great way to unwind and distract from the real world. Highly recommended. I will definitely be reading more many thanks for your books they add happiness to my life and make me smile. I used to read Enid Blyton book's as a child like the faraway tree and the wishing chair etc. Book's can take you away from sadness in your life for a few hours.
Read more
5 people found this helpful
Report abuse

Becci
5.0 out of 5 stars Great books!
Reviewed in the United Kingdom on 25 April 2020
Verified Purchase
This treehouse series is a huge hit with my 6 year old, he has read them himself over and over again, even my 4 year old enjoys listening them as they are very silly and funny. We buy these books for gifts now too.
Read more
3 people found this helpful
Report abuse

Christine Thomas
5.0 out of 5 stars My 7yr old son can’t stop READING!!!
Reviewed in the United Kingdom on 21 March 2018
Verified Purchase
This whole series of books has ignited a love of reading in my 7 (nearly 8) year old son. He has stormed through them at a rate of knots and doesn’t stop talking about them. He’s asked everyone what their favourite chapter book is, so he has ideas what he can read next. This is amazing for him, being the only brother to three sisters, he often gets fed up, often asking to play on his console or tablet; often hearing “no”..

Books are so important imo, and I didn’t think he would level up from me reading bedtime stories, to him reading chapter books that take him on fantastic journeys and adventures.
I thought he was lost to flat screens and pixels. Despite my allowing only minimal play with his devices, he just had no interest. Until this series..
Buy them all!!
Read more
3 people found this helpful
Report abuse

cookiemon
5.0 out of 5 stars 26 storey treehouse (treehouse series)
Reviewed in the United Kingdom on 19 April 2021
Verified Purchase
This book is awsome!!! I've just finished the book and it is so cool how they think of catapulting the book to crazy nose (Mr Big Nose). I think there storeys are super cute and Terrys pants are hilarios. Silky is so cute and it would be sooooooo cool to ride in a sleigh with flying cats pulling it!!
Bye
Read more
Report abuse
See all reviews
Back to top
Get to Know Us
Make Money with Us
Let Us Help You
And don't forget:
© 1996-2022, Amazon.com, Inc. or its affiliates