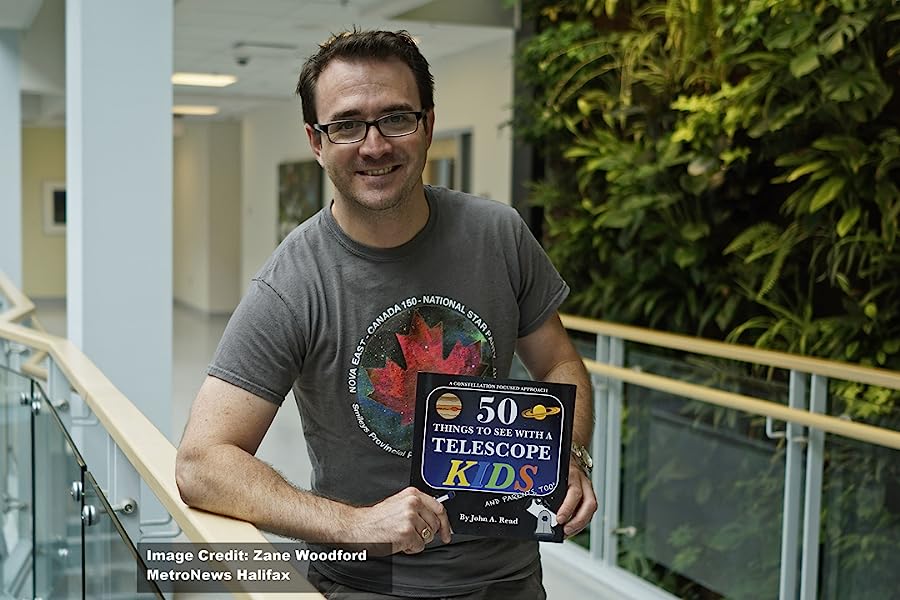 50 Things To See With A Telescope - Kids: A Constellation Focused Approach Paperback – 9 September 2021

by John Read (Author)
4.6 out of 5 stars 4,447 ratings
See all formats and editions
Sorry, there was a problem loading this page. Try again.

From the author of the bestselling book 50 Things to See with a Small Telescope, this colorful edition explores the constellations with young readers, guiding them to dozens of galaxies, nebulae, and star clusters. Every page features a helpful "telescope view", showing exactly how objects appear through a small telescope or binoculars.

While a member of the Mount Diablo Astronomical Society in California, John Read taught thousands of students how to use telescopes and explore the night sky. Now, he's sharing this knowledge with you! Even without a telescope, this introduction to the night sky is essential for every child's collection.

Shortly after receiving his pilot’s license as a Royal Canadian Air Cadet, John dropped out of Aerospace Engineering at Carleton University to pursue a degree (and career) in Corporate Finance. A few years later, his wife bought him a twelve-inch Dobsonian Telescope for Christmas (to be fair, she got leather boots). He joined the Mount Diablo Astronomical Society, volunteering as many as four nights per week under California’s cloudless skies. During his time at MDAS he began writing essays for the club’s magazine, Diablo MoonWatch, and later published his first book, 50 Things to See with a Small Telescope. In 2016, John left corporate America, and is now a full time astrophysics student in Halifax, Nova Scotia.

4.6 out of 5 stars
4.6 out of 5
4,447 global ratings
How are ratings calculated?
To calculate the overall star rating and percentage breakdown by star, we don’t use a simple average. Instead, our system considers things like how recent a review is and if the reviewer bought the item on Amazon. It also analyses reviews to verify trustworthiness.

Peter Axton
1.0 out of 5 stars Not much good if you live in the southern hemisphere
Reviewed in Australia on 1 January 2021
Verified Purchase
Our niece received a telescope for Christmas and I thought this would help her get the most out of it. There are lots of things you can look at with a telescope, like hills and wildlife, as well as the sky and I assumed that was what would be covered. It never dawned on me that it would only cover the night sky and only the northern hemisphere. There are a couple of pages talking about types of telescope and how to use them and the information on constellations is well done, but we live in Australia so not much chance of seeing any of that. It does cover the planets so I'm hoping the book will help her identify those.
Read more
3 people found this helpful
Helpful
Report abuse
See all reviews

Mark Gibbons
5.0 out of 5 stars Brilliant book for children with a telescope
Reviewed in the United Kingdom on 10 December 2019
Verified Purchase
This book is excellent for pointing out the stars and constellations above us. It explains in language what children will understand. Brilliant. We have bought it for our granddaughter as part of a present with a telescope. Really looking forward to her face when she sees both the telescope and the book. A smiley face I think.
Read more
9 people found this helpful
Report abuse

Emily
1.0 out of 5 stars Not worth any stars, a cheap badly printed effort of a book
Reviewed in the United Kingdom on 4 April 2021
Verified Purchase
This book is VERY badly printed. Lots of the words not visible due to poor page layout. Some examples in these photos but it's like this on every page.

Also, the book talks about winter skies and summer skies, but not where in the world! What you see will be different in northern and southern hemisphere.

1.0 out of 5 stars Not worth any stars, a cheap badly printed effort of a book
Reviewed in the United Kingdom on 4 April 2021
This book is VERY badly printed. Lots of the words not visible due to poor page layout. Some examples in these photos but it's like this on every page.

Also, the book talks about winter skies and summer skies, but not where in the world! What you see will be different in northern and southern hemisphere.

Images in this review

C P.
5.0 out of 5 stars Just the job
Reviewed in the United Kingdom on 5 December 2017
Verified Purchase
Good price, just the job for 5 year old grandson getting an interest in the stars.
Read more
16 people found this helpful
Report abuse

Katie Hunter
4.0 out of 5 stars Lovely
Reviewed in the United Kingdom on 25 October 2018
Verified Purchase
Lovely book, purchased to accompany a telescope for my sons xmas present, helps us parents guide our children as to what to look for, can't wait to use.
Read more
6 people found this helpful
Report abuse
See all reviews
Back to top
Get to Know Us
Make Money with Us
Let Us Help You
And don't forget:
© 1996-2022, Amazon.com, Inc. or its affiliates