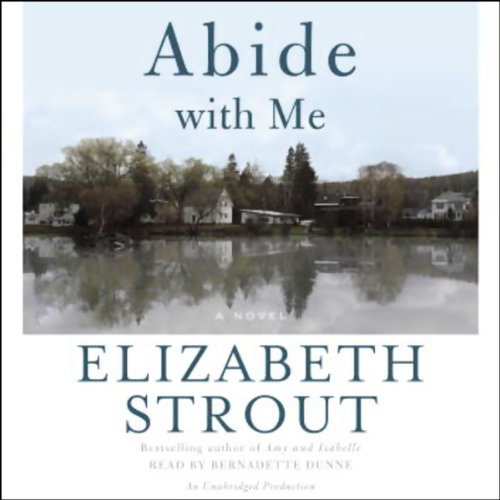 Abide with Me: A Novel

Elizabeth Strout (Author), Gerrianne Raphael (Narrator), Random House Audio (Publisher) & 0 more
4.3 out of 5 stars 2,045 ratings
See all formats and editions
Sorry, there was a problem loading this page. Try again.
In her luminous and long-awaited new novel, best-selling author Elizabeth Strout welcomes readers back to the lovely landscape of northern New England, where the events of her first novel, Amy and Isabelle, unfolded. In the late 1950s, in the small town of West Annett, Maine, a minister struggles to regain his calling, his family, and his happiness in the wake of profound loss. At the same time, the community he has served so charismatically must come to terms with its own strengths and failings, faith and hypocrisy, loyalty and abandonment, when a dark secret is revealed.

Tyler Caskey has come to love West Annett, "just up the road" from where he was born. The short, brilliant summers and the sharp, piercing winters fill him with awe, as does his congregation, full of good people who seek his guidance and listen earnestly as he preaches. But after suffering a terrible loss, Tyler finds it hard to return to himself as he once was. He hasn't had The Feeling, that God is all around him, in the beauty of the world, for quite some time. He struggles to find the right words in his sermons and in his conversations with those facing crises of their own, and to bring his five-year-old daughter, Katherine, out of the silence she has observed in the wake of the family's tragedy.

A congregation that had once been patient and kind during Tyler's grief now questions his leadership and propriety. In the kitchens, classrooms, offices, and stores of the village, anger and gossip have started to swirl. And in Tyler's darkest hour, a startling discovery will test his congregation's humanity, and his own will to endure the kinds of trials that sooner or later test us all.

In prose incandescent and artful, Elizabeth Strout draws readers into the details of ordinary life in a way that makes it extraordinary. All is considered, life, love, God, and community, within these pages, and all is made new by this writer's boundless compassion and graceful prose.

4.3 out of 5 stars
4.3 out of 5
2,045 global ratings
How are ratings calculated?
To calculate the overall star rating and percentage breakdown by star, we don’t use a simple average. Instead, our system considers things like how recent a review is and if the reviewer bought the item on Amazon. It also analyses reviews to verify trustworthiness.

James
2.0 out of 5 stars Love Elizabeth Strout but not this one...
Reviewed in Australia on 26 October 2021
Verified Purchase
The relationship between the main character Tyler and his troublesome daughter was most promising but not enough to keep me engaged beyond the first quarter of this more stodgy attempt by Strout. Her first book had me rivetted from this point unable to put it down whereas Abide was permanently put down I'm afraid.
However, based on her first book I am still a fan just not of Abide.
Read more
Helpful
Report abuse

Anne Whight
5.0 out of 5 stars Another wonderful read from Elizabeth Strout.
Reviewed in Australia on 24 March 2020
Verified Purchase
I loved this gentle tale of a grieving widowed minister and his young daughter. While Katherine struggles with school, kinderkirk, and peers and adults, her father, Tyler, struggles with life in a small town, a narrow-minded, gossipy congregation, and an interfering mother. A fictional but fascinating glimpse into their world and their lives.
Read more
One person found this helpful
Helpful
Report abuse

Kindle Customer
TOP 1000 REVIEWER
5.0 out of 5 stars Very profound
Reviewed in Australia on 9 February 2021
Verified Purchase
Elizabeth Strout is a very good writer. This is a wonderful book set in a small New England town about a minister struggling with grief. Full of insight.
Read more
One person found this helpful
Helpful
Report abuse

Kate Parrick
5.0 out of 5 stars magic abides
Reviewed in Australia on 23 March 2022
Verified Purchase
The work by Elizabeth Strout is all beautiful, but Tyler Caskey is a character for the ages, who'll stay with me forever. What a beautiful achievement is this novel.
Read more
Helpful
Report abuse

elizabeth
5.0 out of 5 stars Five Stars
Reviewed in Australia on 12 July 2016
Verified Purchase
A beautiful book. Moving and filled with insights into people
Read more
One person found this helpful
Helpful
Report abuse

Linda
5.0 out of 5 stars Beautifully written
Reviewed in Australia on 11 March 2020
Verified Purchase
'Abide with Me' is a simple story about average people but written so beautifully that each character is alive and vibrant in their own right. Elizabeth Strout is an extraordinary writer making ordinary lives and occurrences deep and resonating. All her books are a joy.
Read more
One person found this helpful
Helpful
Report abuse
See all reviews

M. Dowden
3.0 out of 5 stars Welcome to West Annett
Reviewed in the United Kingdom on 16 August 2020
Verified Purchase
Here Elizabeth Strout takes us back to the Fifties, with most of this novel taking place in 1959, in a small New England town called West Annett. Here we are introduced to Tyler Caskey, who is the new minister, and as this opens he has lost his wife and has his eldest daughter living with him, and then some distance away his youngest daughter is living with his mother, as she is only a baby as such. We of course follow back in time to see what the marriage was like, and how Tyler first came to the church that he is now ministering to.

This then is a tale of small-town living, the evils of gossip and a man put into a difficult situation. As we all know gossip can be malicious and distort the truth as it grows in the hands of a number of people, and so this part of the story reads as authentic. A man such as the pastor here being placed in a difficult situation is something that can happen to people, so there is no problem as such with this, or the fact that the daughter he has with him is obviously troubled by events, such as still being in mourning, and missing her little sister. We read of a handful of his parishioners, who also have problems of their own, which we all do, and once again this is what you would expect.

Although well written this novel does let itself down somewhat as we only have a piece of the small town as such being shown to us, thus giving an even more isolated feel, and there is a bit too much preaching at times, as if this wants to be a biblical tale, which it isn’t. The ending also grates, as those who are responsible for the rumours and so on all seem to realise how bad they have been, and seek to change their ways, which thus makes this starting to verge towards the farcical. I have been there, with malicious gossip about myself, and to be perfectly blunt those responsible probably could not give a toss, as some have gained by it both financially and with promotions. So, this loses its way by trying to become a bit too folksy and charming, and then by the end wanting to be jolly and uplifting. Life is not like that, and so this all starts to slowly ungather as you carry on reading it, making it okay as such things go, but not offering the depth and realism that Strout can produce.
Read more
6 people found this helpful
Report abuse

HLeuschel
5.0 out of 5 stars A gem of a book!
Reviewed in the United Kingdom on 16 May 2020
Verified Purchase
This is a masterpiece for me!
The characters, especially the main one, a grieving minister, father and widower, were so real and bristling with life that I was constantly drawn back to the book wanting to know, empathize, root for the man and his two very young daughters. The narrative had many different sub-plots, taking the reader into the past to understand the characters' backgrounds, into the different lives of the people who were talking behind the minister's back and those who were not involved in the spinning of assumptions, the minister's five year old daughter and her grief and deep confusion about how to deal with the loss, the lives also of those who appreciated his kindness and unbreakable endurance skills.
It's a book I can only marvel about, urge others to read and experience for themselves and that I definitely plan to read again in the future!
Read more
6 people found this helpful
Report abuse

Dragon
4.0 out of 5 stars Thoughtful novel about faith, loss and compassion
Reviewed in the United Kingdom on 26 August 2017
Verified Purchase
A compellingly sad story about a minister and his flock in a rural US community. He's lost his wife and we follow him through a year of struggling with that loss and the sadness of the flawed marriage that went before. Events in real-time (his daughter malfunctioning badly at school, his housekeeper's troubled personal life) aren't happy either. I hit a point around 2/3 the way through where I thought I was sliding down a slippery slope to misery, reading this, but I recommend you persevere. Events turn in interesting directions, and the end is worth sticking out for.
Read more
15 people found this helpful
Report abuse

Amazon Customer
2.0 out of 5 stars Not for me
Reviewed in the United Kingdom on 30 November 2021
Verified Purchase
I was intrigued by the back story: a bereaved family, man losing his young wife, a young child losing her mum. Some similarities to by husbands situation when his first wife died and left 3 kids one of whom ideas 6.
The “plot” for what it was worth was very thin and the non-biblical “biblical quotes” were so unnecessary. One or two maybe but not to the point of exhaustion.
I felt there was far too much unnecessary add ins that left me cold and all of which I skipped over. And who is that B dude - I skipped over all of that.
And then there was Charlie with that woman in Boston and the ridiculous gratuitous sex references to threesomes and the size of his genitals. Seriously! Why didn’t we get a look into more of the characters’ lives?
The story could be told in about half the words or even less. I finished the book only to find out what happened to Kitty Kat.
First and last from this author. This book definitely did not do it for me.
Read more
One person found this helpful
Report abuse
See all reviews