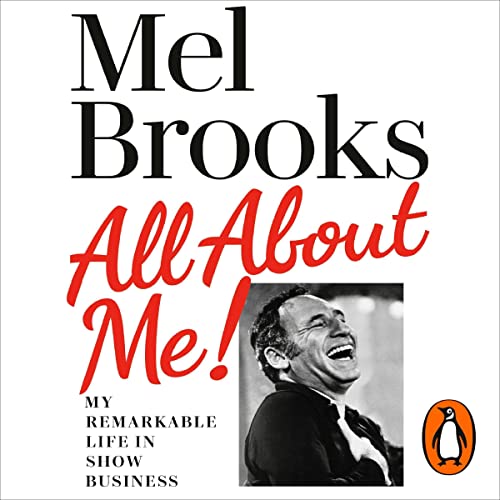 All About Me!: My Remarkable Life in Show Business

At 95, the legendary Mel Brooks continues to set the standard for comedy across television, film, and the stage. Now, for the first time, this EGOT (Emmy, Grammy, Oscar, Tony) winner shares his story in his own words.

"I hope fans of comedy will get a kick out of the stories behind my work, and really enjoy taking this remarkable ride with me." (Mel Brooks)

For anyone who loves American comedy, the long wait is over. Here are the never-before-told, behind-the-scenes anecdotes and remembrances from a master storyteller, filmmaker, and creator of all things funny.

All About Me! charts Mel Brooks' meteoric rise from a Depression-era kid in Brooklyn to the recipient of the National Medal of Arts. Whether serving in the United States Army in World War II, or during his burgeoning career as a teenage comedian in the Catskills, Mel was always mining his experiences for material, always looking for the perfect joke. His iconic career began with Sid Caesar's Your Show of Shows, where he was part of the greatest writers' room in history, which included Carl Reiner, Neil Simon and Larry Gelbart. After co-creating both the mega-hit 2000 Year Old Man comedy albums and the classic television series Get Smart, Brooks' stellar film career took off. He would go on to write, direct and star in The Producers, The Twelve Chairs, Blazing Saddles, Young Frankenstein, Silent Movie, High Anxiety and Spaceballs, as well as produce groundbreaking and eclectic films, including The Elephant Man, The Fly and My Favorite Year. Brooks then went on to conquer Broadway with his record-breaking, Tony-winning musical, The Producers.

All About Me! offers fans insight into the inspiration behind the ideas for his outstanding collection of boundary-breaking work, and offers details about the many close friendships and collaborations Brooks had, including those with Sid Caesar, Carl Reiner, Gene Wilder, Madeleine Kahn, Alfred Hitchcock and the great love of his life, Anne Bancroft.

Filled with tales of struggle, achievement and camaraderie, listeners will gain a more personal and deeper understanding of the incredible body of work behind one of the most accomplished and beloved entertainers in history.

4.6 out of 5 stars
4.6 out of 5
3,234 global ratings
How are ratings calculated?
To calculate the overall star rating and percentage breakdown by star, we don’t use a simple average. Instead, our system considers things like how recent a review is and if the reviewer bought the item on Amazon. It also analyses reviews to verify trustworthiness.

There are 0 reviews and 31 ratings from Australia

limner
5.0 out of 5 stars An unexpected delight.
Reviewed in the United Kingdom on 31 December 2021
Verified Purchase
Being accustomed to show-biz autobiographies that are often either a succession of well polished anecdotes or volumes that reveal one's heroes as less likeable than one would wish I was unsure if I should buy this.
( I am a great fan of Mel Brooks and his films and did not want to be disillusioned.)
However this book turned out to be an absolute delight. It is warm, kind, funny, fascinating and beautifully written and far exceeded my expectations. Mel Brooks story is the perfect escape from our current reality and I recommend it highly.
Read more
11 people found this helpful
Report abuse

Tony Acres
5.0 out of 5 stars Unique, like the man himself
Reviewed in the United Kingdom on 6 December 2021
Verified Purchase
Written with a warmth and love for life that is truly rare. This is also unique in that Mel Brooks does not have a bad word to say about anyone, no one, not a soul. A whole book of opportunities to take a swipe at someone, repay a bad turn, generally get even with someone somewhere? Not a single mention anywhere, unless you're a piece of dry chicken or a glass of poor wine.
A life spent making the world laugh is undoubtedly a life well lived, Mel Brooks tells his story with laughs and acknowledgements to all the people he has worked with over the last ninety five years. Can't wait for the second volume.
Read more
13 people found this helpful
Report abuse

Romsey123
5.0 out of 5 stars Get this book
Reviewed in the United Kingdom on 30 November 2021
Verified Purchase
It's hysterical and a must for MB fans. Only arrived today and I can't put the book down, brightened my whole year :)
Read more
10 people found this helpful
Report abuse

tonedef
5.0 out of 5 stars A laugh out loud read
Reviewed in the United Kingdom on 6 December 2021
Verified Purchase
The only problem with this book is that it leaves the reader wanting more (hurry up Mel and finish part 2). What a life!
Read more
9 people found this helpful
Report abuse

fatgazbo
5.0 out of 5 stars So Good I Bought It Again!
Reviewed in the United Kingdom on 21 April 2022
Verified Purchase
My brother bought me this book for Christmas and I started reading it on hard copy before then buying it on Kindle so it was more portable.
I have been a fan of Mel Brooks for more years than I care to remember and this is delivered in exactly the way you would expect such a bundle of energy to write. He even apologises before he goes off at a tangent to tell a (sort of) linked stories; such as his upbringing (that he describes as not quite orthodox), his time in the army and his marriage to the lovely Anne Bancroft.
As I read it I found myself digging out my old Mel Brooks films to watch again.
By the end of the book if Mel isn't on your list of ideal dinner guests then you've read the wrong book!
Read more
Report abuse
See all reviews