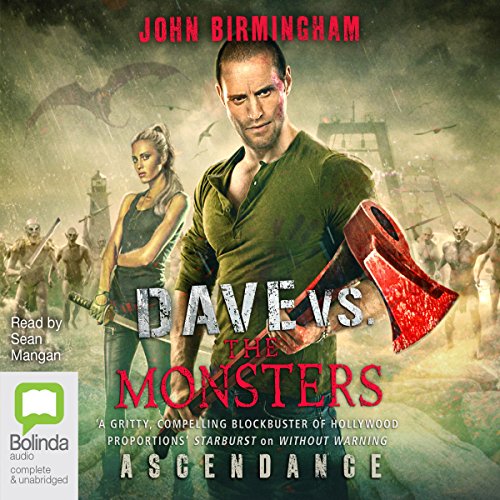 There were too many of them. Lucille was nowhere Dave could see, and only a faint mournful sigh reached him from where she lay.... It was time to die, the hero's journey over.

New York is on fire, the streets are overrun, and the Demon Horde is feasting. With the world's greatest city in chaos, all eyes are on Dave Hooper, the superhero destined to save mankind.

But hero or not, Dave is just one man, and he's short of allies. He soon finds himself relying on Karen Warat: art dealer and Russian deep-cover agent. Smart, dangerous and armed with a magic sword, Dave knows not to trust her. He also knows that without her, New York will fall.

While the United States military try desperately to hold off the Horde, Dave and Karen realise that the monsters have a powerful new weapon - one of their best warfare strategists is working for them. With the enemy using the military's own tactics against them, defeat seems imminent.

To have any chance of survival, mankind needs its champion more than ever. The world needs Dave to become the hero he is meant to be.

Read more
©2015 John Birmingham (P)2015 Bolinda Publishing Pty Ltd
Previous page
Next page
Learn more about membership
By completing your purchase, you agree to Audible’s Conditions Of Use and Privacy Notice.
Sold and delivered by Audible, an Amazon company

4.3 out of 5 stars
4.3 out of 5
64 global ratings
How are ratings calculated?
To calculate the overall star rating and percentage breakdown by star, we don’t use a simple average. Instead, our system considers things like how recent a review is and if the reviewer bought the item on Amazon. It also analyses reviews to verify trustworthiness.

R. A. Prideaux
4.0 out of 5 stars This is not the John Birmingham you are looking for...
Reviewed in Australia on 4 June 2015
Verified Purchase
A significant departure from his previous efforts, but one that works; and well.
I was engrossed by the first series, (which saw a US fleet time shifted to 1941), which while it pinched an idea from a truly atrocious piece of Hollywood dreck, it was done extremely well. This new series is a bit of a departure!
"Dave Hooper", is not your average hero. Whilst he does achieve things his basic character is flawed, to say the least. The series appears to have been written very quickly - hence a missing star, but again, Mr Birmingham has delivered a fast paced, action story with a very interesting take on several aspects of alternate history, demons et al. More would be a "spoiler".
We are up to the third book and so far the pace has been consistent, the characters well drawn (if a little off beat) and in total a very enjoyable, light hearted read. Highly Recommended.
Read more
Helpful
Report abuse

Tinaline
5.0 out of 5 stars Brilliant!
Reviewed in Australia on 2 June 2018
Verified Purchase
Another brilliant book in the Dave Hooper saga! Adding in the additional characters into the storyline as well as adding in his family made for excellent reading. I hope the series continues.
Read more
One person found this helpful
Helpful
Report abuse

Ozbloke
2.0 out of 5 stars you create a brilliant premise but then ultimately fail to deliver a worthy ...
Reviewed in Australia on 10 June 2015
Verified Purchase
I was looking at the inside cover of this novel after finishing it, and I was surprised to realise that I have read every single book that John Birmingham has every published. However...I don't think I will read any of his future novels - especially any more of his 'action fiction' . I'm sorry John, it stinks. With the Dave Hooper series, and the Weapon of Choice series, you create a brilliant premise but then ultimately fail to deliver a worthy product. The wooden dialogue, the 'humour' (what happened? 'Felafel' was one of the funniest things I ever read!), the cringey attempt-to-be-hip cultural referencing, the unnecessary gore, the wooden characterisations (Dave Hooper's homer simpson meets 'the hangover' characterisation was just terrible, John. Terrible), the plot speeds, which lurch around like a scratched CD.... I could go on, but instead let me say I think you really play to your strengths with your excellent journalistic articles, Dopeland etc. Nonfiction.
Read more
Helpful
Report abuse

Andre K. Foulon
4.0 out of 5 stars More of the same...
Reviewed in Australia on 31 August 2016
Verified Purchase
... ain`t necessarily a bad thing, especially when it comes from JB. Ok, do his Dave series is unabashed macho escapism, but he does it so well we can`t wait for the next instalment. Put away that reefer, Jonno, and hit them keys like you meant it!
Read more
One person found this helpful
Helpful
Report abuse

marcus woodlock
5.0 out of 5 stars Give me more
Reviewed in Australia on 16 June 2015
Verified Purchase
I've read all the America under the dome books, the world war books and now the emergence trilogy. John's writing is powerful, original and enticingly different. I want, no, need more. Go big with super Dave please. Sorry to your family for your absence but you need to write more John. The price of popularity.
Groupof9
Read more
One person found this helpful
Helpful
Report abuse

WONTOLLA
4.0 out of 5 stars Good story line
Reviewed in Australia on 22 November 2015
Verified Purchase
Good story line. Good plot. Very good involvement of the she-champion. And our hero is improving. If he could focus more it would be a 5/5.
Read more
Helpful
Report abuse

Gary Wilkinson
4.0 out of 5 stars When is novel 4?
Reviewed in Australia on 1 October 2017
Verified Purchase
Have loved all three books. Pure escapism at its best! A fun read, but where is the next book or series?
Read more
Helpful
Report abuse
See all reviews

Dave
4.0 out of 5 stars Modern warfare aware Orcs
Reviewed in the United States on 13 August 2015
Verified Purchase
Another good book in the series of Super Dave. I wonder if we will actually see Dave start to think before just mouthing off in the next book. All the psychic smack downs he's been getting should at least start getting through.
Looking for to some proactive responses from the super team, and I'm wondering if all those who have been upgraded are going to be from North America or if other nationalities will be involved, or will it be another "USA saves the day".
Read more
Report abuse

Kindle Customer
5.0 out of 5 stars More of the same great style and substance!
Reviewed in the United States on 30 April 2015
Verified Purchase
A rollercoaster ride of awesome! Funny, frenetic and chock full of pop culture, rapier wit and all the neat 'splodey stuff we've come to expect from Mr. Birmingham's fine work.
Bought all three books in the series and literally couldn't put them down: finished the first two in a day each and would've done the same for the third if that annoying work thing hadn't gotten in the way.
My only ciriticism is that there aren't already another four or more adventures of The Dave available for me to offer up my hard-earned green.
Huzzah!
Read more
Report abuse

andrew from australia
5.0 out of 5 stars Good fun read
Reviewed in the United States on 22 July 2015
Verified Purchase
Great book... An excellent addition to the series. I'm looking forward to the further books in the series as more heroes come forward.
I love the somewhat tongue in cheek style of writing and the flawed main character.
Read more
Report abuse

Staple1410
5.0 out of 5 stars another ripper yarn
Reviewed in the United States on 15 May 2015
Verified Purchase
Another great story from john birmingham,fast paced , interesting developments for characters, hope there is another book in the series
Read more
Report abuse

R McQuinlan
5.0 out of 5 stars Awesome series cant wait till next instalment
Reviewed in the United States on 12 August 2016
Verified Purchase
John Birmingham is one of my all time favourite authors, these books are well worth a read - thoroughly recommend them
Read more
Report abuse
See all reviews