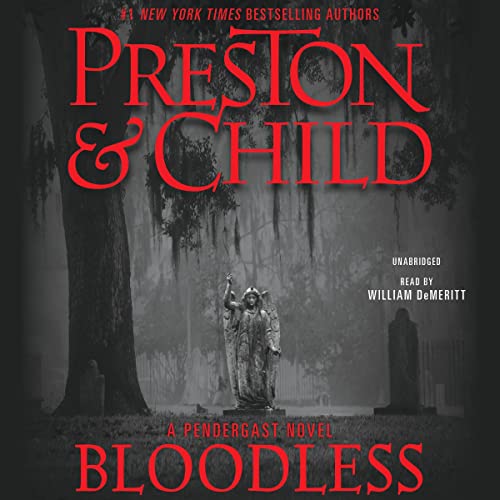 In this latest instalment of the number one New York Times best-selling series, FBI Agent Pendergast faces the strangest, most challenging puzzle of his career, when bodies - drained to the last drop of blood - begin appearing in Savannah, GA.

A fabulous heist: on the evening of November 24, 1971, D. B. Cooper hijacked Flight 305 - Portland to Seattle - with a fake bomb, collected a ransom of $200,000, and then parachuted from the rear of the plane, disappearing into the night...and into history.

A brutal crime steeped in legend and malevolence: 50 years later, Agent Pendergast takes on a bizarre and gruesome case: in the ghost-haunted city of Savannah, Georgia, bodies are found with no blood left in their veins - sowing panic and reviving whispered tales of the infamous Savannah Vampire.

A case like no other: As the mystery rises along with the body count, Pendergast and his partner, Agent Coldmoon, race to understand how - or if - these murders are connected to the only unsolved skyjacking in American history. Together, they uncover not just the answer...but an unearthly evil beyond all imagining.

4.4 out of 5 stars
4.4 out of 5
9,301 global ratings
How are ratings calculated?
To calculate the overall star rating and percentage breakdown by star, we don’t use a simple average. Instead, our system considers things like how recent a review is and if the reviewer bought the item on Amazon. It also analyses reviews to verify trustworthiness.

cresc
2.0 out of 5 stars Started off strong but...alas! Honest criticism!
Reviewed in Australia on 30 August 2021
Verified Purchase
CARE FOR SPOILERS:

I was really intrigued and pulled in by the take on DB Cooper and the mystery of how the "murders" were committed. The story for me was well on it's way to 4 or 5 stars.

Unfortunately, the build up and intrigue came crashing down in the final act of the book. Did not buy into the aliens from another dimension plot at all. Character development into side characters like the cop commander, the photographer lady, the 2 'journalists', the annoying senator were all more or less completely wasted and irrelevant.

It seems like the authors won't ever be able to regain the creative heights of the best books in the series (Relic, Cabinets of Curiosities, A Still Life with Crows) where fantastical ideas (e.g age extension serums or genetically mutated or warped humans) are done in such a way where it doesn't seem completely unrealistic and contrived and where the side characters all play a key part to the overall plot.
Read more
Helpful
Report abuse

Kindle Customer
5.0 out of 5 stars Agent Pendergast
Reviewed in Australia on 27 August 2021
Verified Purchase
Another wonderful Pendergast novel by two amazing authors. I have read every book in this series and am hoping it will go on with Constance Green adventures.
I hope that you enjoy their books as much as I did
Read more
Helpful
Report abuse

vicky hamilton
5.0 out of 5 stars Another hit
Reviewed in Australia on 1 September 2021
Verified Purchase
Great book from these authors, as usual. This one a little more out there than previous books but enjoyable nonetheless. Can’t wait for the next in the series to see what Pendergast and Constance get up to. Hoping to see Coldmoon again as well.
Read more
Helpful
Report abuse

J. Wain
2.0 out of 5 stars Why was the well known d b cooper plane hijack included as the first story.the remaining story was rubbish
Reviewed in Australia on 27 September 2021
Verified Purchase
Absolute garbage full of errors in grammar and tense. Word, word word ect etc so I can quit this screen. Etc et. Etc
Read more
Helpful
Report abuse

Michael Loader
5.0 out of 5 stars Pure Pendergast
Reviewed in Australia on 18 October 2021
Verified Purchase
An inspired addition to this outstanding series. Pendergast at his very best combining classic FBI case work while boldly breaking into undiscovered realms. Great entertainment and totally satisfying to long terms fans of this series and the intriguing collaboration of the two authors.
Read more
Helpful
Report abuse

TyndaFlat
5.0 out of 5 stars Best ever
Reviewed in Australia on 6 August 2022
Verified Purchase
Just completed 20 of the Agent Pendergast series. Cant wait for the next one in Jan 2023. Preston and Child are Masters in their craft. Pendergast is an extraordinary, enigmatic charecter.
Read more
Helpful
Report abuse
See all reviews

Hampshire J
3.0 out of 5 stars Ruined by just a few pages
Reviewed in the United Kingdom on 18 October 2021
Verified Purchase
I've been reading the Pendergast books for many years and some are excellent and a few average.

Unlike other people reviewing this book, I can accept that there was a creature and time travel as part of this story. After all, the series began with Relic and has probably veered away from that to appeal to wider audiences.

However, SPOILER ALERT, it's the scenes where Pendergast travels to the lair of the creatures that are just plain crazy. It's like a deus ex machina where the authors had no idea how to really end this because they'd created a foe too powerful. And the time paradox it would have created wasn't resolved as if the creature was killed before it travelled to our world, how could there have been all that destruction or any deaths to begin with?

Apart from that, it's a good story and goes back a bit to the series roots. But the ending doesn't fill me with a lot of hope for book 21 if it focuses on more time travel.
Read more
2 people found this helpful
Report abuse

Mr Darren Adams
1.0 out of 5 stars Where did it all go wrong !
Reviewed in the United Kingdom on 22 August 2021
Verified Purchase
As an avid fan I look forward to the latest release and finished reading this last night. I am convinced the authors have been on an acid trip what stated out as a normal mystery crossed the realm into horror slash science fiction a large monster flying between dimensions draining savannah residents of blood. How will Constance survive in the past will Pendergast commander the Tardis to fly through space and time to save her. The best thing the authors could do is retract this book.
Read more
2 people found this helpful
Report abuse

Sandra Brookes
5.0 out of 5 stars Latest Pendergast book!
Reviewed in the United Kingdom on 4 September 2021
Verified Purchase
This is book 20 in the Pendergast series and I was expecting a well written book similar to the others, (each with a different surprise in store). I couldn’t have been more wrong.
The authors have written a story which links FBI law enforcement with science and the supernatural. They are always bang up to date with the technology they include, but this book takes that to a whole new level. I was also pleased to see the long running situation between Pendergast and his ward progress and hope we will see more of that in the next book! Great read, thank you.
Read more
Report abuse

MW
2.0 out of 5 stars A fall from grace
Reviewed in the United Kingdom on 5 September 2021
Verified Purchase
God I hate to write this. I’ve loved every single book in this series… until now. This felt forced, clumsy and rushed. It’s like they had an idea for Constance and wrote an absurd story to fulfil it. Read all the others, skip this one.
Read more
One person found this helpful
Report abuse

Chris Rochester
3.0 out of 5 stars Not one of their best novels
Reviewed in the United Kingdom on 9 November 2021
Verified Purchase
Stuck with it to the end but didn’t enjoy just how ridiculously bizarre it was.
The creature was utter ludicrous
Read more
One person found this helpful
Report abuse
See all reviews