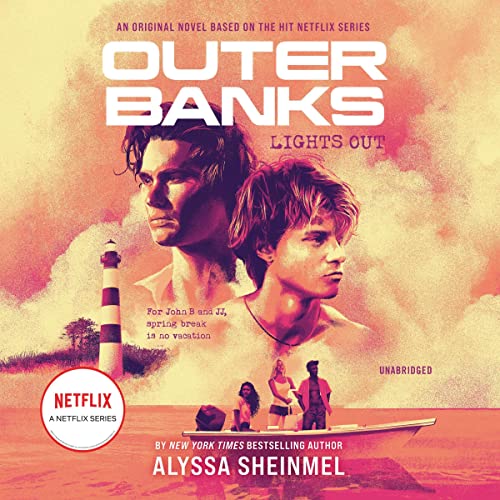 An original YA novel based on the hit Netflix series Outer Banks, written by New York Times best-selling author Alyssa Sheinmel, featuring JJ and John B in a brand-new, high-octane adventure

It’s spring break in the Outer Banks, and the islands are swarming with rich tourists. The last thing JJ and John B want to do is spend their week watching Kooks in action, so they plan a fishing getaway to the notoriously dangerous Frying Pan Shoals - nicknamed “Graveyard of the Atlantic” for good reason.

Turns out they aren’t the only adventure-seekers at sea. Soon after they set sail, the friends run into the captivating Savannah, who hitches a ride aboard the HMS Pogue when the weather worsens and her boyfriend leaves her stranded. As a violent storm sets in, the three realize the only place to safely ride out the squall is a creepy, abandoned hotel on the shoals’ lighthouse platform. Or is it abandoned? It doesn’t take long for the three teens to realize they may not be alone...

Further complicating the life-or-death adventure is a mounting attraction between JJ and the secretive Savannah - the closer JJ gets to her, the more he realizes he’s playing with fire. Even if they get out of the shoals alive, can a Pogue-Kook romance survive the high-stakes shores of the Outer Banks?

Read more
©2021 Outer Banks ™/© 2021 Netflix. Used with permission. Published in 2021 by Amulet Books, an imprint of ABRAMS, New York. All rights reserved (P)2021 by Blackstone Publishing
Previous page
Next page
Learn more about membership
By completing your purchase, you agree to Audible’s Conditions Of Use and Privacy Notice.
Sold and delivered by Audible, an Amazon company

4.7 out of 5 stars
4.7 out of 5
329 global ratings
How are ratings calculated?
To calculate the overall star rating and percentage breakdown by star, we don’t use a simple average. Instead, our system considers things like how recent a review is and if the reviewer bought the item on Amazon. It also analyses reviews to verify trustworthiness.

Nicky George
2.0 out of 5 stars Not as expected
Reviewed in the United Kingdom on 23 February 2022
Verified Purchase
I got this book as I thought it would be like the series on Netflix. However it is just based on jj and John b. It did get very confusing and was a bad story line.
Read more
One person found this helpful
Report abuse

Francesca
5.0 out of 5 stars very easy read
Reviewed in the United Kingdom on 15 January 2022
Verified Purchase
it was so good very easy read I read it all in one day. Definitely recommend:)
Read more
One person found this helpful
Report abuse

Rebekah
3.0 out of 5 stars Good
Reviewed in the United Kingdom on 19 April 2022
Verified Purchase
This book has a good story it is not amazing and the ending felt a bit rushed but other than that was a good quick read
Read more
Report abuse

Clodagh
5.0 out of 5 stars Best book I’ve every bought amazing quality and delivery was so quick
Reviewed in the United Kingdom on 3 April 2022
Verified Purchase
Great book shipping was amazing came in 6 days quality was also amazing honestly I have no complaints very good service. 100% recommed every satisfied!!!
Read more
Report abuse
See all reviews