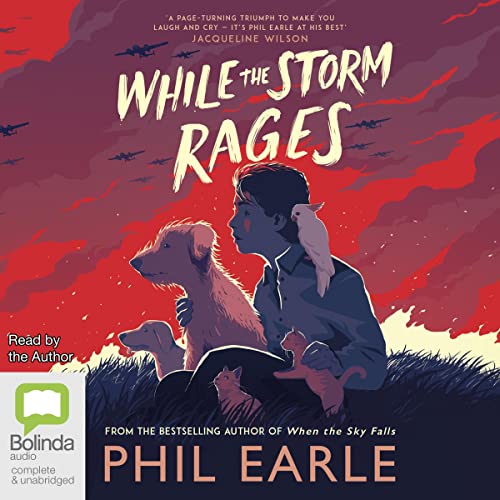 While the Storm Rages

Can a boy possibly save the animals and lead them all to the promised land? A thrilling of adventure involving a stolen ark, a motley crew of animals and a crashed Spitfire, from award-winning author, Phil Earle.

September 1939. Britain is on the brink of war.

As Noah Price’s dad marches off to fight, he asks his son to honour one vital promise: that he will keep their dog, Winn, safe. No matter what. Noah agrees, but his best intentions are crushed when the government advises people to have their pets put to sleep as part of the war preparations. Children are heartbroken; queues outside vets’ surgeries stretch for miles. But Noah is a resourceful and impetuous child. He won’t just do what he is told. Far from it. With his two friends in tow, he makes a pledge—to go on the run and save as many animals as he can, whatever the cost.

4.4 out of 5 stars
4.4 out of 5
21 global ratings
How are ratings calculated?
To calculate the overall star rating and percentage breakdown by star, we don’t use a simple average. Instead, our system considers things like how recent a review is and if the reviewer bought the item on Amazon. It also analyses reviews to verify trustworthiness.

Lollie
5.0 out of 5 stars Wow
Reviewed in the United Kingdom on 3 August 2022
Verified Purchase
This book was sensational. So powerful and I am now an emotional wreck at the end of it all. What an incredible story, beautifully told.
Read more
Report abuse

Chrissie
5.0 out of 5 stars Incredible
Reviewed in the United Kingdom on 5 August 2022
Verified Purchase
Loved this book. Phil has done it again with an amazing WWII story.
Read more
Report abuse
See all reviews