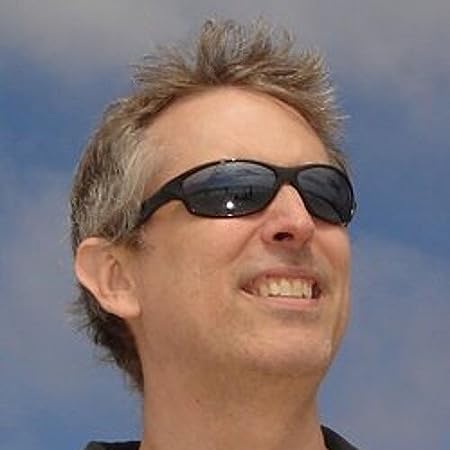 About B. V. Larson

Check out the author's Homepage: BVLarson.com

USA Today Bestselling author B. V. Larson has written more than fifty books with over three million copies sold. He writes in several genres, but most of his work is Science Fiction. Many of his titles have been professionally produced as audiobooks and print as well as ebook form. Thirty-one of them have been translated into other languages and distributed by major publishers in foreign countries. He writes college textbooks in addition to fiction, and his three-book series on computer science is currently in its sixth edition. 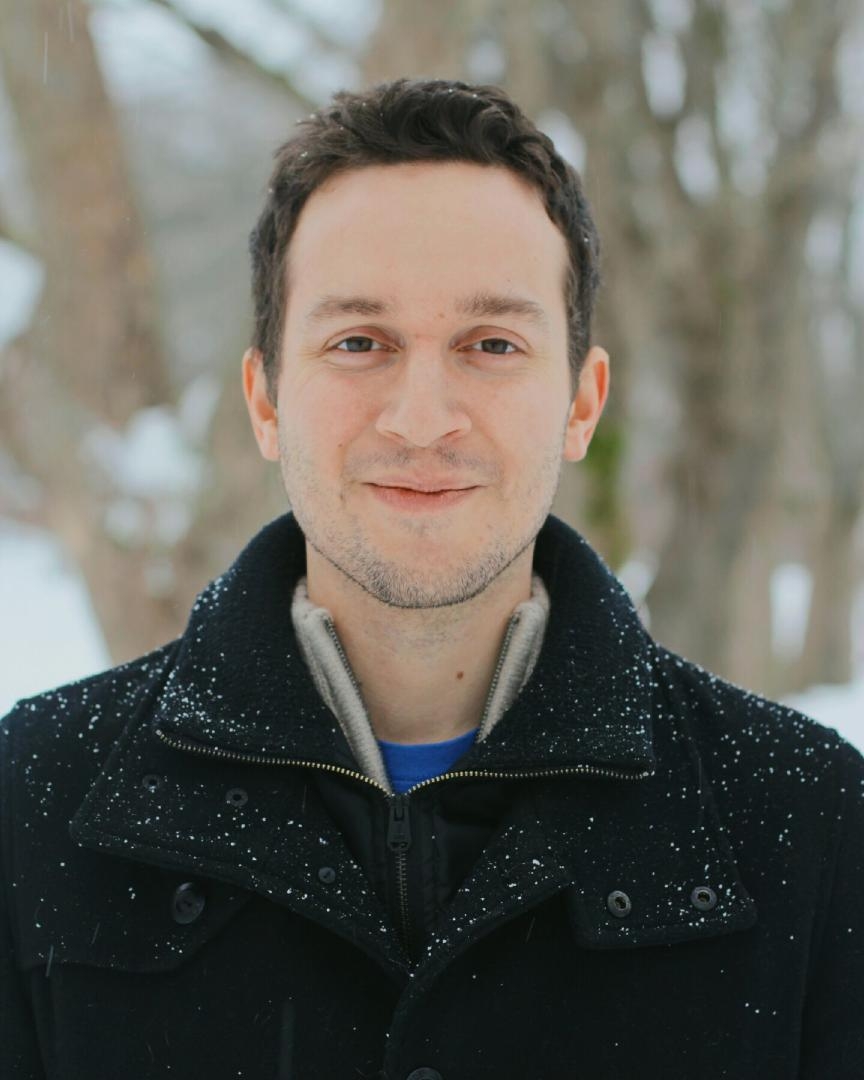 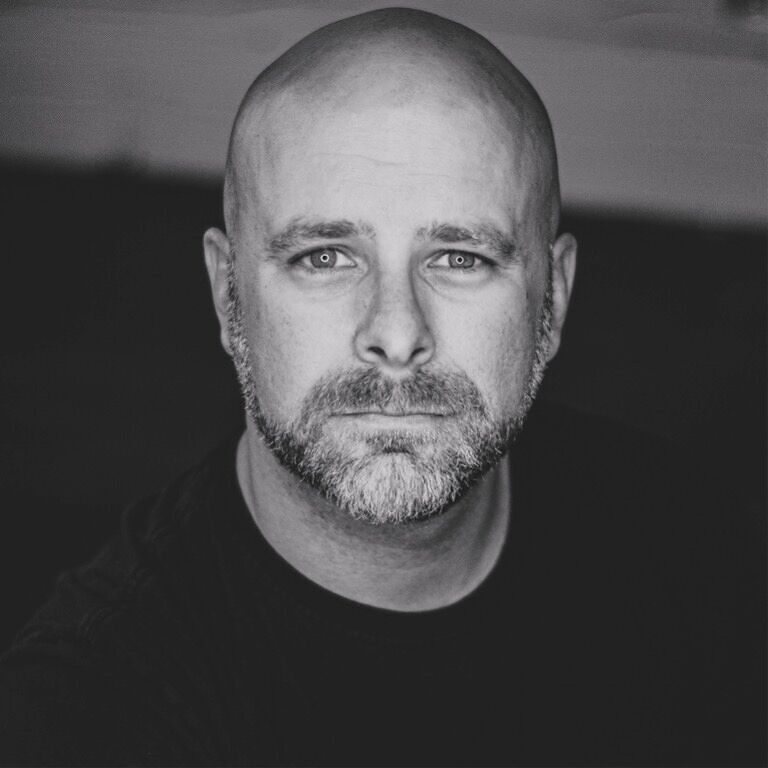 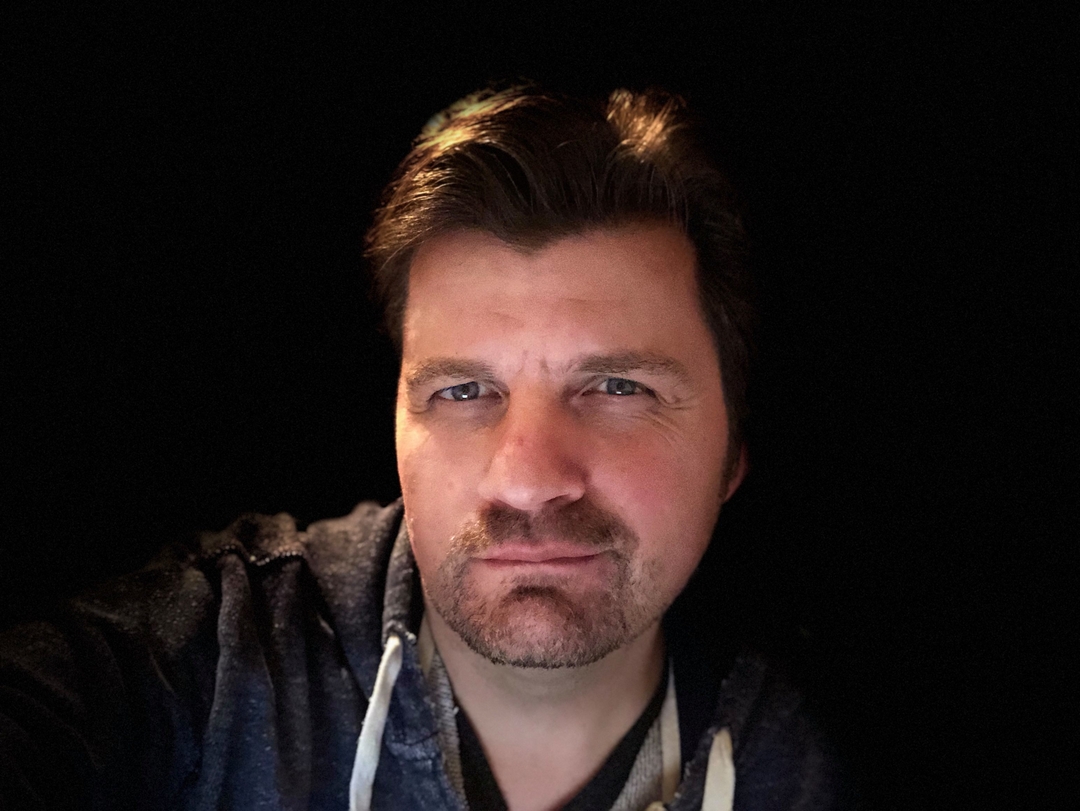 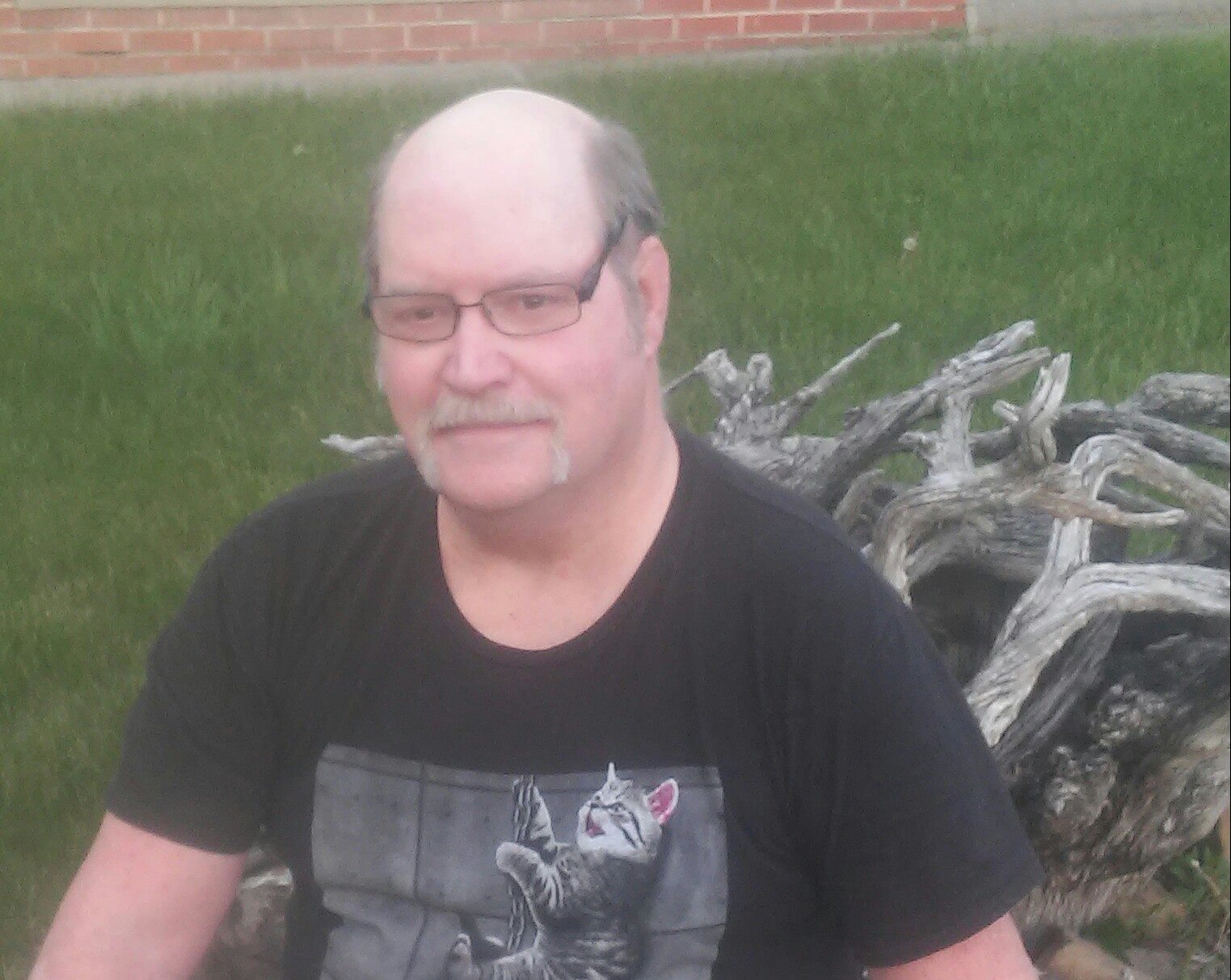 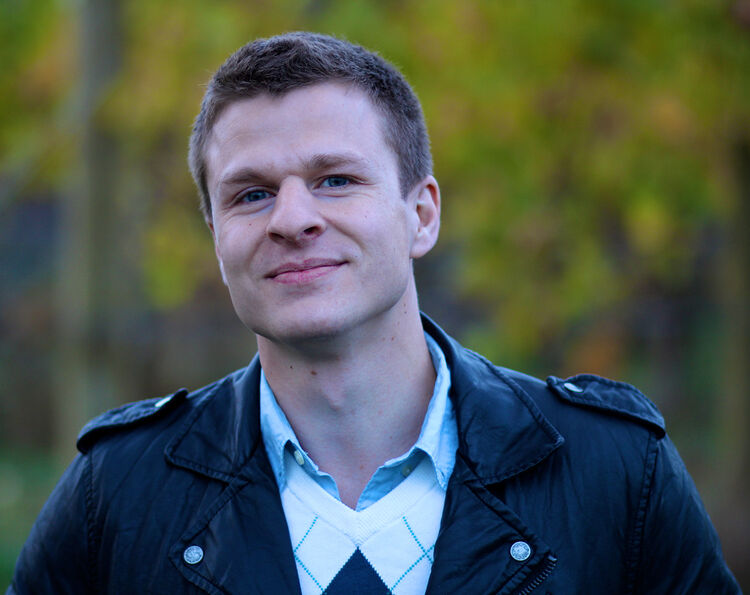 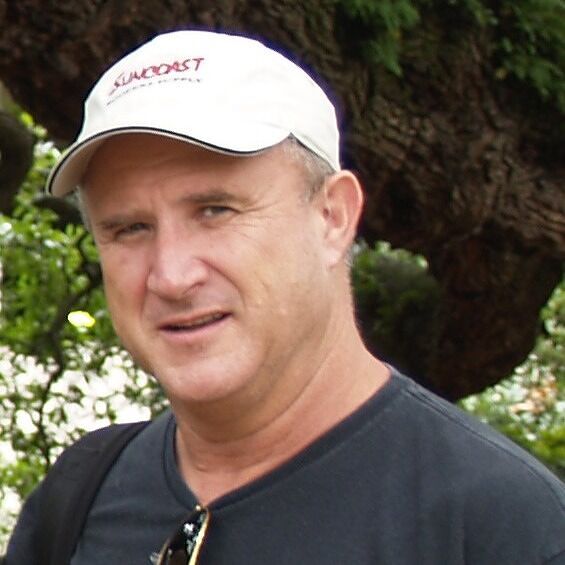 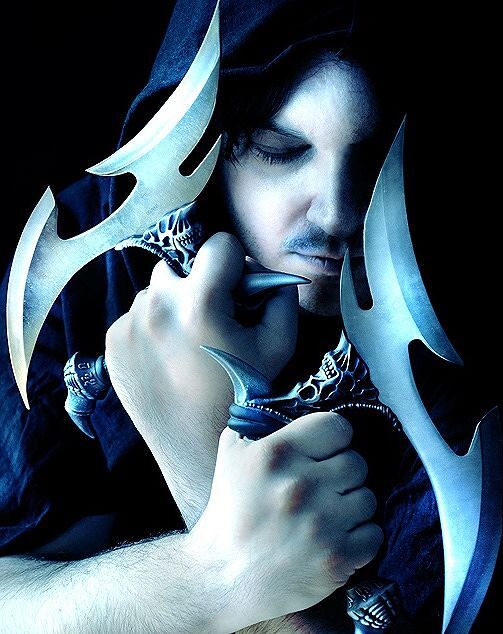 Books By B. V. Larson 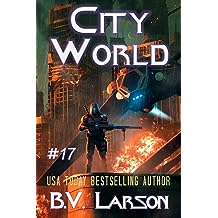 City World (Undying Mercenaries Book 17) 04/03/2022
by B. V. Larson
( 2,219 )
$10.00
Earth’s entire fleet and all her legions are conscripted by the Galactics. Centurion McGill of Legion Varus is among countless troops pressed into service as cannon fodder for the Empire.

Not everyone on Earth is happy with the demands of the Galactics. Earth has built up her military for decades, and now she might lose everything in a foreign war no one understands. As the man who has killed more Mogwa than any other human in history, McGill is approached and given a mission. He has a fateful decision to make. Will he serve Earth’s overlords faithfully, or will he assassinate the arrogant alien leaders? 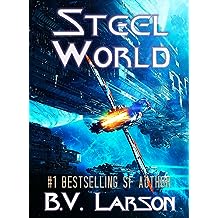 The Galactics arrived with their battle fleet in 2052. Rather than being exterminated under a barrage of hell-burners, Earth joined their vast Empire. Swearing allegiance to our distant alien overlords wasn’t the only requirement for survival. We also had to have something of value to trade, something that neighboring planets would pay their hard-earned credits to buy. As most of the local worlds were too civilized to have a proper army, the only valuable service Earth could provide came in the form of soldiers…someone had to do their dirty work for them, their fighting and dying.

I, James McGill, was born in 2099 on the fringe of the galaxy. When Hegemony Financial denied my loan applications, I was kicked out of the university and I turned to the stars. My first campaign involved the invasion of a mineral-rich planet called Cancri-9, better known as Steel World. The attack didn’t go well, and now Earth has entered a grim struggle for survival. 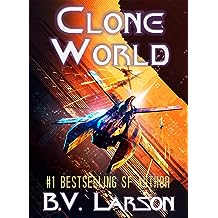 Clone World (Undying Mercenaries Book 12) 07/09/2019
by B. V. Larson
( 528 )
$7.99
James McGill is called upon for a sabotage mission, one that only a man of his unique talents can handle. Unfortunately, he performs too well, and our enemies from Rigel are enraged. They come for us, and war is declared.

Both sides call for aid, and it comes from the Core Worlds in the form of two great fleets. The Civil War for the Empire’s Throne spills out into the provinces. In the center of Galaxy, fantastic fleets crush one another and burn thousands of inhabited worlds. When this conflict between the great powers spreads, humanity finds itself swept up in the storm.

Can McGill escape this disaster he’s created? Find out in CLONE WORLD, the twelfth book of the Undying Mercenaries series. 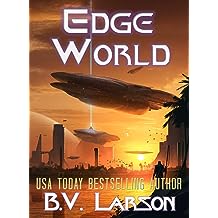 Edge World (Undying Mercenaries Book 14) 10/10/2020
by B. V. Larson
( 1,397 )
$8.99
A lonely planet circles a star on the very border of Province 921. Critical resources produced there are claimed by both the Mogwa and the Skay. War between the Galactic giants becomes more likely every day.

James McGill and Legion Varus are deployed to protect Edge World, a planet that rotates at a walking pace. Each day is as long as a year back on Earth. The sun-side of the world is baked with endless sunshine, the night-side is freezing and full of strange creatures. Living in an inhabitable zone on the edge of their world, a shadow-line between night and day, nomadic peoples roam the planet. It is these inhabitants Earth’s forces must protect.

Three fleets converge: the Mogwa, the Skay, and Earth’s growing armada. Peace talks are held, but then McGill opens his big mouth, and things go badly… 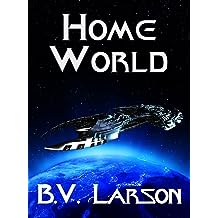 Home World (Undying Mercenaries Book 6) 13/02/2016
by B. V. Larson
( 700 )
$8.99
The Galactics arrived with their Battle Fleet in 2052. Rather than being exterminated under a barrage of hell-burners, Earth joined a vast Empire that spanned the Milky Way.

When the Earth is invaded by a rival empire, James McGill’s legion must defend the Home World. The top brass has complex plans, but none of that matters much to McGill, who chooses his own unique path. Traveling to star systems no human has ever visited, he searches for a technological edge to beat the enemy before it’s too late. Along the way he unleashes new terrors, triggering the biggest battles in human history.

HOME WORLD is the sixth book of Undying Mercenaries Series, a novel of military science fiction by bestselling author B. V. Larson. 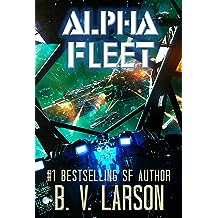 Captain Leo Blake is largely responsible for both our survival and our current predicament. He and his crew are infamous among the stars. As a result, when ships of an unknown configuration begin flowing out of swirling rifts above Earth, Blake is called upon again to deal with the problem.

But the approaching fleet isn’t what it seems. They’re employing an entirely new way to exterminate Rebels. They will accept nothing less than conquering Earth—or better yet, destroying all life on our planet.

Alpha Fleet is the third book in the Rebel Fleet series, the fourth book is on the way!
Read more
Other Formats:: Audible Audiobook , Paperback , MP3 CD
includes tax, if applicable 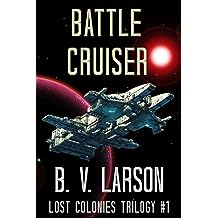 A century ago our star erupted, destroying Earth’s wormhole network and closing off trade with her colonized planets. After being out of contact with the younger worlds for so many years, Humanity is shocked when a huge ship appears at the edge of the Solar System. Our outdated navy investigates, both curious and fearful.

What they learn from the massive vessel shocks the planet. The lost colonies have survived—but the reunion isn’t going to be a happy one. Our descendants are vastly superior in the art of warfare. Worse, there are other beings undreamed of beyond the human frontier: strange, unfathomable…alien.

Battle Cruiser Defiant, the first capital ship to darken Earth’s skies, is tasked with exploring new passages to the younger planets. Old Earth must reunite with her children…but can humanity survive the inevitable conflicts? Captain William Sparhawk, determined to follow a path of honor and truthfulness, dares to rise to the challenge. 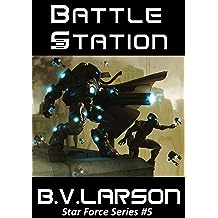 Battle Station (Star Force Series Book 5) 02/05/2012
by B. V. Larson
( 351 )
$6.25
In BATTLE STATION Kyle Riggs faces new challenges, new alien fleets and learns the secrets behind the war he has been fighting for years.

In the fifth book of the Star Force Series, the Eden system is in humanity’s grasp, but can they keep it? Star Force is weak after a long war, and many yearn to go home. Knowing the machines will return with a new armada eventually, Riggs seeks a more permanent solution. Along the way, worlds are won and lost, millions perish, and great truths are revealed. 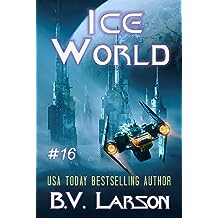 Ice World (Undying Mercenaries Book 16) 24/09/2021
by B. V. Larson
( 1,611 )
$8.99
Long before Earth began conquering her neighboring stars, Legion Varus was deployed on Tau Ceti. Valuable and highly illegal treasures were stolen during the campaign, but McGill never gave it a second thought.

The Tau haven’t forgotten him, however. For decades they’ve hunted and plotted, and at last they’ve found the pirate who robbed them. Tau agents invade Earth seeking revenge and profit. Caught up in violence and intrigue, McGill is given the task of finding out where the loot has gone and who was responsible for the theft in the first place. The hunt takes Legion Varus to ICE WORLD, a distant planet with an inhospitable climate. 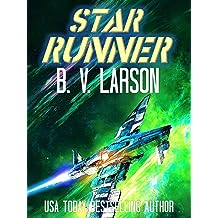 Captain Bill Gorman has mysteriously disappeared. His clone, set aside for a dark day like this, awakens and begins to put together the pieces. What’s gone wrong out on the frontier? Why are our colonies being attacked by aliens while the Conclave worlds dream of better days? And what happened to the original Captain Gorman? 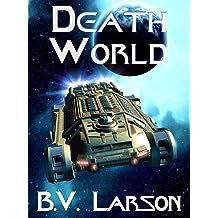 Death World (Undying Mercenaries Book 5) 27/03/2015
by B. V. Larson
( 774 )
$8.25
The Galactics arrived with their Battle Fleet in 2052. Rather than being exterminated under a barrage of hell-burners, Earth joined a vast Empire that spanned the Milky Way.

In DEATH WORLD, unknown aliens attack Earth. Their planet is uncharted, mysteriously having avoided detection for centuries. It's a world packed with the most vicious aliens humanity has yet to encounter.

James McGill is on the scene when the war comes home, and aliens strike a devastating blow. Bent on revenge, Legion Varus chases the raiders to the stars and discovers a growing alien menace. A cancerous species has invaded our region of the galaxy and must be dealt with. McGill learns why the Cephalopod Kingdom has yet to attack Earth and what's happening behind the scenes in the Core Worlds. Throughout, he upholds his unique sense of right, wrong and honor. 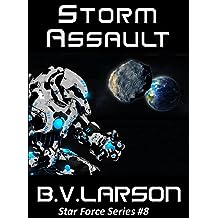 In STORM ASSAULT, the eighth book of the Star Force Series, the story moves in a new direction. Massive fleets are built by both Star Force and the Imperials—but there is a third player in the game: the Blues.

A three-way battle for the known star systems breaks out, with the fates of many worlds and species hanging in the balance. Riggs realizes he must destroy his enemies before they destroy him. Seeking justice and revenge, he gathers his strength and ventures out on a mission of conquest from the Eden System.

Humanity must fight to survive, and Riggs is the right man for the job.

STORM ASSAULT is a military science fiction novel by bestselling author B. V. Larson. To read the series in its entirety, start with SWARM, book #1.
Read more
Other Formats:: Audible Audiobook , Paperback , MP3 CD
includes tax, if applicable
Back to top
Get to Know Us
Make Money with Us
Let Us Help You
And don't forget:
© 1996-2022, Amazon.com, Inc. or its affiliates