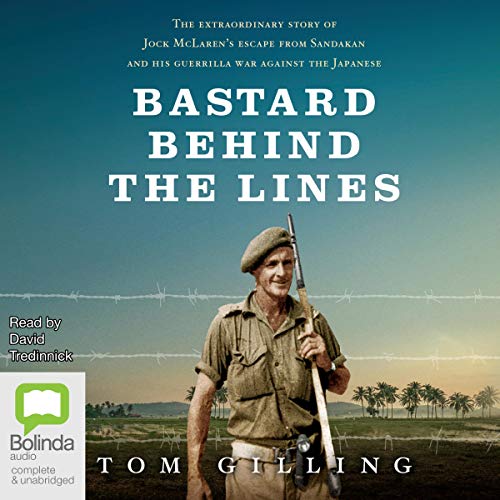 Bastard Behind the Lines: The Extraordinary Story of Jock McLaren's Escape from Sandakan and His Guerrilla War Against the Japanese

He escaped from Singapore's Changi prisoner of war camp to become one of Australia's great World War II guerrilla fighters. 'The way I look at it is this...when you're behind the line and get yourself into trouble, you've got to get your bloody self out irrespective of anybody else. That's why I like it.'

Scottish-born but a Queenslander to the bone, Jock McLaren was a true Australian hero. As a prisoner, he escaped twice, first from Changi and later from the infamous Sandakan POW camp in Borneo. After paddling a dugout canoe across open sea, he fought for two years with American-led Filipino guerrillas, his exploits so audacious the Japanese put a price on his head.

At the helm of his 26-foot whaleboat, the Bastard, McLaren sailed brazenly into enemy-held harbours, wreaking havoc with his mortar and machine guns before heading back out to sea. In early 1945, he joined Australia's secretive Z Special Unit, parachuting into Borneo to carry out reconnaissance and organise anti-Japanese resistance ahead of Allied landings. He cheated death on numerous occasions and saved his own life by removing his appendix without anaesthetic, using 'two large dessert spoons' and a razor blade.

4.0 out of 5 stars
4 out of 5
33 global ratings
How are ratings calculated?
To calculate the overall star rating and percentage breakdown by star, we don’t use a simple average. Instead, our system considers things like how recent a review is and if the reviewer bought the item on Amazon. It also analyses reviews to verify trustworthiness.

Jill
4.0 out of 5 stars A Good Read
Reviewed in Australia on 26 February 2022
Verified Purchase
I bought this for my son for Christmas reading and he loved it.
Read more
Helpful
Report abuse
See all reviews