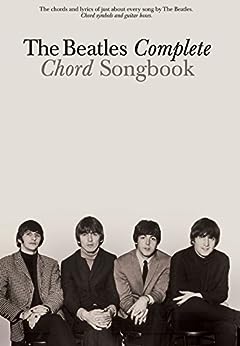 by The Beatles (Author) Format: Kindle Edition
See all formats and editions
Sorry, there was a problem loading this page. Try again.
(Guitar Chord Songbook). This great collection features all 194 songs written and sung by the Beatles, specially transcribed here for strumming guitarists, from the actual recordings, in the original keys. Each song includes chord symbols, guitar chord boxes and complete lyrics. Also features a helpful playing guide and a full discography.
Read more
Previous page
Next page
Due to its large file size, this book may take longer to download

The Beatles were an English rock band, formed in Liverpool in 1960. With members John Lennon, Paul McCartney, George Harrison and Ringo Starr, they became widely regarded as the foremost and most influential act of the rock era. Rooted in skiffle, beat, and 1950s rock and roll, the Beatles later experimented with several genres, ranging from pop ballads and Indian music to psychedelia and hard rock, often incorporating classical elements in innovative ways. In the early 1960s, their enormous popularity first emerged as "Beatlemania", but as the group's music grew in sophistication, led by primary songwriters Lennon and McCartney, they came to be perceived as an embodiment of the ideals shared by the counterculture of the 1960s.

4.7 out of 5 stars
4.7 out of 5
2,722 global ratings
How are ratings calculated?
To calculate the overall star rating and percentage breakdown by star, we don’t use a simple average. Instead, our system considers things like how recent a review is and if the reviewer bought the item on Amazon. It also analyses reviews to verify trustworthiness.

David Shearer
5.0 out of 5 stars A lifetime of songs in one book
Reviewed in Australia on 16 November 2020
Verified Purchase
I'm using this book in conjunction with my guitar lessons - challenging but achievable goals. Makes you realise what brilliant musicians they were.
Read more
One person found this helpful
Helpful
Report abuse
See all reviews

MiddleAgedRockStar
5.0 out of 5 stars All the greatest songs ever written
Reviewed in the United Kingdom on 1 September 2021
Verified Purchase
I downloaded this book for use with my iPad, with the Kindle app installed. The iPad, mounted on my music stand offers a perfect display of the selected page with the advantage of being able to increase the text size if needed. The book version is quite thick and therefore easy to lose your page as the book wants to keep closing itself. This obviously doesn’t happen with the downloaded version, and the pages always stay in perfect condition with no creased pages etc.
The page layout of the songs together with images of the chords on the fretboard is excellent, making it much easier to successfully play and sing some of the best songs ever written.
Read more
6 people found this helpful
Report abuse

Mr S.
5.0 out of 5 stars Paperback Writer did a good job.
Reviewed in the United Kingdom on 2 March 2018
Verified Purchase
Really pleased with this. Was looking to select Beatles songbook, of which there are a few, when came across this relevant YouTube review:-
"Beatles Complete Chord Songbook Review (Matt Blick)".

Bought it on basis of this great review and wasn't disappointed. Got from Musicroom with very quick (Prime) delivery.

Worth noting that this book binding allows it to stay open at the the page you select. My previous songbooks of this type have self closed - annoying!

Geordie Mc
4.0 out of 5 stars Seems accurate and clearly laid out.
Reviewed in the United Kingdom on 2 October 2018
Verified Purchase
Covers the songs I wanted well and seems accurate enough from the ones I’ve tried so far. As with other complete books you do get quite a few that you either don’t want or don’t lend themselves to solo acoustic guitar. But given the price that’s fine. Only issue is that despite what another reviewer said, it doesn’t open Flat very well and tends to close itself if you don’t really fold it hard or prop the page open somehow. This extra discography was a nice bonus.
Read more
One person found this helpful
Report abuse

Karl W.
5.0 out of 5 stars Fantastic.
Reviewed in the United Kingdom on 28 December 2013
Verified Purchase
In a standard single album chord book you get about 10-15 songs. For roughly the same price I got this chord book which is absolutely packed with songs. It is amazing value for money, all the songs sound great and I have yet to find any mistakes.

If you are a fan of The Beatles...buy this book. Also if you are just getting into playing the guitar, I would also highly recommend this book. There are a great deal of songs that are very simple to play and can really help you advance in your learning. There are also some medium skilled songs as well as some hard and very technical songs so as you progress in your learning there is always a song for your skill level.

The only way you could improve this book would be by making it a hardback as it is quite heavy and if you use it a lot, I can see the pages getting dinged up.
Read more
4 people found this helpful
Report abuse

bob
4.0 out of 5 stars some songs overly complicated.
Reviewed in the United Kingdom on 29 January 2014
Verified Purchase
Some song tabulature is over complicated.. I find the chord changes next to impossible to make for a large majority of the songs.
(although I'm not a great great guitarist.. so maybe it's not for beginners/early intermediate guitarists)

It is however as mentioned Complete and those songs that I could play sound right!

Note that it is just chords, no tab other than the chord layout is noted.
so here comes the sun etc you will just have chords where its probably easier to do it the "right" way.