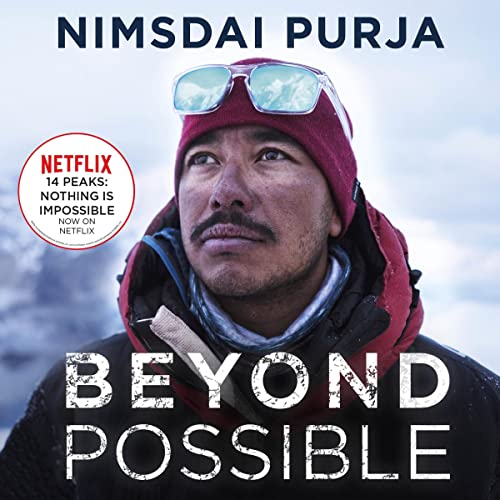 Beyond Possible: The man and the mindset that summitted K2 in winter

An SBS Gurkha soldier's account of how his tough Nepali upbringing and the lessons learned in his army life enabled his record-breaking conquest of all 14 of the world's 8,000m peaks in under seven months. What happens when ambition meets limitless imagination?

I did it in six months.

This is the inside story of my incredible adventure. As a kid in Nepal, barefoot in the mountains, I developed the resilience I needed to later join the Gurkhas, one of the most fearless forces in the British Army. Then in the Special Boat Service I served in some of the world's most dangerous warzones.

But my next challenge was even more of a test.

In Beyond Possible I reveal how I conquered the world's most dangerous peaks, breaking several world records in the process. With my elite training, I was able to adapt quickly to the lethal conditions, rarely phased by the lung-burning temperatures or brutal winds. Fear became irrelevant because I had belief.

In the death zone, I came alive. But even after facing countless challenges, right at the peak of my achievements, my world fell apart when my mother was hospitalised.

But I survived and ultimately conquered the most deadly and hostile mountains on the planet. Beyond Possible is my story.

Read more
©2020 Nimsdai Purja (P)2020 Hodder & Stoughton Limited
Previous page
Next page
Learn more about membership
By completing your purchase, you agree to Audible’s Conditions Of Use and Privacy Notice.
Sold and delivered by Audible, an Amazon company

4.7 out of 5 stars
4.7 out of 5
2,180 global ratings
How are ratings calculated?
To calculate the overall star rating and percentage breakdown by star, we don’t use a simple average. Instead, our system considers things like how recent a review is and if the reviewer bought the item on Amazon. It also analyses reviews to verify trustworthiness.

There are 0 reviews and 43 ratings from Australia

thegasman
3.0 out of 5 stars Fantastic achievements in a rushed book.
Reviewed in the United Kingdom on 21 November 2020
Verified Purchase
Having followed Nims' plans and progress from the beginning I was interested to read the book. I devoured it in 2 sittings. It is a page turner and would appeal to a wide audience.

The accomplishments are clearly phenomenal as you'll likely know, but as a book I found it lacking in scope.

There is little technical detail of the mountaineering. The entire ascent of one peak (Manaslu) is written as follows: "I climbed to the very top and made my point". Earlier peaks have more words given to them, but the latter ones are largely give far too little justice and there is little interesting content here. Throughout there's interestingly little sense of the awe inspiring landscape conveyed.

The book is too brief when you consider the monumental story and written too simply. If Nims and the publishers had taken more time rather than rushing it out I think it could have been much improved. This is perhaps why the content decreases as the journey progresses.

There are rare moments of introspection when the overwhelming self belief drops away and he opens up about a mistake, for example a fall when unclipping on Nanga Parbat but this scope of openness isn't there enough. It is only when unexpected and unplanned things happen that the book truly comes alive.

The events that transpired on Annapurna, Kanchenjunga are phenomenal to read about and the sense of being there is strong. What happens is remarkable and the strength of Nims and his team is truly incredible.

Talking of his team, he is very proud to highlight and promote the skills of fellow Nepalese climbers and Sherpas which is great to see. Their own stories would be interesting to put down on paper for a more rounded account of some of the amazing ascents and descents and how they found the experience. Some of the team can be found on Instagram etc and are well worth following by the way. Input from them to the book would have been useful I feel.

Throughout following his achievements through social media the non stop positivity and (for want of a better term) self-aggrandisement was totally understandable and a strong thing to see. There was a huge sense of purpose which was obviously important to Nims own confidence and to pull in the financial support necessary.

This same style runs throughout the vast majority of the book and truth be told is over the top and off-putting with the repeated soundbites that an uninformed reader would frankly put down as ego.

What is perhaps most interesting is that these traits are undoubtedly what has enable Nims to be able to achieve all that he has (in and out of mountaineering). With reflection it does prove the power of self belief and self confidence which is Nims' strong message throughout the book. He's the only one to have done this journey and that's clearly what it takes.
Read more
73 people found this helpful
Report abuse

O
5.0 out of 5 stars The most phenomenal man walking on earth
Reviewed in the United Kingdom on 13 November 2020
Verified Purchase
Ultimately the book of the century, the man behind it, changing the entire concept of what’s possible. A beautiful account of the most testing missions. Nims’s ability to control his mind and achieve his goal shows us all how we can achieve our own goals. Nims also puts into perspective how SMALL many of our goals are. Probably the most inspiring book written for hundreds of years, backed by real trial and tribulation. What Nims has done has truly been, one great leap for mankind.
Read more
33 people found this helpful
Report abuse

Matt H.
2.0 out of 5 stars felt like a bit of an ego trip
Reviewed in the United Kingdom on 23 December 2020
Verified Purchase
I really tried to get into this book i just found it all about the author giving it the big 'I am'. His explanations of climbing everest were very basic and all about how he was better than everyone . I couldnt get into the book because of this so only read the first half. Perhaps he becomes more humble in the second half.

Never the less a great achievement by the author and some people may be inspired by the content.
Read more
21 people found this helpful
Report abuse

Gregory
1.0 out of 5 stars Egocentric perspective ruined what could have been good
Reviewed in the United Kingdom on 31 January 2021
Verified Purchase
Some of the content is interesting and don't get me wrong his life is very fascinating. However, like some other readers I just couldn't get past how self-centred and egotistical the narrative and perspective is! It just seems completely separated from reality and was so off putting I ran out of motivation to continue the book. If you're looking for something specific to mountaineering then this would be bareable, but if you're looking for a motivating and interesting autobiography I'd look elsewhere.
Read more
18 people found this helpful
Report abuse

Zarla
5.0 out of 5 stars World's Best Mountaineer
Reviewed in the United Kingdom on 18 January 2021
Verified Purchase
What a phenomenal guy! This fascinating, awe inspiring book tells the story of how Nims smashed the world record for summiting the world's fourteen highest mountains. The previous record was seven years and Nims and his team do it in only six months.

Not content with that, he moved on to the next challenge, and on 16 January 2021, Nims led a team of Sherpa climbers to the first ever winter ascent of K2!

Just blown away by this man who came from the most humble of beginnings in a small village in Nepal. I think a BBC documentary should be made about his life.

Really hoping that Nims writes another book about his K2 ascent and this time includes more detail about the scenery, weather and food.
Read more
12 people found this helpful
Report abuse
See all reviews