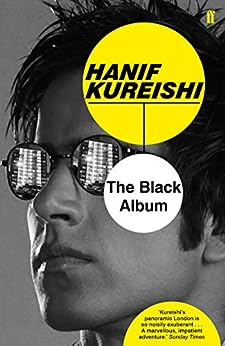 by Hanif Kureishi (Author) Format: Kindle Edition
See all formats and editions
Sorry, there was a problem loading this page. Try again.

The Black Album is the second novel by Hanif Kureishi, one of the most praised and influential writers of our times. It is set in London in 1989, the year after the second acid-fuelled 'summer of love' - also the year in which the Ayatollah Khomeini pronounced his infamous fatwa upon Salman Rushdie.

The Black Album is a portrait of a young Asian man being pulled in conflicting directions: one way by the lure of sexual and hallucinogenic hedonism, another by the austere certitudes of Islam. Shahid Hasan, a clean-cut kid from the provinces, comes to London after the death of his father. He makes his home in a Kilburn bedsit, falls in love with postmodernist college lecturer Deedee Osgood, and soon finds himself passionately embroiled in a spiritual battle between liberalism and fundamentalism.

Hanif Kureishi is the author of novels (including Something to Tell You, The Buddha of Suburbia, The Black Album and Intimacy), story collections (Love in a Blue Time, Midnight All Day, The Body), plays (including Outskirts, Borderline and Sleep With Me), and screenplays (including My Beautiful Laundrette, My Son the Fanatic and Venus). Among his other publications are the collection of essays Dreaming and Scheming, The Word and the Bomb and the memoir My Ear at his Heart. --This text refers to an out of print or unavailable edition of this title.

4.0 out of 5 stars
4 out of 5
104 global ratings
How are ratings calculated?
To calculate the overall star rating and percentage breakdown by star, we don’t use a simple average. Instead, our system considers things like how recent a review is and if the reviewer bought the item on Amazon. It also analyses reviews to verify trustworthiness.

Bottomless Hole
4.0 out of 5 stars A tale of intellectual conflict
Reviewed in the United Kingdom on 21 December 2014
Verified Purchase
This is one of those rare books that I have read before albeit seventeen years ago when pretending to be an idealistic student. I liked it back then and I love it now.

It tells the tale of Shahid, a British late-teenager of Pakistani origins and his desire to open his mind through reading and study at a run down, London college. There, he meets several people of huge, conflicting influence on his life. Deedee, a college lecturer, a child of the liberal sixties, stimulates both his mind and body, not always legally one might add. He also meets a group of more extreme muslim students and it is the conflict of satisfying Deedee and this group that is a central theme of this book. This is most evident in the issue of the fatwa issued on Salman Rushdie for his book, 'The Satanic Verses'. The group is determined to support the fatwa and hold their own book-burning session while Shahid wrestles with himself over this arguing several times that we should not be afraid of the written word and instead use it to challenge ourselves regularly.

What makes this book more fascinating for me this time around is the fact that I read it both before and after 9/11. It makes it so relevant and interesting and is a depiction of a small part of the timeline that lead up to that awful day.

This book is an absolute must for all lover of literature, no matter what the genre, to read. The book is not without Kureishi's sense of humour and his support for Shahid and his intellectual dilemmas is clear to see.

moh kazmi
3.0 out of 5 stars Good, not great.
Reviewed in the United Kingdom on 31 July 2019
Verified Purchase
Decent exploration between the extremes of religion and liberalism, but protagonist isn’t particularly likeable due to his lack of certainty about either. Some good dark humour at times, but a very exaggerated account of London.
Read more
Report abuse

Gerald Pieti
4.0 out of 5 stars A lesson in youth following Islam
Reviewed in the United Kingdom on 3 November 2014
Verified Purchase
The message was a warning about young men today
I now think about how the movement grows in the West.
I read it but kept putting it down.
full of extraneous description.
Worth reading
Read more
Report abuse

big bad Bob
2.0 out of 5 stars Depressing....
Reviewed in the United Kingdom on 30 March 2010
Verified Purchase
I bought this book as "The Buddha of Suburbia" (also by Kureishi) which I had intended to buy, was not in stock.

The cover blurb seemed good, promising an insight into modern issues of multiculturalism in Britain.

Sadly, the cover really is the best bit. The main characters are one-dimensional, and you can easily tell what each of them is going to do before you read it. The plot which these characters inhabit lurches about violently, leaving the reader feeling disconnected from the story. The main protagonist (and indeed, most characters in the book) are pretty unpleasant, and it is hard to feel empathy with them, or the situations they get themselves into. The depiction of London is of a trashy, drug-riddled waste ground devoid of dignity or hope (I know London is no utopia, but really it isn't THIS bad)

The main sticking point though, is that the multicultural issues are not addressed, just talked around or used to ignite another (predictable) confrontation. I really did want to like this book, and to get some newer understanding of a complex issue from it, however, it isn't likeable or complex in itself.

On the plus side, there are vivid little scenes that mad me laugh out loud, so 2 stars overall, but, I would not recommend it.

I noticed that "Buddha of Suburbia" is now back in stock - I will give this a go and hopefully see Kureishi in a more favourable light
Read more
8 people found this helpful
Report abuse
See all reviews
Report an issue
Does this item contain inappropriate content?
Report
Do you believe that this item violates a copyright?
Report
Does this item contain quality or formatting issues?
Report