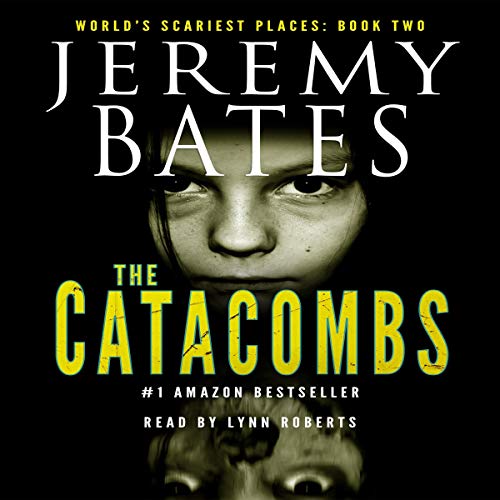 Over one million readers have taken the journey to the world's scariest places. Now it's your turn.

From USA Today and number one Amazon best-selling author Jeremy Bates comes a bone-chilling descent into the tunnels beneath Paris where an unknown evil awaits. AHWA winner for horror. For fans of Stephen King and Dean Koontz.

Paris, France, is known as the City of Lights, a metropolis renowned for romance and beauty. Beneath the bustling streets and cafés, however, exists the Catacombs, a labyrinth of crumbling tunnels filled with six million dead.

When a video camera containing mysterious footage is discovered deep within their depths, a group of friends venture into the tunnels to investigate. But what starts out as a lighthearted adventure takes a turn for the worse when they reach their destination - and stumble upon the evil lurking there.

4.4 out of 5 stars
4.4 out of 5
1,465 global ratings
How are ratings calculated?
To calculate the overall star rating and percentage breakdown by star, we don’t use a simple average. Instead, our system considers things like how recent a review is and if the reviewer bought the item on Amazon. It also analyses reviews to verify trustworthiness.

Debra
TOP 1000 REVIEWER
3.0 out of 5 stars Claustrophobic
Reviewed in Australia on 18 May 2016
Verified Purchase
I have read a few of these books now but this one wasn't my favourite. It was a good story with some of the same great qualities as the others - the slow unfolding of horror and the touches of humour throughout, in particular - but there wasn't really anything new and exciting. I did like the main character and the claustrophobic setting of the catacombs, but I wasn't riveted.
Read more
One person found this helpful
Helpful
Report abuse

Kindle Customer Tricia
5.0 out of 5 stars Wow
Reviewed in Australia on 1 February 2017
Verified Purchase
What a good book to read and what a terrible time they went through. Could hardly put the book down
Read more
One person found this helpful
Helpful
Report abuse

linnie990
5.0 out of 5 stars Scary
Reviewed in Australia on 18 November 2018
Verified Purchase
Great read. Hard to put down, Jeremy sure has s way with words
Hold your interest from start to finish.
Read more
One person found this helpful
Helpful
Report abuse

Jo Kelly
4.0 out of 5 stars Enjoyed the book
Reviewed in Australia on 3 January 2018
Verified Purchase
This is a very good read wasn't expecting the twist in the story but I really liked it. The details were amazing I could picture everything perfectly
Read more
One person found this helpful
Helpful
Report abuse

Michelle
5.0 out of 5 stars Good Suspense
Reviewed in Australia on 9 July 2015
Verified Purchase
A real page turner, was a much better read than I had expected. Definitely recommend it.
Read more
2 people found this helpful
Helpful
Report abuse
See all reviews

Stephen Clynes
3.0 out of 5 stars A regular urban legend of a hidden community.
Reviewed in the United Kingdom on 19 August 2018
Verified Purchase
The Catacombs are a network of tunnels beneath Paris which are said to extend more than 300 kilometers (186 miles) and reach depths of 30 meters (100), too deep for phone coverage. Follow 4 characters who go on an underground adventure to explore hidden treasures etc in this hidden world beneath the streets of Paris.

I thought this thriller from Jeremy Bates was okay. The structure of this novel is similar to his previous book, the Suicide Forest and offers the same huge vocabulary that helps make this story such an adult read. Jeremy manages to capture the atmosphere of the catacombs very well indeed when he writes…

I tried to imagine what it would be like to walk alone in utter blackness, with only your hand on the wall to guide you, your mouth dry from dehydration, your throat and lungs burning from the rank air and the countless hours of screaming for help, your feet weeping with blisters, your legs jellied with exhaustion, nothing around you but tunnels and more tunnels, ad infinitum.

Yes, it is clearly very scary being lost in complete darkness within 300 km of tunnels below Paris knowing that nobody can hear you scream. I felt Jeremy explained these fears very well indeed as our 4 characters tried to exit the nightmare they had become trapped within.

Ecowitch
3.0 out of 5 stars Now this is far more like it. Having read and been a let down ...
Reviewed in the United Kingdom on 22 January 2018
Verified Purchase
Now this is far more like it. Having read and been a let down by Bates first helping in the series I wasn't sure about this but I figured he deserved another shot and he pulled it back brilliantly. This isn't a faultless read by any means but at least this time the characters actually try to use their brains and weigh up options rather than charging in all gun-ho and the female characters have a bit of nounce about them and don't just do what they are told, in fact they end up doing a lot of the telling (much more realistic!). I'm not sure I totally liked the ending as it as a little too neat for me but then I do prefer not so happy endings in my horror genre (feel free to all me morbid) but the story was again brilliantly written, fast paced and gripping. I've never favoured an e-book over a proper book so much in my life (and I am both slightly ashamed and slightly proud). I'm looking forward to reading the next installment now.
Read more
2 people found this helpful
Report abuse

Caroline Broderick
5.0 out of 5 stars Horribly and brilliantly claustrophobic!
Reviewed in the United Kingdom on 6 February 2016
Verified Purchase
After downloading the freebie 'A Taste of Fear' I thought that Jeremy Bates was a pretty good writer. Fast paced, relatively believable situations and characters, gripping and a good read so I decided to buy this one next and it changed my mind from a pretty good writer to very rapidly becoming my favourite.

The story primarily takes place in the Paris catacombs where the characters are battling the terrain, the fear and occasionally each other. The description of the catacombs is uncomfortable and how he describes a 6'4" man trying to push himself through tiny crevices is horribly claustrophobic. Yes it takes a bit of a strange turn towards the end but, having read other books by Jeremy Bates, I think that's just his style and it definitely works.

One of the best stories I've read in a long time.
Read more
2 people found this helpful
Report abuse

Amberoo1
5.0 out of 5 stars Brilliant, Creepy nail-biting story.....
Reviewed in the United Kingdom on 13 March 2015
Verified Purchase
Great book! Keep me hooked from the start. Kept me wanting to know if they would escape alive- fast paced and excting. It reminded me of the film As above so below- very similar in places.
Ive read both books in the series so far and found this one a easier read and although the Japan spooky forest was a good read I preferred this one. What make these stories fascinating to me is that they based in real places! Are the newspaper exerts real?
Keep up the good work Mr Bates and look forward to reading your next book in the series...
Read more
3 people found this helpful
Report abuse