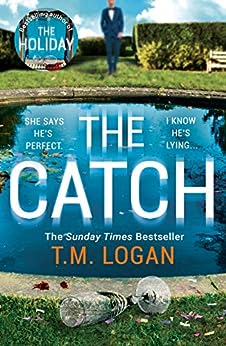 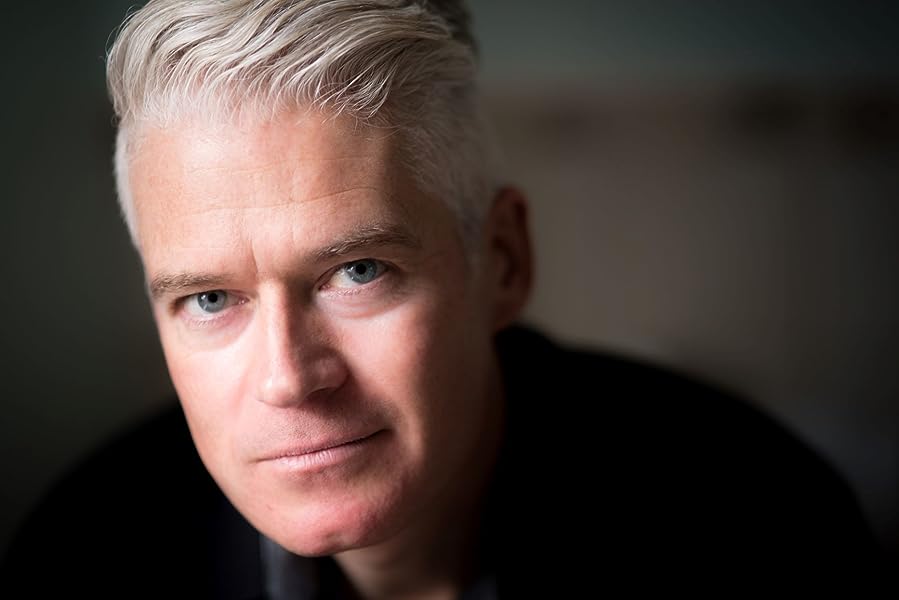 He caught me watching, and our eyes met. That was when it hit me.
There was something not quite right about my daughter's new boyfriend . . .

Ed finally meets his daughter's boyfriend for the first time. Smart, successful and handsome, Ryan appears to be a real catch. Then Abbie announces their plan to get married.

There's just one problem. Ed thinks Ryan is lying to them.

Who would you believe?

All of Ed's instincts tell him his daughter is in terrible danger - but no-one else can see it. With the wedding date approaching fast, Ed sets out to uncover Ryan's secrets, before it's too late . . .

The Catch is such utterly compulsive reading you just *have* to talk about it. it broke all records for the number of comments left when serialised by Pigeonhole.

'Smart, intense, and with a humdinger of a mid-point twist. I loved it' Gillian McAllister, Sunday Times bestselling author

'Taut, tense and compelling. T.M. Logan's talent is in creating characters with whom the reader instantly relates, and then thrusting them into situations that reflect our deepest fears. Thriller writing at its finest' Simon Lelic

'T.M. Logan's best yet. Fully delivers on its killer premise. Unsettling and so, so entertaining. The perfect thriller' Caz Frear

'Tricksy, twisting, instantly relatable and utterly compulsive. T.M. Logan excels at creating characters you really care about and exposing them to your very worst fears in a way that is always smart, suspenseful and thoroughly entertaining' C.M. Ewan

Praise for the master of the 'it-could-be-you' thriller, T.M. Logan:

'Assured, compelling, and hypnotically readable - with a twist at the end I guarantee you won't see coming' Lee Child

'Perfectly plotted and riveting with an exceptional ending' Diane Jeffrey

'A moral dilemma + a pacy plot = one gripping thriller. I stayed up far too late reading this one!' Louise Jenson

T.M. Logan was born in Berkshire to an English father and a German mother. He studied at Queen Mary and Cardiff universities before becoming a national newspaper journalist. He currently works in communications, in the field of higher education, and lives in Nottinghamshire with his wife and two children. Follow him on Twitter @TMLoganAuthor --This text refers to the paperback edition.

The complexities of this drama play out against the beautifully evoked backdrop of the Derbyshire landscape . . . Logan's storytelling is assured, the plotting is precise and the conclusion is convincing ― Daily Mail

Smart, intense, and with a humdinger of a mid-point twist. I loved it ― Gillian McAllister

T.M. Logan's best yet. Unsettling and so, so entertaining. The perfect thriller ― Caz Frear

Action-packed and full of tension . . . Logan keeps the twists going up to the dramatic ending ― Independent

Smartly laid red herrings keep you guessing. Delivered in short, punchy chapters, the pace of this crisp and clever thriller doesn't let up until the dramatic climax ― Sunday Mirror

Brace yourself, this one's a thrill ride ― Crime Monthly

This is a thriller sure to give you nightmares ― Woman

The Catch delivers the best kind of suspense thriller entertainment as Logan plays with our perceptions and tugs on our inner fears in this unsettling, twisting, turning journey through the fraught and complex landscape of our principal narrator Ed's troubled mind ― NW Newspapers Syndication

I read it in a day and it kept my attention away from current world events. If you enjoyed The Holiday, then you will love The Catch ― Trip Fiction

The best summer books are those that you simply can't put down and The Catch certainly fits the bill - offering up a tense and gripping thriller that will keep you hooked throughout ― Culture Fly
--This text refers to the paperback edition.

TM Logan's thrillers have sold more than a million copies in the UK and been translated into 22 other languages for publication around the world.

His latest thriller, TRUST ME, begins when a woman is asked to look after a stranger's baby on a train – only for the mother to vanish. When she looks in the baby’s things, she finds a note that says: ‘Please protect Mia. Don’t trust the police. Don’t trust anyone.’

THE CURFEW, coming March 2022, follows the events of a hot midsummer's night, when five teenagers go up to the woods to celebrate the end of exams, and only four come out...

Tim's thriller THE HOLIDAY was a Richard & Judy Book Club pick and spent ten weeks in the Sunday Times paperback top ten. It has since won a Nielsen Bestseller Award and been made into a four-part TV drama with Jill Halfpenny for Channel 5.

A former national newspaper journalist, Tim lives in Nottinghamshire with his family and writes in a cabin at the bottom of his garden.

4.2 out of 5 stars
4.2 out of 5
12,015 global ratings
How are ratings calculated?
To calculate the overall star rating and percentage breakdown by star, we don’t use a simple average. Instead, our system considers things like how recent a review is and if the reviewer bought the item on Amazon. It also analyses reviews to verify trustworthiness.

Wendy
5.0 out of 5 stars The Catch
Reviewed in Australia on 8 January 2022
Verified Purchase
This book deserves more then 5 🌟 stars. What a brilliant 👏 on the edge of your seat style. I honestly loved Ed, protective Father who wanted nothing but happiness for his Daughter Abby. Thank you for such a brilliant book. Looking forward to reading more from this Author.
Read more
Helpful
Report abuse

Elaine
5.0 out of 5 stars A must read!
Reviewed in Australia on 22 October 2020
Verified Purchase
The audible version was the most absorbing version of a book in my list. It was brilliantly frightening ..
Read more
One person found this helpful
Helpful
Report abuse

Mandy White
TOP 50 REVIEWER
4.0 out of 5 stars Who do you believe
Reviewed in Australia on 13 June 2020
Wow, The Catch does not hold back! Another fantastic read from TM Logan, I read this quickly, needling Tom see what was going to happen next. It is far from being predictable and has so many twists and turns you will feel like you are on a never ending roller coaster. You always know when you pick up a book from this author that you are in for a treat.

Abbie’s new boyfriend is a catch. Everybody thinks so.. except for her father Ed. Ryan is smart, has a great job, popular and good looking. But Ed thinks he is too good to be true. When they announce that they are getting married he become a obsessed in finding out the truth about his son in law to be. Some of the lengths that he goes to are insane and crazy.

You never quite know who to believe. Is Ed being over protective and paranoid? Is Ryan hiding something? You need to read this to believe it
Read more
3 people found this helpful
Helpful
Report abuse

Dudeloo
3.0 out of 5 stars Expected more
Reviewed in Australia on 19 December 2021
From the opening pages the reader knows there is something fishy going on here. This is a well crafted psychological thriller but somehow falls short of being a page turner. An average read.
Read more
Helpful
Report abuse

Elizabeth Moore
5.0 out of 5 stars Gripping
Reviewed in Australia on 11 January 2022
What a brilliant summer read. Believable characters, well structured tension and a gripping final sentence that shatters any thought you might have had of closure.
Read more
Helpful
Report abuse

lady_liz.
5.0 out of 5 stars Great page turner
Reviewed in Australia on 5 January 2022
Unexpected twists and turns. I'll be reading other books by this author! Enjoyable thriller with realistic characters. You won't be disappointed,
Read more
Helpful
Report abuse

SM
5.0 out of 5 stars Good read
Reviewed in Australia on 24 December 2021
I really enjoyed this book. Good characters, great story that kept me intrigued and guessing. Not knowing if the father was on the right track. Highly recommend.
Read more
Helpful
Report abuse
See all reviews

Sarah-Lou
5.0 out of 5 stars A great thriller
Reviewed in the United Kingdom on 6 June 2020
Verified Purchase
This is a fantastic thriller which makes you doubt yourself. Ed and Claire are shocked when their daughter, Abbie, brings home her new boyfriend for the first time and announces they are to be married in a matter of weeks. To all appearances, Ryan seems to be the perfect catch. Handsome, clever, ex military, university educated, with a good job. It doesn't take long for him to win over Claire and Abbie's grandmother, Joyce. Ed, however, has a 'bad feeling' about Ryan. Unable to persuade his daughter to have a long engagement, he has a matter of weeks to prove he is right. At points, you are right behind Ed, as Ryan definitely seems too good to be true. Then you start to feel sympathy for Ryan- he has done nothing wrong and is genuinely a nice guy. This tension continues throughout. It's a book which is so hard to put down and when you do step away, it makes you think about what you just read and whose side you fall on. The dynamics of a family are so well observed. A brilliant read.
Read more
121 people found this helpful
Report abuse

N M.
1.0 out of 5 stars The Catch (drop it)
Reviewed in the United Kingdom on 27 August 2020
Verified Purchase
Theres an acknowledgement at the end to a family member, thanking him for his great knowledge on how to successfully bury a body. T M Logan would have been better putting this advice to use and buried this idea on a dark moor before it went to print. Far fetched, annoying characters and a story which would have been better used as a Cagney & Lacey script.
Read more
68 people found this helpful
Report abuse

H. Wilkinson
5.0 out of 5 stars Another great thriller from Logan
Reviewed in the United Kingdom on 21 May 2020
Verified Purchase
After reading The Holiday last year I couldn’t wait to read the next book by Logan and I wasn’t disappointed!

This tells the story of Ed the father of Abbie who has just got engaged, however Ed doesn’t trust the new man in his daughters life and can’t put his finger on why...Or is he just being an over productive dad!

This is such an easy thriller to get in too! It’s written in the perspective mainly of The dad however the other three main characters also lead some episodes.

I read this within a few days and love it! Highly recommended!
Read more
59 people found this helpful
Report abuse

Shazbag
1.0 out of 5 stars Dreadful - don't waste your money on this!!
Reviewed in the United Kingdom on 22 June 2020
Verified Purchase
Dull, predictable, far fetched nonsense. The Holiday was mediocre on my opinion. I have no idea how this could be given 5 star reviews. Very poor
Read more
52 people found this helpful
Report abuse
See all reviews
Back to top
Get to Know Us
Make Money with Us
Let Us Help You
And don't forget:
© 1996-2022, Amazon.com, Inc. or its affiliates