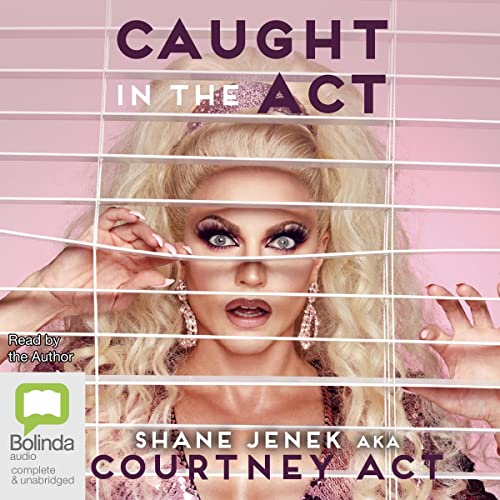 Caught in the Act: A Memoir by Courtney Act

Caught in the Act is about our journey towards understanding gender, sexuality and identity. It's an often hilarious and at times heartbreaking memoir from a beloved drag and entertainment icon.

Boy, girl, artist, advocate. Courtney is more than the sum of her parts.

Meet Shane Jenek. Raised in the Brisbane suburbs by loving parents, Shane realises from a young age that he's not like all the other boys. He finds his tribe at a performing arts agency, where he discovers his passion for song, dance and performance. Shane makes a promise to himself - to find a bigger stage.

Meet Courtney Act. Born in Sydney around the turn of the millennium, Courtney makes her name in the gay bars of Oxford Street and then on Australian Idol. Over 10 years later, she makes star turns on RuPaul's Drag Race and Celebrity Big Brother UK, bringing her unique take on drag and gender to the world.

Behind this rise to national and global fame is a story of searching for and finding one's self.

Switch between reading the Kindle book & listening to the Audible narration with Whispersync for Voice.
Get the Audible audiobook for the reduced price of $3.99 after you buy the Kindle book.
Learn more about membership
By completing your purchase, you agree to Audible’s Conditions Of Use and Privacy Notice.
Sold and delivered by Audible, an Amazon company
Share

4.4 out of 5 stars
4.4 out of 5
66 global ratings
How are ratings calculated?
To calculate the overall star rating and percentage breakdown by star, we don’t use a simple average. Instead, our system considers things like how recent a review is and if the reviewer bought the item on Amazon. It also analyses reviews to verify trustworthiness.

CJ Dee
5.0 out of 5 stars Heart, Soul and Spirit Gum
Reviewed in Australia on 5 November 2021
Verified Purchase
Caught in the Act is a raw and honest peek behind the curtain of beloved Australian entertainer Shane Jenek’s life told with his characteristic wit, charm and intelligence.

The reader is taken on a journey from suburban Brisbane through Shane’s childhood, to finding his tribe in Sydney, to the birth of one Courtney Act and beyond.

The story carefully woven throughout Shane’s life and memoir is one of self discovery. Whether exploring love and sexuality, gender identity, self-image or career goals, Shane tells the story of his life with an openness that is inspiring.

With laugh out loud moments that feature some familiar names popping up throughout, Shane’s tale never feels too heavy despite addressing some tough subjects.

It feels cliché to say that I couldn’t put it down but I genuinely spent every minute I could reading Caught in the Act. Even so far as to wait up until 1am when it was released on Kindle to download the pre-order and start reading. So it had pretty big purple and gold Louboutin sandal expectations to fill and exceeded every one.

If you love reading clever memoirs with heart, soul and spirit gum, then I highly recommend Caught in the Act.
Read more
Helpful
Report abuse

Amazon Customer
5.0 out of 5 stars An honest and insightful read
Reviewed in Australia on 28 November 2021
Verified Purchase
Shane/Courtney are a wonderful advocate for the LQBTQI+ community and their honest account of their life is brave and raw. The “Courtney Facts” provide easy to understand explanations of different terms within communities and the meanings behind why they are so important today.
Read more
Helpful
Report abuse

Justine
5.0 out of 5 stars Open up a whole new way of thinking
Reviewed in Australia on 2 December 2021
Verified Purchase
I loved the way I was shown to twist and turn my mind. To understand the differences in people and view gender entirely different and being fluid. Beautifully and basically explained. I think everyone should read this.
Read more
Helpful
Report abuse

Bigfeet91
5.0 out of 5 stars Absolutely fantastic!
Reviewed in Australia on 29 November 2021
Verified Purchase
A great eye opening and educating read! A wonderful insight to the mind and inner workings of a very interesting person and performer!
Read more
Helpful
Report abuse

Dicko
5.0 out of 5 stars Bought as a gift
Reviewed in Australia on 16 January 2022
Verified Purchase
Bought this a Xmas gift for my Mum & she loved it!
Read more
Helpful
Report abuse
See all reviews
Back to top
Get to Know Us
Make Money with Us
Let Us Help You
And don't forget:
© 1996-2022, Amazon.com, Inc. or its affiliates