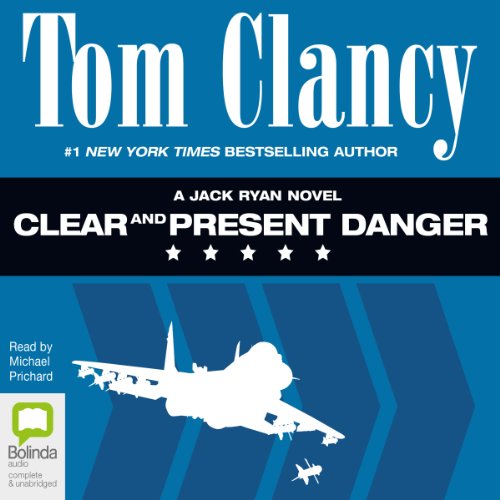 At what point does criminal activity threaten national security? When can a nation respond to it as to an enemy? These are the questions Jack Ryan must consider when he hears the awful news: Colombian drug lords, tired of being harassed by US law enforcement agents, have assassinated three high American officials, and that is just the beginning. The message is clear: Leave us alone. But they have pushed too far. Someone steps quietly over the line they have drawn, deploying covert-action teams in Colombia, intending to take the fight to the enemy. But does anyone know who the real enemy is? And how much action is too much? Who is doing what? Which line has been crossed? Ryan and his "dark side" counterpart, a shadowy field officer known only as Mr. Clark, must find out. They expect danger from without - but the danger from within may be the greatest of all.

4.6 out of 5 stars
4.6 out of 5
1,273 global ratings
How are ratings calculated?
To calculate the overall star rating and percentage breakdown by star, we don’t use a simple average. Instead, our system considers things like how recent a review is and if the reviewer bought the item on Amazon. It also analyses reviews to verify trustworthiness.

Old Grim's Reviews
TOP 50 REVIEWER
5.0 out of 5 stars The best selling book of the 80s is a must read!!
Reviewed in Australia on 4 June 2019
Clancy goes from strength to strength as a writer in a Clear and Present Danger. Jack Ryan finds himself out of the loop as the CIA is undergoing coverts ups on the drug cartels in Colombia. A political thriller mixed with Clancy's rapid pace of the techno thriller is one bloody good book.
Read more
Helpful
Report abuse
See all reviews

Carrick
5.0 out of 5 stars Clancy at his very best
Reviewed in the United Kingdom on 18 August 2019
Verified Purchase
I read this when it first came out and it was very topical. It has aged well; better than most other of Clancy's work. Not easy to make a film from it, there's so much going on, but Harrison Ford made a good effort. If you only read one Clancy book, and I've read them all, this'd be my choice.

The title comes from a legal definition that allows a POTUS to take unilateral action without oversight. Defining the drug barons as 'A clear and present danger'. lets USA take strong direct action, then reale-politik takes a hand! A mix of spy-police-tech-fight-politics and a rich cast of characters bound together on a fast paced ride with Clancy's trade mark depth and realism. The acceleration is the second half (also trade mark) is adrenaline pumping.

BookWorm1
5.0 out of 5 stars A brilliant book, unputdownable.
Reviewed in the United Kingdom on 3 March 2012
Verified Purchase
Tom Clancy does it again. The US President initiates a personal vendetta against the Columbian Medelin Drug Cartel. Saying they constitute a "Clear and Present Danger" to the security of the USA. Using the CIA and military forces the President authorises a covert action against the Drug Barons during an Election Year. Only to find that the operation is compromised and has to be shut down, with devastating circumstances. Enter Jack Ryan, who as acting DDI due to Admiral Greers sickness, and has no knowledge of the operation taking place, has to sort out the mess.

If there is one Tom Cancy novel you must read, it's this one. A lot better than the film version!
Read more
3 people found this helpful
Report abuse

MR PATRICK B HIGGINS
5.0 out of 5 stars Great!
Reviewed in the United Kingdom on 11 February 2019
Verified Purchase
Book as described, thank you.
Read more
Report abuse
See all reviews