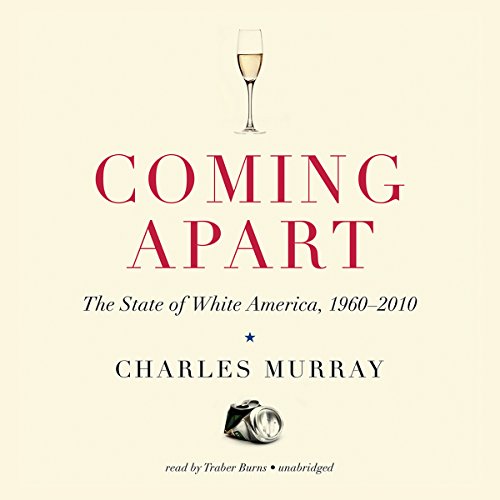 From the best-selling author of Losing Ground and The Bell Curve, this startling long-lens view shows how America is coming apart at the seams that have historically joined our social classes.

In Coming Apart, Charles Murray explores the formation of American classes that are different in kind from anything we have ever known, focusing on whites as a way of driving home the fact that the trends he describes do not break along lines of race or ethnicity.

Drawing on five decades of statistics and research, Coming Apart demonstrates that a new upper class and a new lower class have diverged so far in core behaviors and values that they barely recognize their underlying American kinship—a divergence that has nothing to do with income inequality and that has grown during good economic times and bad.

The top and bottom of white America increasingly live in different cultures, Murray argues, with the powerful upper class living in enclaves surrounded by their own kind, ignorant about life in mainstream America, and the lower class suffering from erosions of family and community life that strike at the heart of the pursuit of happiness. This divergence puts the success of the American project at risk.

The evidence in Coming Apart is about white America. Its message is about all of America.

Charles Murray is the W. H. Brady Scholar at the American Enterprise Institute. He first came to national attention in 1984 with Losing Ground. He received a bachelor’s degree in history from Harvard and a Ph.D. in political science from the Massachusetts Institute of Technology. He lives with his wife in Burkittsville, Maryland.

4.5 out of 5 stars
4.5 out of 5
816 global ratings
How are ratings calculated?
To calculate the overall star rating and percentage breakdown by star, we don’t use a simple average. Instead, our system considers things like how recent a review is and if the reviewer bought the item on Amazon. It also analyses reviews to verify trustworthiness.

Mr White
4.0 out of 5 stars Coherent answer to difficult question.
Reviewed in Australia on 29 April 2015
Verified Purchase
Fantastic collation of the deterioration of the lower tier of society. Wonderfully clear interpretations of data that provide a behavioural basis of the ever-widening gap between rich and poor. Some of the analysis utilise rather arbitrary cut-off points to illustrate cases and I suspect some of the data has been handled to fit the narrative. However, the book manages to synthesise vast amounts of information to form a coherent answer to an otherwise nebulous problem. This is one of the few books that challenge my thinking and change my point of view.
Read more
Helpful
Report abuse

Chris X
5.0 out of 5 stars Very interesting study
Reviewed in the United Kingdom on 18 November 2020
Verified Purchase
Well worth a read
Read more
One person found this helpful
Report abuse

Alexander H
5.0 out of 5 stars Very timely book, should be top of the reading list for every public servant
Reviewed in the United Kingdom on 9 August 2016
Verified Purchase
Excellent work. His central arguments are equally applicable here in the UK; see Brexit. Could have done with some demographic stats to give more weight to his observations on Europe.
Read more
One person found this helpful
Report abuse