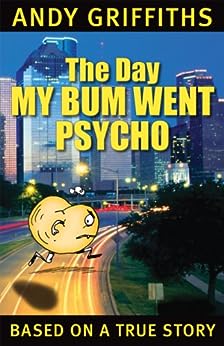 The delightfully silly series that inspired the television animation.

'This is my story.

Not even the names have been changed.

Like most people I took my bum for granted. I agreed to tell my story in the hope that others could learn from it. If this book can save even just one person from making the same mistake, then I will be happy.
Who knows?

Zack Freeman is ready to tell his story. The story of a boy, his runaway bum and some of the most dangerous bums in the world including kamikaze bums; nuclear bums; and Stenchgantor, the Great Unwiped Bum. With the help of The B-team (a crack bum-fighting unit comprising three of the best bum-fighters in the business: the Kicker, the Smacker and the Kisser), Zack will risk methane madness crossing the Great Windy Desert, death by stink-bog in the Brown Forest, and the perils of the Sea of Bums before finally descending into the heart of an explosive bumcano to confront the most psycho bum of them all-His own!

A story that you and your bum will never forget. --This text refers to the audioCD edition.

Andy Griffiths is one of Australia's most popular children's authors. He and illustrator Terry Denton have collaborated on more than 30 bestselling books since their first title, Just Tricking, was published in 1997.

In Australia Andy and Terry's books have sold over 10 million copies, won 80 children's choice awards and 10 Australian Book Industry Awards-including Book of the Year for The 52-Storey Treehouse in 2015.

Their much-loved Treehouse Series has been embraced by children around the world and is now published in more than 35 countries. Five of the books in the series have been adapted for the stage and have all had sell-out seasons at the Sydney Opera house, as well as highly successful seasons in the Netherlands, New Zealand and America.

Andy is a passionate advocate for literacy and in 2015 was awarded the Dromkeen Medal to honour his outstanding contribution to Australian children's literature. He is also an ambassador for both The Indigenous Literacy Foundation and the Pyjama Foundation.

Terry Denton is a writer and illustrator based in Melbourne, Australia. His work is mainly humour-based cartoon style.


Terry Denton has illustrated bestsellers such as the JUST! series and the Treehouse series by Andy Griffiths. He has three children and is the owner of a back garden burial ground for dead pets.

Andy Griffiths is Terry's best mate. He is also Australia's number-one children's author. His books, including the popular Treehouse series, have been hugely successful internationally, winning awards and becoming bestsellers in the UK and the USA as well as in his homeland, Australia. Andy thrives on having an audience: he has worked as a high-school teacher, been the lead singer in a rock band and a stand-up comedian. He is a passionate advocate for literacy, has two daughters and lives in Melbourne, Australia.

4.5 out of 5 stars
4.5 out of 5
43 global ratings
How are ratings calculated?
To calculate the overall star rating and percentage breakdown by star, we don’t use a simple average. Instead, our system considers things like how recent a review is and if the reviewer bought the item on Amazon. It also analyses reviews to verify trustworthiness.

Alex
5.0 out of 5 stars A scatological classic!
Reviewed in Australia on 21 January 2015
Verified Purchase
Great for those of you that are a 12 year old... or a 12 year old at heart. A lightweight read for the jetlagged passenger.
Read more
Helpful
Report abuse

Isabelle Fisher
5.0 out of 5 stars Cool
Reviewed in Australia on 3 January 2015
Verified Purchase
This was funny great and so amazing it makes me laugh so hard I have a sore throat but it is worth what a great book
Read more
Helpful
Report abuse
See all reviews

SV
5.0 out of 5 stars Five Stars
Reviewed in the United Kingdom on 9 May 2015
Verified Purchase
Son loved the book and the seller delivered it very quickly.
Read more
Report abuse

Lisa
1.0 out of 5 stars A gross-out book which is far too gross - do not buy!
Reviewed in the United Kingdom on 30 December 2011
Verified Purchase
I expected this to be the usual irreverent toilet humour book which my boys (11 and 8) would enjoy as a bed time story book. I was wrong. The main problem is that this book is far TOO disgusting, and also weird and troubling. One character is eaten alive by giant maggots swimming in a lake of excrement. In another scene, our heroes launch themselves in the air by climbing onto a giant spot on a buttock, squeezing the spot, then riding the flying pus. One man is rearranged so that his face is on his bum and his bum is on his head, so he has to poo through his own mouth. These are just the "highlights" and there are many more. One character called "The Kisser" hypnotises the wild bums by kissing them until they fall in to a trance. That's just weird.

The other problem here is that the story makes absolutely NO sense. I can handle the idea that your bum can detach and run around by itself, but giant bums, swimming shark bums?? Where did they come from?? They didn't detach off anybody. And bums can fly by fart power, with enough force to carry a human, but humans can't fly when their real bums are attached - that's just bad physics. The story rambles endlessly, and just seems to peter out at the end. There are no "laugh out loud" moments to make this book worth reading.

Having to read this story to my children, I was constantly editing as I read, sometimes skipping whole paragraphs which were too disgusting or weird. I also had to constantly translate from American to English words, as the book was originally American, and they just changed "butt" to "bum" but left all the other American words unchanged.

My children and I decided to finish the book, but we were all relieved when it was over and we could move onto another book. I threw the book in the bin, as it is not even good enough to go the the charity shop.

Felicity
5.0 out of 5 stars great fun
Reviewed in the United States on 7 February 2013
Verified Purchase
one of my daughters is a stickler for rules and correctness. having mummy read this with her helped her relax heaps.
Read more
Report abuse

max
5.0 out of 5 stars the day my bum went psyco
Reviewed in the United States on 6 February 2014
Verified Purchase
This book is amazing
I loved it
Probably the best book by Andy Grifiths
Going to read it again seriosly
Read more
Report abuse
See all reviews
Report an issue
Does this item contain inappropriate content?
Report
Do you believe that this item violates a copyright?
Report
Does this item contain quality or formatting issues?
Report