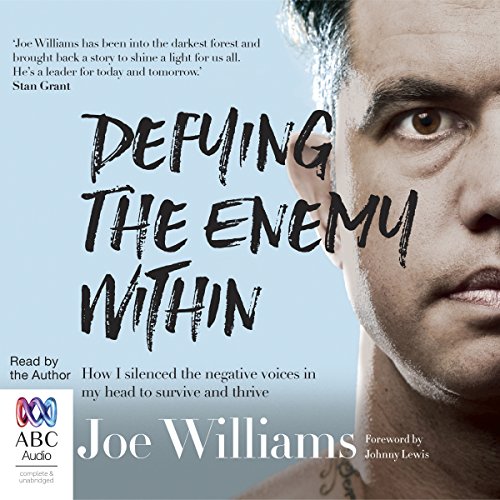 Defying the Enemy Within: How I Silenced the Negative Voices in My Head to Survive and Thrive

Former professional sportsman Joe Williams shares his struggles with mental illness and reveals what has helped him survive and thrive.

Former NRL player, world boxing title holder and proud Wiradjuri First Nations man Joe Williams was always plagued by negative dialogue in his head, and the pressures of elite sport took their toll. Joe eventually turned to drugs and alcohol to silence the dialogue before attempting to take his own life in 2012.

In the aftermath, determined to rebuild, Joe took up professional boxing and got clean. Defying the Enemy Within is both Joe's story and the steps he took to get well. Williams tells of his struggles with mental illness, later diagnosed as bipolar disorder, and the constant dialogue in his head telling him he's worthless and should die. In addition to sharing his experiences, Joe shares his wellness plan - the ordinary steps that helped him achieve the extraordinary.

Switch between reading the Kindle book & listening to the Audible narration with Whispersync for Voice.
Get the Audible audiobook for the reduced price of $4.99 after you buy the Kindle book.
Final days - Don't miss out!
Learn more about membership
By completing your purchase, you agree to Audible’s Conditions Of Use and Privacy Notice.
Sold and delivered by Audible, an Amazon company

4.4 out of 5 stars
4.4 out of 5
11 global ratings
How are ratings calculated?
To calculate the overall star rating and percentage breakdown by star, we don’t use a simple average. Instead, our system considers things like how recent a review is and if the reviewer bought the item on Amazon. It also analyses reviews to verify trustworthiness.

Jim KABLE
TOP 500 REVIEWER
5.0 out of 5 stars Finding Inner Strength - Culture, Mentors and Pathways
Reviewed in Australia on 17 September 2018
Verified Purchase
This is a remarkable book by a remarkable Wiradjuri man - a champion footballer, boxer and citizen. He tells his own story - fighting the demons of the negative voices - and then lays out how others may protect themselves from the negative impulses. Bravo, Joe - you are an inspiration - to your children, your partner, your family - and to many others who feel themselves lost. This is a book which shares and never flinches from uncomfortable truths - it is that truth which has set Joe free and will do likewise for those who need a mentor and the way for them to follow.
Read more
Helpful
Report abuse

Leticia
5.0 out of 5 stars Great read
Reviewed in Australia on 6 March 2018
Verified Purchase
Great read, well written, easy read, with a important message and many inspirational words of advice. Great work Joe and thanks for sharing your story.
Read more
Helpful
Report abuse

kathleen a. myre
5.0 out of 5 stars Inspiring Story on Physical & Mental Wellness
Reviewed in the United States on 7 July 2018
Verified Purchase
I liked that Joe Williams’s book is broken down into two parts. In Part 1, My Story, Joe talks about his life as a young boy and the man he is today. In Part 2, Defying the Enemy Within, Joe provides examples of the coping skills he uses to manage Bipolar Disorder on a daily basis.

I would recommend this book to everyone because the only way to move away from the stigma of mental illness is for the population at large to become more informed.
Read more
2 people found this helpful
Report abuse
See all reviews