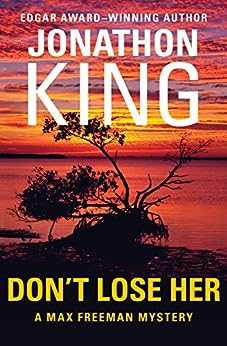 by Jonathon King (Author) Format: Kindle Edition
Book 7 of 7: The Max Freeman Mysteries
See all formats and editions
Sorry, there was a problem loading this page. Try again.
When a pregnant judge is abducted, a PI follows her trail into the Florida Everglades in this novel by “the master of the high-stakes thriller” (Michael Connelly).

US district judge Diane Manchester has looked across the courtroom into the eyes of evil before. But today, as she presides over the extradition hearing of a notorious Colombian drug lord, she is also eight months pregnant. Her chair is uncomfortable, her robe is constrictive, and her due date is fast approaching. If she shows a single sign of weakness, Diane risks jeopardizing the biggest trial of her career and setting a vicious murderer free.

In seconds, her situation takes a harrowing turn for the worse. Walking to her favorite lunch spot, Diane is grabbed off the street, thrown into the back of a white van, blindfolded, and threatened with death. She has no idea who her kidnappers are or what they want. Maintaining a strict code of silence, they refuse to give her even the smallest glimmer of hope.

But Diane’s captors have overlooked a crucial detail: Her husband, Billy, is the employer and best friend of Max Freeman, Philadelphia cop turned South Florida private investigator. Tossing off the rule of law, Freeman sets out to determine which of a rogues’ gallery of suspects took Diane—and to save her and her unborn child before it’s too late.

From the author of the Edgar Award winner The Blue Edge of Midnight, whose “descriptions of Florida’s backwaters put him right up there with James W. Hall and Randy Wayne White” (Chicago Tribune), this is a mystery with “the kind of clock-driven suspense seen in the best of Harlan Coben” (Booklist).

"Edgar-winning King's seventh Max Freeman mystery has the kind of clock-driven suspense seen in the best of Harlan Coben. . . . This is a strong series, and [Don't Lose Her] will appeal directly to fans of adrenaline-driven suspense fiction." --Booklist

"It's great to have Max Freeman back! In Don't Lose Her, Jonathon King proves once again that he is the master of the high-stakes thriller. This book moves with relentless abandon. And why not? When you've got Max on the case, you don't wait for back up!" --Michael Connelly

"King has long been on my must-read list, and the latest Max Freeman mystery, Don't Lose Her, is absolutely first-rate. Its opening is utterly gripping, and the story only picks up narrative steam and emotional richness as the pages fly by. Add to that a colorful cast of characters, settings rendered with delicacy and lyricism, and a conclusion that's as potent as it is satisfying. It's been a long time since I read a novel that stayed with me with such hypnotic power." --James W. Hall

"Jonathon King captures the intrigue, lyrical beauty, and darkness of the Florida Everglades better than any other writer I know of." --James Lee Burke

Jonathon King is an Edgar Award–winning mystery novelist and the creator of the bestselling Max Freeman crime series. Born in Lansing, Michigan, in the 1950s, King worked as a crime reporter in Philadelphia and Fort Lauderdale for twenty-four years before becoming a full-time novelist. Along with the seven books of the Max Freeman series, King has authored the thriller Eye of Vengeance (2007) and the historical novel The Styx (2009).

4.3 out of 5 stars
4.3 out of 5
130 global ratings
How are ratings calculated?
To calculate the overall star rating and percentage breakdown by star, we don’t use a simple average. Instead, our system considers things like how recent a review is and if the reviewer bought the item on Amazon. It also analyses reviews to verify trustworthiness.

There are 0 reviews and 9 ratings from Australia

Robin N Campbell
2.0 out of 5 stars Disappointing
Reviewed in the United Kingdom on 9 March 2017
Verified Purchase
Mr King can write a good book, but this is a lemon. After a little flurry of excitement at the beginning absolutely nothing happens until a few pages at the end. There is a particularly irritating character with a stutter and every stutter is carefully replicated in all his invariably tedious direct speech. No plot worth the name here.
Read more
Report abuse

David A. Freas
4.0 out of 5 stars I like this series.
Reviewed in the United States on 6 May 2016
Verified Purchase
This series is one of my favorites. This newest entry did nothing to change that.

King brings the Everglades alive, making the reader feel as if he’s there, in a few well-crafted sentences. And he moves Max’s relationship with Sherry forward a few steps, a much more realistic approach than many authors use.

The tension is steady throughout with just enough downtime sections to give the reader a chance to catch his breath.

The reason for kidnapping Max’s friend’s wife, Diane, was a bit of a surprise but I suspected who was behind it the moment he appeared in the book.

The first four chapters are in present tense, the rest in past. When King made the shift from present tense in Chapter 5, it threw me.

Two key characters in the story seem to get short shrift at the end, disappearing after the climax. It would have been nice to know what happened to them. The epilog seemed a little vague and thus unnecessary – unless King is using it as a lead-in to an upcoming book in the series.

One mistake jumped out at me. King has Freeman driving a restored one-time Plymouth police car with a 420 cu. in. engine. Those cars had 440 cu. in. engines.

I still like these Max Freeman novels and hope King writes more of them.
Read more
Report abuse

Mac Blair
3.0 out of 5 stars Some very good pages, a lot of slow reading.
Reviewed in the United States on 27 October 2015
Verified Purchase
I enjoy reading Max Freeman books but his one is more about Diane Manchester than Max. True he is involved in helping to find her, alone with Billy, her husband, but the man character through out the book is Diane. Others have written many lines telling what the book is about so no need for me to do that. There are some twist and turns at the end. The rest is pretty well cut and dried as you know how it is going to turn out. I did like the way the conversation had to be done between Max and CQ. That was good. Am sure I will get the next Max Freeman when it comes out but hope it provides a little more of him and more action that this one.
Read more
Report abuse

Sara S
4.0 out of 5 stars Max Freeman always a fun read
Reviewed in the United States on 30 May 2019
Verified Purchase
As with the 6 previous Max Fredman novels, I thoroughly enjoyed this story. Jon King does a splendid job in fleshing out his characters and making the reader actually care about what happens to them in both this novel and in the future. You won't be disappointed with this or any other Max Freeman novel. I an looking forward to Jon King's next Max Freeman novel!
Read more
Report abuse

Amazon Customer
5.0 out of 5 stars An Excellent Book!
Reviewed in the United States on 14 September 2020
Verified Purchase
The story line is believable (if somewhat unlikely) and it ends well. I hate books that don't end well.
Read more
Report abuse
See all reviews
Report an issue
Does this item contain inappropriate content?
Report
Do you believe that this item violates a copyright?
Report
Does this item contain quality or formatting issues?
Report