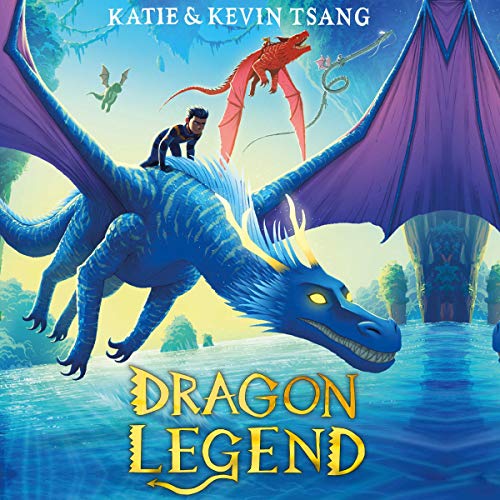 The second adventure in the roar-some Dragon Realm series for listeners aged nine and above! Perfect for those looking for edge-of-your-seat adventure. Dragon Rising, the fourth instalment, is now available to pre-order.

Billy Chan and his friends are not having a very relaxing summer. Their friend Dylan has been kidnapped by the evil Dragon of Death, and it’s up to them to travel through time, back to the dangerous Dragon Realm in order to save him. Luckily they have their own dragons on side, but they’ll need to collect eight magical pearls if they’re to amass enough power to destroy the Dragon of Death and her followers for good. So begins an epic quest that will take them to the depths of the Frozen Wasteland and the imperial palaces of Ancient China. But can good triumph evil?

Switch between reading the Kindle book & listening to the Audible narration with Whispersync for Voice.
Get the Audible audiobook for the reduced price of $15.19 after you buy the Kindle book.
Learn more about membership
By completing your purchase, you agree to Audible’s Conditions Of Use and Privacy Notice.
Sold and delivered by Audible, an Amazon company

4.7 out of 5 stars
4.7 out of 5
492 global ratings
How are ratings calculated?
To calculate the overall star rating and percentage breakdown by star, we don’t use a simple average. Instead, our system considers things like how recent a review is and if the reviewer bought the item on Amazon. It also analyses reviews to verify trustworthiness.

shannen
5.0 out of 5 stars Got it for my niece
Reviewed in Australia on 8 July 2022
Verified Purchase
Niece liked it
Read more
Helpful
Report abuse

Hilal
5.0 out of 5 stars If you are a fan of Wings of fire books, this book is just for you!
Reviewed in the United Kingdom on 20 July 2021
Verified Purchase
My 10 year old daughter is totaly in love with these series. She read the first and the second book now she asks me to buy the 3rd one :) she finished reading the Wings of Fire books and is totally into these.
Read more
One person found this helpful
Report abuse

Wooziesusie
5.0 out of 5 stars 8 year old Happy!
Reviewed in the United Kingdom on 4 July 2021
Verified Purchase
My 8 Yr old son is an avid reader, he really enjoyed the 1st in this series, counted down until this was released, and is on the countdown to the next!
Read more
One person found this helpful
Report abuse

Katie
5.0 out of 5 stars Great book
Reviewed in the United Kingdom on 27 June 2021
Verified Purchase
there are two books in the series and my 10 year old daughter thoroughly enjoyed both and is hoping there will be a third book.
Read more
One person found this helpful
Report abuse

CMickell
4.0 out of 5 stars Ideal for 7 and over
Reviewed in the United Kingdom on 11 September 2021
Verified Purchase
The book didn’t appeal to me - but then it’s not aimed at over 60s! But my grandson (almost 8) loved it and is now hooked on the series. It certainly helped push his reading age along.
Read more
Report abuse

Granny
5.0 out of 5 stars Best childrens books I have read
Reviewed in the United Kingdom on 4 November 2021
Verified Purchase
Read these 3 dragon books to my grandson age 6. He loved them almost as much as I did! Really well written and strong characters and story line. Thoroughly recommend
Read more
Report abuse
See all reviews