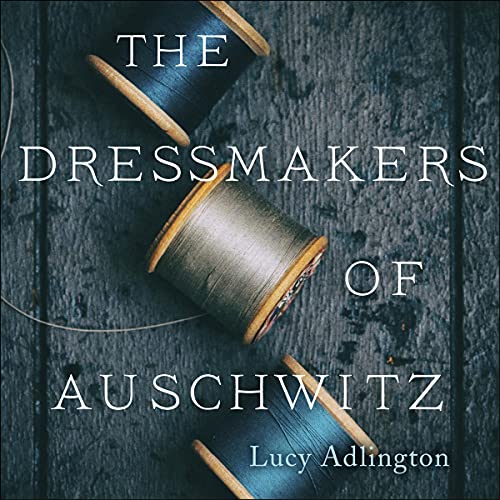 The Dressmakers of Auschwitz: The True Story of the Women Who Sewed to Survive

Lucy Adlington (Author, Narrator), Hodder & Stoughton (Publisher)
4.5 out of 5 stars 1,181 ratings
See all formats and editions
Sorry, there was a problem loading this page. Try again.

The powerful chronicle of the women who used their sewing skills to survive the Holocaust, stitching beautiful clothes at an extraordinary fashion workshop created within one of the most notorious WWII death camps.

At the height of the Holocaust, 25 young inmates of the infamous Auschwitz-Birkenau concentration camp - mainly Jewish women and girls - were selected to design, cut and sew beautiful fashions for elite Nazi women in a dedicated salon. It was work that they hoped would spare them from the gas chambers.

This fashion workshop - called the Upper Tailoring Studio - was established by Hedwig Höss, the camp commandant's wife, and patronised by the wives of SS guards and officers. Here, the dressmakers produced high-quality garments for SS social functions in Auschwitz, and for ladies from Nazi Berlin's upper crust.

Drawing on diverse sources - including interviews with the last surviving seamstress - The Dressmakers of Auschwitz follows the fates of these brave women. Their bonds of family and friendship not only helped them endure persecution but also to play their part in camp resistance. Weaving the dressmakers' remarkable experiences within the context of Nazi policies for plunder and exploitation, historian Lucy Adlington exposes the greed, cruelty and hypocrisy of the Third Reich and offers a fresh look at a little-known chapter of World War II and the Holocaust.

4.5 out of 5 stars
4.5 out of 5
1,181 global ratings
How are ratings calculated?
To calculate the overall star rating and percentage breakdown by star, we don’t use a simple average. Instead, our system considers things like how recent a review is and if the reviewer bought the item on Amazon. It also analyses reviews to verify trustworthiness.

Darryl Greer
3.0 out of 5 stars A DIFFERENT ANGLE ON THE HORRORS OF AUSCHWITZ
Reviewed in Australia on 8 November 2021
Stories about the Holocaust in general, Auschwitz in particular need to be told, re-told and told again, lest we forget. Lucy Adlington’s "The Dressmakers of Auschwitz" is another in this ilk, though told from a slightly different angle. It features the seamstresses who were co-opted for the Nazi war effort, as well as being forced to design and make clothes for the wives of Nazi hierarchy in the camp. No-one needs to be reminded of the horrors of Auschwitz but there are plenty of examples in this book of the extent of the barbarity inflicted on these women by the Nazis. In her pursuit of truth and accuracy, the author has undertaken an incredible amount of research and has conducted in-depth interviews of Holocaust survivors. Ironically, that is the book’s downfall. It is filled to the brim with research material, it is far too long, the scenes at Auschwitz only take up a small percentage of the book and at times, despite the nightmare these women and their fellow inmates suffered, it gets a little tedious. For those interested in the plight of these women, the dressmaking angle or just wanting to read something about Auschwitz told a little differently, "The Dressmakers of Auschwitz" is worth a read. Otherwise, there are many other non-fiction stories that are more engaging, including "Auschwitz Lullaby" by Mario Escobar and "The Choice" by Dr. Edith Eger. "Karolina’s Twins" by Ronald H. Balson is a work of fiction but it is based on actual stories extensively researched by the author.
Read more
One person found this helpful
Helpful
Report abuse
See all reviews

marlinspike
5.0 out of 5 stars A story that had to be told, a very readable and moving account of survival and friendship
Reviewed in the United Kingdom on 25 October 2021
Verified Purchase
I have read all of Lucy's books but this one was rather different. Her account of the women who worked in Auschwitz's "Upper Tailoring Studio", sewing as if their lives depended upon it - as it truly did - is moving and awe-inspiring. Although it is a very well-researched non-fiction account it is written in a very accessible and readable style. The author does not shy away from describing the gruesome conditions and almost unimaginable torments of life in the death camps but throughout the story the beacon of courage and survival burns bright. A very worthwhile book which adds an important contribution to accounts of the Holocaust for both those who survived and the families of those who did not.
Read more
2 people found this helpful
Report abuse

EWardle
5.0 out of 5 stars Incredible!
Reviewed in the United Kingdom on 27 February 2022
Verified Purchase
Incredible! The resilience of these women was astounding and humbling. I did enjoy reading the last 2 paragraphs of page 277.. I only had basic knowledge of what happened to Jews, this is a real education
Read more
Report abuse

mjhtog
5.0 out of 5 stars Harrowing but a great read
Reviewed in the United Kingdom on 21 April 2022
Verified Purchase
This is a very harrowing story of resilience and self preservation in the most unimaginable circumstances.
Read more
Report abuse

mmariah
5.0 out of 5 stars Not What I expected, BUT ...
Reviewed in Canada on 26 March 2022
Verified Purchase
When I purchased this book, I was expecting a "story" but got quite a shocking surprise to discover it was not only to remind us of the horrors of the Holocaust, but a history lesson we would never find in a classroom, or a texxt book.

A story of unknown strengths, endurance, resiliance, lifelong friendship, loyalty, unbelievable hardships and the power of positivity. Yes, many more characters than a normal book would introduce, and often could not keep track of them, but in the big scheme of lhings, just as in our own lives, everything is inter-twined, and each person impacted the lives of the Dressmakers in one way or another.

A huge thank you to Dr Lore Shelley for realizing that the experiences and memories of these survivors needed to be documented and shared, and by starting the daunting task of contacting this women (and men) and gathering the information. And another big thanks to the author Lucy Addington for all the work and time she invested in completing the project - chronicling the submissions and all of the research and follow up with several of the main characters.

Among other things, it serves to remind us that we are so lucky to live in the world we live in today.
Read more
Report abuse

gail milling
5.0 out of 5 stars Amazing book
Reviewed in Canada on 7 October 2021
Verified Purchase
I found the book to be insightful and interesting read as I learn more about this difficult time in human history and the will to survive through this shameful part of the 20 th century
Read more
One person found this helpful
Report abuse
See all reviews