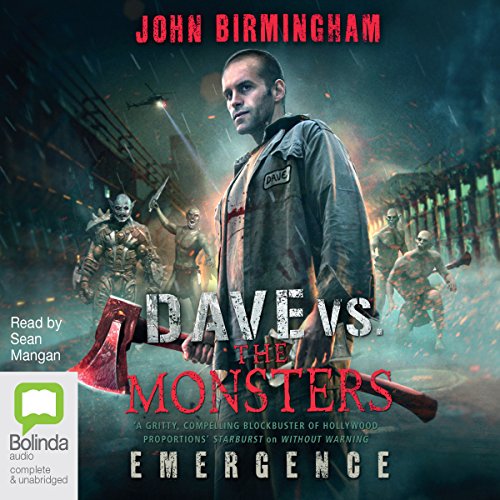 "Monsters" said Vince Martinelli. "There are monsters on the rig, Dave."

Dave Hooper has the hangover from hell, a demonic ex-wife and the claws of the tax office sinking into him. So the last thing he needs is an explosion at the off-shore oil rig where he works.

But this is no ordinary industrial accident, and despite the news reports, Dave knows that terrorists aren't to blame for the disaster. He knows because he has killed one of the things responsible.

When he wakes up in a hospital bed guarded by Navy SEALs, he realises he hasn't been on a bad acid trip. It all really happened. Yet his shock is cut short by a startling self-discovery; his contact with the creature has transformed the overweight, balding safety manager into something else entirely. A goddamned superhero. Then he learns the attack on the rig is only the first.

Switch between reading the Kindle book & listening to the Audible narration with Whispersync for Voice.
Get the Audible audiobook for the reduced price of $49.17 after you buy the Kindle book.
Learn more about membership
By completing your purchase, you agree to Audible’s Conditions Of Use and Privacy Notice.
Sold and delivered by Audible, an Amazon company

4.2 out of 5 stars
4.2 out of 5
19 global ratings
How are ratings calculated?
To calculate the overall star rating and percentage breakdown by star, we don’t use a simple average. Instead, our system considers things like how recent a review is and if the reviewer bought the item on Amazon. It also analyses reviews to verify trustworthiness.

Kindle Customer
2.0 out of 5 stars Drown in the testosterone.
Reviewed in the United Kingdom on 22 July 2016
Verified Purchase
Guns, god, ghouls, candy bars and neo-con ideology. I was unable to finish this book and gave up about three quarters of the way through. Dave appears to be the uber-macho embodiment of a Reaganite redneck, hard-drinking, hard -screwing, liberal-hating, gun-toting moron. As a story to appeal to those who think Sarah Palin an intellectual heavyweight it hits all the required lows, extolling the virtues of a capitalist mentality while advertising numerous candy bars.
It starts out as slightly humorous parody, tainted with the usual redneck asides regarding Greenpeace, Toyotas and vegans but then gets bogged down in Norse legends and supernaturalism as if the author half remembered some H P Lovecraft from his childhood. The names of the demons are simplistic as if the author could not be bothered to tax his limited imagination further.
Not a series I shall be following.
Read more
3 people found this helpful
Report abuse

T.FM
5.0 out of 5 stars Guilty Pleasure
Reviewed in the United Kingdom on 5 November 2016
Verified Purchase
I can't even remember buying this book, and its certainly not something I would normally have picked up. If I was trying to put a tag on this book - It would go along the lines of - If you took a team of screen writers from Doctor Who (not the new stuff - the John Pertwee era in the '70s), and some '80s action movies (more Nicholas Cage than Arnie), then stuck them in a locked room you would end up with a character like Dave Hooper in a scenario like "Dave vs. the Monsters".
It has the makings of a complete train wreck but John Birmingham writes really, really well and totally pulls it off. It would be easy to look at the title and the cover and write this off as pulp, but its not. The writing is good, the plot is engaging, and having started reading almost by accident, the sequel is next on my list of purchases.
Read more
2 people found this helpful
Report abuse

Nick Brett
3.0 out of 5 stars Here be monsters
Reviewed in the United Kingdom on 20 May 2015
Verified Purchase
An oil rig goes deeper than ever before and unleashes a horde of orc like monsters into our world. A hung-over and overweight middle aged safety worker manages to kill one and becomes transformed into a super strength monster killer.

John Birmingham has written some great books, the After America trilogy was exceptional, clever and exciting. His books to date have been alternative futures but very well written and exploring some surprisingly in-depth themes. This one is different and it feels like the author has decided to be less serious and just have fun. His lead character is a bit of an unlikable oaf and even by the end of the book we are still not sure if we actually have warmed to him. I can see that part of the story is his transformation but it doesn't really kick in during this book. The depth and thought we have seen in his previous novels is not overly present here, in a fairly straight story of unleashed monsters, the battles with humans and the introduction of Super-Dave and his newly found abilities and appetite.

It's okay but I did feel it lacked something to lift it above other books that are similar to this. It just felt it was a little simplistic and linear and actually needed the intelligence that normally John Birmingham puts into his books.
Read more
One person found this helpful
Report abuse

james manning
5.0 out of 5 stars John Birmingham
Reviewed in the United Kingdom on 2 May 2021
Verified Purchase
Dad liked them
Read more
Report abuse

S J Richardson
5.0 out of 5 stars Worth the wait
Reviewed in the United Kingdom on 5 May 2015
Verified Purchase
It's been a long time coming after the books release last year in Australia. But John Birmingham has created a book that moves at break neck pace filled with a anti-hero and a wholly believable underworld (literally)

The only downside is waiting for book two to continue Dave smashing skulls and moor plosions of an epic scale.
Read more
Report abuse
See all reviews