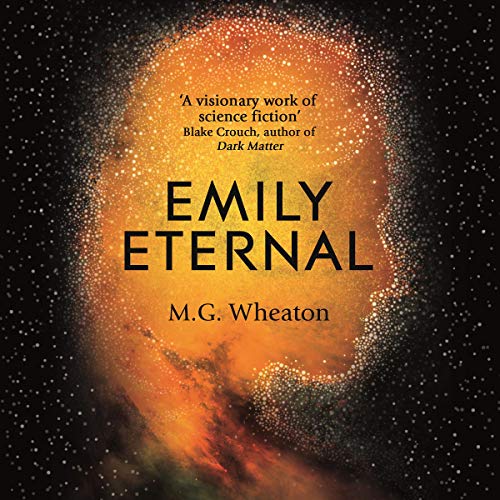 Meet Emily - she can solve advanced mathematical problems, unlock the mind's deepest secrets and even fix your truck's air con. But, unfortunately, she can't restart the sun.

She's an artificial consciousness, designed in a lab to help humans process trauma, which is particularly helpful when the sun begins to die five billion years before scientists agreed it was supposed to.

So, her beloved human race is screwed, and so is Emily. That is, until she finds a potential answer buried deep in the human genome. But before her solution can be tested, her lab is brutally attacked, and Emily is forced to go on the run with two human companions - college student Jason and small-town Sheriff Mayra.

As the sun's death draws near, Emily and her friends must race against time to save humanity. But before long it becomes clear that it's not only the species at stake but also that which makes us most human.

Switch between reading the Kindle book & listening to the Audible narration with Whispersync for Voice.
Get the Audible audiobook for the reduced price of $9.99 after you buy the Kindle book.
Learn more about membership
By completing your purchase, you agree to Audible’s Conditions Of Use and Privacy Notice.
Sold and delivered by Audible, an Amazon company

3.9 out of 5 stars
3.9 out of 5
83 global ratings
How are ratings calculated?
To calculate the overall star rating and percentage breakdown by star, we don’t use a simple average. Instead, our system considers things like how recent a review is and if the reviewer bought the item on Amazon. It also analyses reviews to verify trustworthiness.

Gibbs
2.0 out of 5 stars Ends arbitrarily
Reviewed in the United Kingdom on 29 April 2019
Verified Purchase
Starts quite well with a humanized AI as narrative voice, describing life in the last days of the sun, but rapidly dissolves into arbitrary violence and finally an absurd "leap in human evolution" to escape the inevitable.
Read more
Report abuse

NJ
1.0 out of 5 stars Disappointing
Reviewed in the United Kingdom on 29 May 2019
Verified Purchase
I did not enjoy this at all. Too tecky, too heavy.
Read more
Report abuse

SSMann
5.0 out of 5 stars Unputdownable
Reviewed in India on 29 December 2019
Verified Purchase
A deeply fantastic book. I couldn't stop reading it. Theind of AI, the deliberation on free will and then the entire pace. It's a scorcher.
Read more
Report abuse

Coldnight
4.0 out of 5 stars I don't have an EGO!
Reviewed in the United Kingdom on 10 February 2019
Vine Customer Review of Free Product( What's this? )
I do not have lots of experience of science fiction stories and therefore I don't know how Emily Eternal compares to other stories within said field. So, judging it as I find it: I love the cover of the book; don't change it publishers! Emily is not the outcome of a laboratory's work on Artificial Intelligence but that of Artificial Consciousness – a nice distinction, indeed. “She” comes in useful because the Sun is going to die far earlier than scientists predicted and she is consulted by some learned dignitaries to enter into the consciousness of humanity in order to save DNA for future, post apocalypse, Earth.

The problem being that certain groups want to apprehend this Consciousness to serve their own purpose.

I find the concept of Consciousness being conscious of itself quite amusing. In many ways I am already primed to enjoy such a story as this one. However, I do feel that the author hasn't quite attained a level of authorship that would cause me to feel riveted by either the story or his penmanship. One moment we are being introduced to the concept of “Emily” and then far too soon, without sufficient deepening of plot, raids take place and persons associated with Emily are killed. Then Emily is fleeing with 2 friends, if one will allow such a term.

We later learn that there was in fact a second version of Emily known as Emily-2 who tries to thwart the efforts of Emily because, unlike Emily who has, by entering into the minds of humans, learnt of the more loving side of being human, only wants to control – not get involved in wishy-washy humane concepts.

I don't believe in mirroring every aspect of a book and therefore I will not tell you how Emily Eternal concludes. I suspect, indeed hope, that many of you will not be as pedantic and analytical as I am and therefore will not let the occasional inconsistency of plot spoil your enjoyment of Emily should you decide to purchase Emily Eternal.
Read more
2 people found this helpful
Report abuse

Tansydog
5.0 out of 5 stars Emily Eternal
Reviewed in the United Kingdom on 7 March 2019
Vine Customer Review of Free Product( What's this? )
A very unique science fiction novel, 'Emily Eternal' tells the story of Emily, an Artificial Consciousness (AC - different to an Artificial Intelligence, in ways she herself explains!) designed to interface with people and help them to process trauma by accessing their memories. While Emily does not have a physical body, she can be perceived as such by use of an interface chip worn by a human. This process was working well until a planetary disaster is shown to be imminent - the sun is dying, five billion years ahead of schedule. This leads governmental teams to issue a different mission for Emily, using her massive processing power to capture the information from human brains to enable the species to survive beyond planetary extinction. Things begin to go awry, however, and she is forced to go 'on the run' with her crush, student Jason, and a retired policewoman called Mayra.