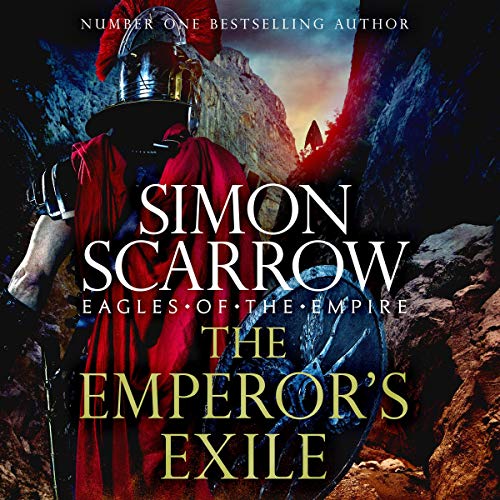 The gripping and action-packed new Roman army adventure in the Eagles of the Empire series by Sunday Times best-selling author Simon Scarrow. The perfect listen for fans of Conn Iggulden and Bernard Cornwell.

Tribune Cato and Centurion Macro, hardened veterans of the Roman army, have faced the empire's enemies from Britannia to Parthia, from Hispania to Judea. Now once again they are on a mission that will imperil their lives and those of all who serve with them. Loyal to the last to their comrades in battle, fearless in the face of the most brutal or barbaric opponents, they are the finest men the emperor can call on in the service of Rome.

4.5 out of 5 stars
4.5 out of 5
3,756 global ratings
How are ratings calculated?
To calculate the overall star rating and percentage breakdown by star, we don’t use a simple average. Instead, our system considers things like how recent a review is and if the reviewer bought the item on Amazon. It also analyses reviews to verify trustworthiness.

Jane Lowe
5.0 out of 5 stars Another exciting adventure in the world of Macro and Cato.
Reviewed in Australia on 8 December 2020
Verified Purchase
Once again Simon Scarrow continued to hold my attention and joy with the latest Macro and Cato journey. The only time I am upset with Simon Scarrow is the last word, last line on the last page - end. Knowing the stories of this pair must realistically end sometime I hope there are many more enjoyable hours to spend with them. Thank you Simon Scarrow for the many hours I spend escaping to the world of Ancient Rome.
Read more
Helpful
Report abuse

S. Crouch
4.0 out of 5 stars A great read covering a rarely visited Roman province
Reviewed in Australia on 21 December 2020
Verified Purchase
While Macro isn't present for the majority of this book it's still a great read. Full of interesting characters as usual and the setting is unusual because I can't recall a Roman empire novel ever being set in Sardinia before. What I like about the Cato and Macro stories is the authentic picture painted of the 1st century AD Roman empire and
I look forward to further books in the series.
Read more
Helpful
Report abuse

andrew wood
4.0 out of 5 stars No surprises
Reviewed in Australia on 23 November 2020
Verified Purchase
Exactly what I was expected from S Scarrow
Read more
Helpful
Report abuse

Curtis Hacon - Give A Sh!t
5.0 out of 5 stars Incredible books!
Reviewed in Australia on 2 May 2021
Verified Purchase
I absolutely love this series. I’ve never read 19 books by one author one after the other. Addictive!
Read more
Helpful
Report abuse

dougie rea
5.0 out of 5 stars It’s like listening to a old friend tell a tale
Reviewed in Australia on 20 November 2020
Incredible as ever the adventure continues!
Read more
Helpful
Report abuse
See all reviews

Kindle Customer derek uk
2.0 out of 5 stars Lost the plot !!
Reviewed in the United Kingdom on 21 December 2020
Verified Purchase
Has the author the run out of ideas or has this been rushed out to meet the publishers deadline.I've read all the books in this series and this is poor compared to the previous 18 books.I'll not spoil it for new readers but at about 70 pages into the actual story you see how it's going to pan out in the end along with the varied sub plots
But why did Scarow wrap it up in the last few pages then do an epilogue back in Rome, even that was not finalised.
This book feal't padded out, too much chitchat and looking around etc not enough dooing things/action.
What is also noticeable is the length of the book,18 pages of front matter then over 30 pages at the back previewing a new book on W.W. Two.
This seems like a 240/50 mediocre short story padded out to resemble this authors previous excellent books in this seties.
Shame on you Headline/Simon Scarow. Get it right for the next book !
Read more
28 people found this helpful
Report abuse

Malcolm R
2.0 out of 5 stars Another duff one
Reviewed in the United Kingdom on 15 January 2021
Verified Purchase
For the most part I found this rather dull, too much thinking and explanation and not enough doing and action. The essential story is just about OK - ridding Sardinia of some nasty people - and that is half done despite Cato losing yet more soldiers and an eye himself! The other half is owing to COVID-19 or the Roman equivalent. He sails from an epidemic and straight to Rome no quarantine for him. The rest is padding and Cato manages to fall in love again. I thought the last one was substandard and this is just manufactured.
Read more
16 people found this helpful
Report abuse

B. Nicholson
5.0 out of 5 stars Yet another great yarn from Simon Scarrow.
Reviewed in the United Kingdom on 21 November 2020
Verified Purchase
I dont think I will be giving too much away when I say that Macro disappears (retires) early on in the book and I spent the whole time wishing he was there alongside his sidekick and it did spoil it a bit . Nevertheless, it was a good tale and anyone following Cato will enjoy. I could not put it down and finished in 2 days - I wished I had paced myself because nowI have about a year for the next one to come along. Oh and I guess I might tell you it was very topical as there is an epidemic (not pandemic) of a dreadful plague. Made you feel like you understood everything they were going through!
Read more
7 people found this helpful
Report abuse

Mr. John Walsh
5.0 out of 5 stars A different but very enjoyable read
Reviewed in the United Kingdom on 24 February 2021
Verified Purchase
If you are looking for big battles with large armies and Roman Legions fighting hordes of Barbarians, Germanic tribes or Parthians hordes, then this is not the novel for you. But, if like me, you have followed the adventures, battles, missions and campaigns that the two main characters undertake in the previous novels, then this tale is just as enjoyable. Yes, it was sad that Macro is only in the book for a short period but I have a feeling he will return and be involved in the next adventure alongside Cato. However, for this adventure, Marco is replaced by a sort of Roman James Bond. I was a bit dubious about this character at first but he certainly grew on me as the narrative progressed. So, instead of big battles, in this tale we see the other side of running an Empire and the problems that can arise. Cato and Apollonius are charged by the Emperor to sort out a rebellion on the island of Sardinia. Not only do they have to sort out a rebellion, they have to look after the Emperor's exiled mistress and prevent a plague from spreading throughout the island. How they tackle these problems makes for great reading and although I would prefer to read about their role in big battles, it made a very interesting and entertaining read. I would recommend this novel for anyone following Cato and Macro and in fact, for anyone interested in Roman period historical novels.
Read more
5 people found this helpful
Report abuse

Clemens A. Schoonderwoert
4.0 out of 5 stars Heroic Cato In Exciting Sardinian Outing!
Reviewed in the United Kingdom on 19 February 2021
Verified Purchase
This eventful Roman adventure is already the 19th instalment of the wonderful "Eagles of the Empire" series, from the formidable author, Simon Scarrow.

At the beginning of the book you'll find a well-drawn map of Sardinia in the 1st Century AD, as well as a Cast List with real great historical and wonderful fictional characters who are featuring in this historical novel of Roman power and control.

Its another action-packed Roman adventure, but I miss the usual banter between Cato and Macro after Macro and Petronella's departure, and although the new one, an individual called Apollonius is doing his best to fill in the void, still in my view its different and not so sparkling and enjoyable as it is (was) between Cato and Macro.

Storytelling is for certain of a superb quality, all the characters are lifelike and believable, while the deadly atmosphere in Sardinia, with also the killing pestilence in their midst, comes splendidly off the pages.

This book is set in the year, AD 57, during the reign of Emperor Nero, and Prefect Cato and Senior Centurion Macro have returned to Rome from the Eastern campaign with General Corbulo, only to find an Imperial Court uneasy and hostile towards their achievements as well as towards Nero and his mistress, Claudia Acte.

Prefect Cato is stripped from his title of Prefect of the Praetorians, due to his actions in the East with General Corbulo, and as a consequence he's sent by Senator Seneca to Sardinia to escort Claudia Acte to her place of exile, but before that happens he and Macro will say their goodbyes, and part ways with Macro and Petronella heading for Britannia, to live and work there, leaving Cato with his important mission to Sardinia, with a select group of Centurions and the spy/assassin, Apollonius, to bring Roman law and order to this place, a place that's also ravaged by a deadly disease.

What is to follow is a Roman adventure with plenty of action, no doubt about that, but its also a book with a similar theme as in "Invictus", in what the local tribal revolt is concerned, but now adding to it is a deadly pestilence and with only Cato in the headlines an a supporting role for Apollonius, so that overall this engaging book is somewhat inferior to its predecessors in intensity, interaction, warfare and (real) historical battles against fearsome opponents like the Parthians, or the tribes from Germania, or the Celts from Britannia, and I can only hope that the author will return to that kind of formula again.

Really recommended, for this is another very good addition to this fantastic series, but not the very best in my opinion, and to come back to this episode I want to call it: "Heroic Cato In Exciting Sardinian Outing"!
Read more
2 people found this helpful
Report abuse
See all reviews