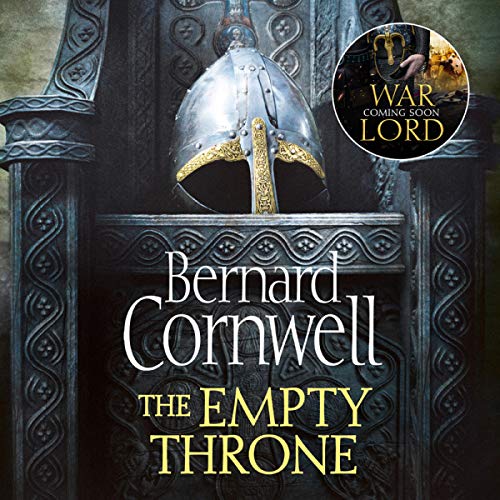 The new novel in Bernard Cornwell's number-one best-selling series "The Warrior Chronicles", on the making of England and the fate of his great hero, Uhtred of Bebbanburg.

In the battle for power, there can be only one ruler.

England is fractured, torn apart more by internal fighting than the threat of Viking invasion. The ruler of Mercia is dying, leaving no legitimate heir. His wife is a formidable fighter and great leader, but no woman has ever ruled over an English kingdom. And she is without her strongest warrior and champion, Uhtred of Bebbanburg.

So the scene is set for an explosive battle between elders and warriors for an empty throne. The vacant throne leaves a dangerous opportunity for the rival West Saxons to seize Mercia. But Edward of Wessex is distracted by the succession of his own throne, with two heirs claiming the right to be West Saxon king. And while the kingdoms are in disarray, the Vikings, this time coming from the west, will go on the rampage once more.

The very future of England hangs in the balance. A hero is needed, a hero who can destroy the threat to Mercia, a hero who will ultimately decide the fate of a nation…

Switch between reading the Kindle book & listening to the Audible narration with Whispersync for Voice.
Get the Audible audiobook for the reduced price of $12.49 after you buy the Kindle book.
Learn more about membership
By completing your purchase, you agree to Audible’s Conditions Of Use and Privacy Notice.
Sold and delivered by Audible, an Amazon company

4.7 out of 5 stars
4.7 out of 5
5,674 global ratings
How are ratings calculated?
To calculate the overall star rating and percentage breakdown by star, we don’t use a simple average. Instead, our system considers things like how recent a review is and if the reviewer bought the item on Amazon. It also analyses reviews to verify trustworthiness.

Jane Dickson
5.0 out of 5 stars Page turner
Reviewed in Australia on 30 May 2022
Verified Purchase
Another brilliant read from Cornwell. Uthred’s journey continues. The story encompasses all the senses as you are given the sense of swords clanging, hot sticky blood, smelly breath and the taste of sour ale. The bonds between characters are strong and it is a very entertaining believable story.
Read more
Helpful
Report abuse

Charlie
4.0 out of 5 stars another great book
Reviewed in Australia on 13 November 2014
Verified Purchase
Cornwall always writes great historical fiction and it is interesting that the earlier he goes in English history the better he does. He has done better novels but this one is still up there.
Read more
Helpful
Report abuse

Amanda Wright
4.0 out of 5 stars Great historical drama series.
Reviewed in Australia on 5 November 2015
Verified Purchase
I have really enjoyed this whole series so far. Love the historical facts about places I know and I have learnt so much without knowing it. The characters (fictitious and real) are engaging and you feel as if you are standing on the sidelines watching the battle scenes. Highly recommended.
Read more
2 people found this helpful
Helpful
Report abuse

Clint
5.0 out of 5 stars Don't let the series finish
Reviewed in Australia on 5 February 2016
Verified Purchase
Latest great blood and guts and sex Warrior
Chronicles novel. Bernard is doing a remarkable job of spinning out this series forcing me to buy more books. Problem is, I can't put my Kindle down once I start reading.
Read more
Helpful
Report abuse

Ruth garlick
5.0 out of 5 stars Can't wait for the next one
Reviewed in Australia on 24 June 2017
Verified Purchase
This series has caught my imagination and my interest in the history of those times. The characters are easy to like and the adventure is a great place to escape to.
Read more
Helpful
Report abuse
See all reviews

carolyn j
5.0 out of 5 stars Compelling, addictive, intelligent blood and guts swashbuckling historical adventure
Reviewed in the United Kingdom on 27 January 2016
Verified Purchase
I read book 1 - 8 of the Last Kingdom series back to back as if they were one omnibus through a wet and miserable January. I had seen the BBC 2 series which covered book 1 and book 2 and found The Last Kingdom and The Pale Horseman such good reads I was glad that I had not read them before seeing the series. I was impressed by the explanations of the internal struggle Uhtred has to establish his identity,, and the uniqueness into which he forges his experiences , philosophy and education into the warrior and man he grows into. I was also impressed by the historical integrity Conwell brought to the background of Uhtred's adventures. Definite page turners all the way through. Loved every minute spent reading 1-8.
Although one should not bring 21st century thinking, morals and mores to 10th century life, one could not help thinking that 'everything changes and nothing changes.' Cornwell does encourage the reader to stop and think beyond the swashbuckling thoughout.
I am not sure whether Uhtred's forewords are a good or bad thing - whether they telegraph the ultimate outcome of the scrapes and adventures or whether they enhance the enjoyment of the finer points of the tale...
I was disappointed at the Kindle price of book 9- Warriors of the Storm, which at the present time is more than the hardback edition. Although I am hooked enough to want to read it very badly, principle prevents me following on at this time.
Read more
16 people found this helpful
Report abuse

Lorraine Sandham
5.0 out of 5 stars The Empty Throne
Reviewed in the United Kingdom on 20 March 2021
Verified Purchase
Bernard Cornwell writes a gripping story. When I begin an 'Uhtred' book, I find it so hard to put down. Well-crafted descriptions set the tone for the story, bringing the dark ages environment to life. I can almost smell the meat roasting over the campfires, the sounds of men sharpening their weapons of wet-stones, the stench of the combined sweat of man and horse. This man can set the scene, ready for the political and romantic intrigues surrounding Uhtred. But enough of that, Bernard Cornwell writes great books of this time period, and if that's what you're into, you won't do better than Mr Cornwell.
Read more
Report abuse

Boring Old Fart
5.0 out of 5 stars Gripping and gory historical novel
Reviewed in the United Kingdom on 4 January 2021
Verified Purchase
This is one of a series about Uhtred, Lord of Bebbanburg (Bamburgh) set around the time of King Alfred. Uhtred is a Saxon war leader, raised as a Dane but fighting to stop the Danes taking over the kingdoms of England. It is well written as you would expect from Bernard Cornwell and holds your attention so you don't want to put it down. The descriptions of battle scenes are not for the faint hearted but capture the brutality of the times.
Read more
One person found this helpful
Report abuse

John Hopper
4.0 out of 5 stars eighth novel in the series
Reviewed in the United Kingdom on 31 March 2017
Verified Purchase
This is the eighth novel in the seemingly endless series about Uhtred of Bebbanburg, now given a new lease of life through the second TV series, which is well made and seems well cast to fit the characters from the novels. The seat of action this time is Mercia and the death of its ruler Ethelred, married to Ethelfleda, the famous and powerful Lady of the Mercians, and the late King Alfred's sister. Uhtred is a less all powerful character here due being wounded, and his namesake son comes more to the fore here. Beyond this, it's the usual mayhem and killing, but well written and with a few more minor characters entering the fray.
Read more
5 people found this helpful
Report abuse

Jomeo
5.0 out of 5 stars Wicked fast and gripping.
Reviewed in the United Kingdom on 1 June 2016
Verified Purchase
Another satisfying Uthred book. As usual the pace is wicked fast from start to finish.

I read this book in under a day. LIterally could not (and didn't want to) put it down. The plot of this book is as compelling as the rest of them. There is as much action and and gore as in previous books and Cornwell, as always, does not disappoint. It is a slick production and one that is as entertaining and emotional as any blockbuster. After reading 8 of his Uthred books I cannot get enough and when this saga comes to a close, it will feel like the loss of a friend. As ridiculous as that sounds, reading this whole series you cant help but invest part of yourself in the story.

Long may this series continue. A world with Uthred Uthredson is not a world that I wish to see.
Read more
4 people found this helpful
Report abuse
See all reviews