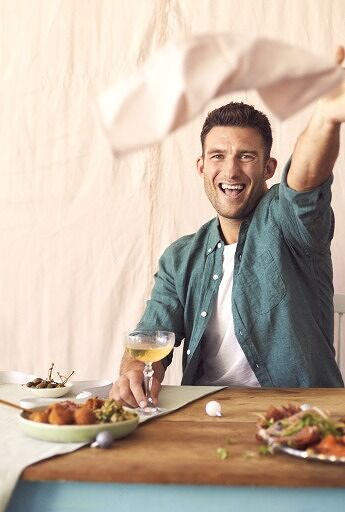 by Scott Parker (Author), Eric Westman (Author)
4.6 out of 5 stars 38 ratings
See all formats and editions
Sorry, there was a problem loading this page. Try again.

Each recipe features fresh and healthy ingredients to meet your individual carb threshold and dietary needs.

End Your Carb Confusion- The Cookbook packs in 100 recipes that have been carefully crafted to fit within the three phases of Dr. Westman's acclaimed diet plan- low, moderate, and higher carb. This phased setup allows you to adjust your carbohydrate intake as needed to meet your health goals and maximize your long-term success.

Whether you are strict keto, low-carb, or just want to lighten up on carbs from time to time, this is your ultimate resource for delicious recipes. It features everything from family favorites to succulent steaks and perfect pairings, along with culinary tips from acclaimed chef Scott Parker on making the most of your dishes and flavor combinations. Scott has taken all the guesswork out of preparing delicious meals by creating an easy-to-follow format and simple recipes with accessible and familiar ingredients. End Your Carb Confusion- The Cookbook is complete with straightforward charts and guides to help you navigate each phase with ease and confidence.

Used as a standalone cookbook or in conjunction with Westman's bestselling book, End Your Carb Confusion, this new cookbook is for anyone looking to find better health or simply augment their recipe file. With Dr. Westman and Scott by your side, you will feel better than ever and love your time in the kitchen.

Scott Parker
Scott Parker trained as a chef at the prestigious Westminster Kingsway College in London. While mastering the culinary arts, Scott gained real-world experience while working at The Grosvenor House Hotel and The Bentley's Restaurant 1880 headed up by Andrew Turner. After receiving his diploma, Scott continued to fine-tune his skills at Pied Terre before moving on to Claude Bosi's Hibiscus, where he spent two years training under the French Master Chef. Scott furthered his career at Joel Robuchon's L'atelier London, then teamed up with Daniel Clifford to work as sous chef and eventually head chef at the two Michelin-starred Midsummer House. Scott now runs the development kitchens for top South African retailer Woolworths.

Before working together on End Your Carb Confusion- The Cookbook, Scott and Dr. Eric Westman teamed up to create online cooking classes for Adapt Your Life Academy.

Dr. Eric Westman
Eric C. Westman, MD, MHSis an Associate Professor of Medicine at Duke University. He is Board Certified in Obesity Medicine and Internal Medicine and founded the Duke Keto Medicine Clinic in 2006 after 8 years of clinical research regarding low carbohydrate ketogenic diets.He is Past-President and Master Fellow of the Obesity Medicine Association and Fellow of TheObesity Society. He is an editor of the textbook- Obesity- Evaluation & Treatment Essentials, and author of the New York Times Bestseller The New Atkins for a New You, Cholesterol Clarity, and Keto Clarity. He is co-founder of Adapt Your Life, an education and product company based on low carbohydrate concepts.
Start reading End Your Carb Confusion on your Kindle in under a minute.

Scott Parker is a two Michelin-starred chef trained at the prestigious Westminster Kingsway College in London. While mastering the culinary arts, Scott gained real-world experience while working at The Grosvenor House Hotel and The Bentley’s Restaurant 1880 headed up by Andrew Turner. After receiving his diploma, Scott continued to fine-tune his skills at Pied à Terre before moving on to Claude Bosi’s Hibiscus, where he was junior sous chef. There he spent an invaluable two years training under the French Master Chef. Scott furthered his career at Joel Robuchon’s L’atelier London. After leaving L’atelier, Scott teamed up with Daniel Clifford to work as sous chef and eventually head chef at Midsummer House.

After Scott left cooking in professional kitchens behind at age twenty-six, he devoted his life to maintaining a healthy lifestyle and developing foods for some of the world’s best retailers. Top South African retailer Woolworths recruited him to Cape Town to be their product development manager, then asked him to take over the running of its development kitchens. Scott has been featured on the cover of Men’s Health in three countries and has developed over one thousand products.

Not only does Scott have a passion for making great food, but the subject of healthy eating is a very personal one for him. After a health scare in 2020, he redoubled his efforts to take good care of his body, which dovetailed nicely with Dr. Westman’s low-carb approach. Before working together on End Your Carb Confusion Cookbook, Scott and Dr. Westman teamed up to create online cooking classes for the Adapt Your Life Academy.

4.6 out of 5 stars
4.6 out of 5
38 global ratings
How are ratings calculated?
To calculate the overall star rating and percentage breakdown by star, we don’t use a simple average. Instead, our system considers things like how recent a review is and if the reviewer bought the item on Amazon. It also analyses reviews to verify trustworthiness.

Amazon Customer
5.0 out of 5 stars Amazing Informative Cook Book
Reviewed in the United Kingdom on 4 May 2022
Verified Purchase
This book is so easy to follow. Being an experienced chef, with the easy to follow delicious recipes and photos I would highly recommend this book to anyone. The personal anecdotes, makes the book even more personal that you cannot put it down!!

When is the next one coming out??

Kristen hulme
5.0 out of 5 stars The greatest cookbook I’ve ever read!
Reviewed in the United Kingdom on 30 April 2022
Verified Purchase
Wow, after years of buying celeb chefs cookbooks and trying to recreate those dishes, I’ve finally found the perfect book. Scott’s recipes are incredible and you can translate them to the plate with ease. Please let us know when the next ones out and would love a Christmas edition!!
Read more
Report abuse

Amazon Customer
5.0 out of 5 stars Incredible cook book!
Reviewed in the United Kingdom on 4 May 2022
Verified Purchase
Incredibly informative and easy to follow cook book to reduce the confusion when it comes to cutting down on carbs.
The recipes are absolutely delicious and there’s something for everyone.
Highly recommend this amazing book for everyone.
Read more
Report abuse

Cameron Van der burgh
5.0 out of 5 stars Easy, quick, healthy & DELICIOUS!
Reviewed in the United Kingdom on 1 May 2022
Verified Purchase
Really love this book, guidelines are easy to follow & wide variety of dishes means you don’t abandon the diet/lifestyle because you get bored of dishes. Highly recommend to anyone following Keto or just looking to cut down on carbs.
Read more
Report abuse

Amazon Customer
5.0 out of 5 stars Excellent choice, definitely recommend
Reviewed in the United Kingdom on 31 May 2022
Verified Purchase
A must buy. I will be recommending to family and friends.
Read more
Report abuse
See all reviews