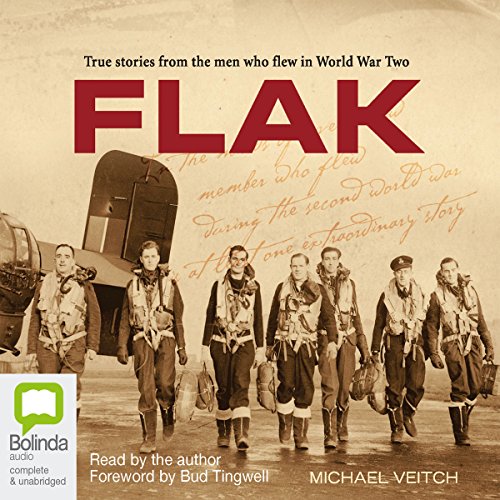 Michael Veitch (Author), Bolinda Publishing (Narrator), Bolinda Publishing Pty Ltd (Publisher) & 0 more
4.5 out of 5 stars 17 ratings
See all formats and editions
Sorry, there was a problem loading this page. Try again.
The inspiring true stories of combat and camaraderie, read by the author with foreword by Bud Tingwell.

Michael Veitch's life-long obsession with the aircraft of the Second World War led him to conclude that every single person who flew, or flew in them has at least one extraordinary story to tell. With most of these veterans in their 80s, he knew that it was a matter of urgency to find them now, before their personal stories disappear forever.

So, over the course of a year, Veitch interviewed over 50 former aircrew across Australia, many of whom had never spoken about their experiences before, even to their families. The result is FLAK - a collection of vivid, unforgettable stories from RAAF veterans about their experiences of combat in World War II. It is also an account of the strange, sometimes obsessive journey of the author himself, as he explores a passion held since childhood.

From bomber pilots to fighter aces, from rear gunners to bomb aimers, from stories of death and fear to tales of humor and comradeship, Michael has helped unearth the extraordinary stories of ordinary men living and fighting in extraordinary times.

Read more
©2006 Michael Veitch (P)2007 Bolinda Publishing Pty Ltd.
Previous page
Next page
Learn more about membership
By completing your purchase, you agree to Audible’s Conditions Of Use and Privacy Notice.
Sold and delivered by Audible, an Amazon company

4.5 out of 5 stars
4.5 out of 5
17 global ratings
How are ratings calculated?
To calculate the overall star rating and percentage breakdown by star, we don’t use a simple average. Instead, our system considers things like how recent a review is and if the reviewer bought the item on Amazon. It also analyses reviews to verify trustworthiness.

DAVID
5.0 out of 5 stars Fantastic
Reviewed in Australia on 8 March 2019
Verified Purchase
Fantastic to have these awesome young men’s dedication and service recorded for the future before it becomes unavailable.
Not glorifying but detailing wars commitment.
Read more
Helpful
Report abuse

Steve W
5.0 out of 5 stars Great read
Reviewed in Australia on 19 October 2014
Verified Purchase
Excellent read. Being a bit of an aircraft war story nut I found this a very different and engaging approach.
Read more
Helpful
Report abuse

Owen Zupp
5.0 out of 5 stars War Across Many Skies.
Reviewed in Australia on 5 July 2020
I had read and reviewed a number o Michael Vietch’s works before I sat down to read “FLAK”. Consequently, this being his earlier work, I was somewhat out of sequence. However, this made no difference to the experience as the collection of airmen’s tales in his books are timeless.
In fact, there is a charm in the way that the reader is taken from different periods of the war, varied theatres of operation and even war by both day and night. This diversity of perspectives on different forms of aerial combat keep the reader interested with a fresh start with each new chapter.
The recollections of the veterans is sharp and Veitch’s personable style draws out tales that, in some cases, have been buried for decades. That style then conveys these recollections to the reader with honesty and humanity.
I highly recommend reading the words of these airmen on the pages of “FLAK”. Thankfully, through such works, those that served will not be forgotten.
Read more
Helpful
Report abuse
See all reviews

Barry Besold
5.0 out of 5 stars Five Stars
Reviewed in the United States on 28 February 2016
Verified Purchase
A very good read, Stories about combat flying and flyers at its best.
Read more
Report abuse