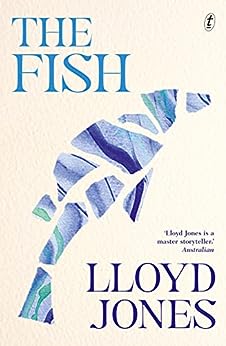 by Lloyd Jones (Author) Format: Kindle Edition
See all formats and editions
Sorry, there was a problem loading this page. Try again.

Then she lifts the Fish up from the bassinet and holds him out to me.

I manage to clap my hands either side of the fish bundle. But I feel like I am holding an expensive glass. Once you’re told not to drop it, all you can think of is the glass shattering across the floor.

When the baby is born—in a shabby caravan at a beach campground—it’s clear he is not like other babies. But the family will try hard to protect and love and accept him. Perhaps all the more to make up for letting his troubled mother down.

The young uncle grapples with his connection to the Fish. And as he tries to understand his family and its confusing secrets and shame, his sense of his own place in the world begins to crumble.

Lloyd Jones’s unique lyrical style is mesmerising in this tender story of family bonds, both strained and strengthened by tragedy, and the redemptive power of writing.

Lloyd Jones was born in New Zealand. His best-known works include Mister Pip, winner of the Commonwealth Writers’ Prize and shortlisted for the Man Booker Prize, The Book of Fame, winner of numerous literary awards, Hand Me Down World, A History of Silence and The Cage.

Lloyd Jones was born in New Zealand. His best-known works include Mister Pip, winner of the Commonwealth Writers' Prize and shortlisted for the Man Booker Prize, The Book of Fame, winner of numerous literary awards, Hand Me Down World, A History of Silence and The Cage. --This text refers to the paperback edition.

Lloyd Jones is the author of several novels and short story collections which include Mister Pip, winner of the Commonwealth Writers' Prize best book award and shortlisted for the Man Booker Prize in 2007, The Book of Fame and Hand Me Down World, which was shortlisted for the Berlin International Prize. He has also published a memoir, A History of Silence. He lives in New Zealand.

3.1 out of 5 stars
3.1 out of 5
15 global ratings
How are ratings calculated?
To calculate the overall star rating and percentage breakdown by star, we don’t use a simple average. Instead, our system considers things like how recent a review is and if the reviewer bought the item on Amazon. It also analyses reviews to verify trustworthiness.

There are 0 reviews and 7 ratings from Australia

Shona Bigham
3.0 out of 5 stars Sad tale
Reviewed in the United States on 17 July 2022
Verified Purchase
Although this book was compulsive reading, it was a melancholy tale which I did not particularly enjoy reading.
I needed to reach the end to find out about each of the unappealing characters.