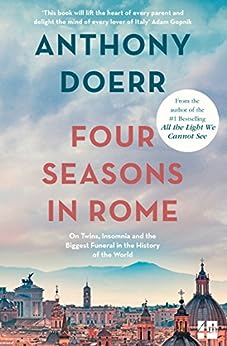 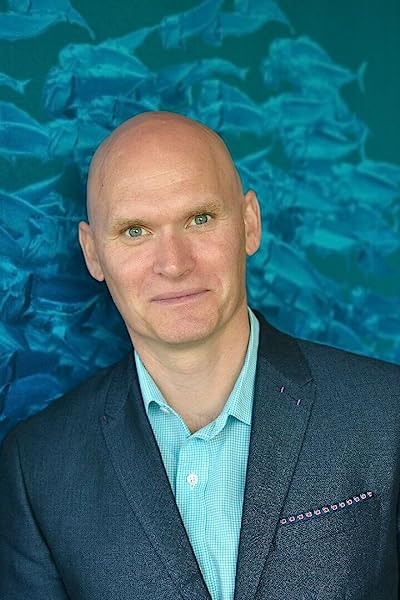 Four Seasons in Rome: On Twins, Insomnia and the Biggest Funeral in the History of the World Kindle Edition

by Anthony Doerr (Author) Format: Kindle Edition
See all formats and editions
Sorry, there was a problem loading this page. Try again.

On the same day that his wife gave birth to twins, Anthony Doerr received the Rome Prize, an award that gave him a year-long stipend and studio in Rome…

‘Four Seasons in Rome’ charts the repercussions of that day, describing Doerr's varied adventures in one of the most enchanting cities in the world, and the first year of parenthood. He reads Pliny, Dante, and Keats – the chroniclers of Rome who came before him – and visits the piazzas, temples, and ancient cisterns they describe. He attends the vigil of a dying Pope John Paul II and takes his twins to the Pantheon in December to wait for snow to fall through the oculus. He and his family are embraced by the butchers, grocers, and bakers of the neighbourhood, whose clamour of stories and idiosyncratic child-rearing advice is as compelling as the city itself.

This intimate and revelatory book is a celebration of Rome, a wondrous look at new parenthood and a fascinating account of the alchemy of writers.

Note that it has not been possible to include the same picture content that appeared in the original print version.

Anthony Doerr found himself in the perfect Eternal City with the eternal Paternal Problem: how to care for two beautiful newborn twins while still doing his work as a writer and student and observer. The result is a funny, precise, touching account of cultural barricades crossed and fatherly exhaustions overcome; a story of the universalities of parenting and the specificities of Roman life that will lift the heart of every parent and delight the mind of every lover of Italy.
-- Adam Gopnik, author of Through the Children's Gate and From Paris to the Moon

Anthony Doerr is dazzling in this book, in the way he celebrates the joys as well as the pain of being a parent and in love, being a writer and being in Rome, reminding us that certain experiences never grow stale when they are expressed through the fresh eyes of a real writer.
-- Azar Nafisi, author of Reading Lolita in Tehran

Doerr's journal is a love letter written with the ear of a musician, the sensibility of a Buddha, the heart of an inamorato. Rome is the chosen beloved, but Doerr's true subject is writing.
-- Sandra Cisneros, author of Caramelo

I loved this book which, in turn, made me laugh and weep at the relentless twins, Owen and Henry, who never sleep, the descriptions of Rome, the clouds, the light -- especially the light -- the people Doerr meets on the street, again the light, Pliny, Jonah's feet dangling from the Sistine Chapel ceiling, Shauna's steadfastness, Doerr's generous and intelligent spirit, his discerning eye and his perfect prose. Complimenti!
-- Lily Tuck, author of Interviewing Matisse --This text refers to an alternate kindle_edition edition.

Anthony Doerr is the author of the Pulitzer Prize-winning novel All the Light We Cannot See. He is also the author of two story collections Memory Wall and The Shell Collector, the novel About Grace, and the memoir Four Seasons in Rome. He has won four O. Henry Prizes, the Rome Prize, the New York Public Library's Young Lions Award, the National Magazine Award for fiction, a Guggenheim Fellowship, and the Story Prize. Doerr lives in Boise, Idaho, with his wife and two sons. --This text refers to an alternate kindle_edition edition.

Anthony Doerr has won numerous prizes for his fiction, including the Pulitzer Prize and the Carnegie Medal. His novel, 'All the Light We Cannot See,' was a #1 New York Times Bestseller and his new novel, 'Cloud Cuckoo Land,' published in September of 2021, was a finalist for the National Book Award. Learn more at www.anthonydoerr.com.

4.4 out of 5 stars
4.4 out of 5
945 global ratings
How are ratings calculated?
To calculate the overall star rating and percentage breakdown by star, we don’t use a simple average. Instead, our system considers things like how recent a review is and if the reviewer bought the item on Amazon. It also analyses reviews to verify trustworthiness.

margaret visciglio
3.0 out of 5 stars Four Season in Rome, Insomnia and the Biggest Funeral in the.....
Reviewed in Australia on 21 January 2015
Verified Purchase
I was a bit disappointed in Four Seasons in Rome, Insomnia and the Biggest Funeral in the world by Anthony Doerr. I have spent time in Rome myself and did enjoy reading about the bits of Rome with which I am familiar. On the other hand, I was annoyed that Doerr had acquired a grant to spend time in Rome writing his Magnus Opus and instead ended up writing what appears to be a diary of how to cope with Roman traffic while pushing a pram containing his babies around the streets.
Anyone who has twins is going to have insomnia, and living with twins in an unfamiliar city where you don't speak the language is going to be even more difficult. Doerr is mildly amusing but I felt the story could have been better and although he did evoke a sense of place I found it difficult to emphasise with him and his wife when they appeared to be luxuriating as opposed to the lives of those around them who were bringing up children in more difficult circumstances. I did not suffer from insomnia while reading this book, I found it an effective soporific.
Read more
One person found this helpful
Helpful
Report abuse

Anniemaygo
3.0 out of 5 stars A roman excursion
Reviewed in Australia on 26 November 2015
Verified Purchase
I enjoyed this diary type description of life in. Rome. It is not up to the standard of other Doerr works. The average person would not find his twin babies and their early progress particularly enchanting, though having travelled on an Italian liner with blonde triplets, the greetings and exclamations were nostalgic. I gained little insight into Rome, rain dominated his walks while I am sure sunny days were very frequent. He describes the hot humidity but not the bright cheerful mornings! His ventures into Umbria were the most inviting chapters.
Read more
Helpful
Report abuse

coral heazlewood
3.0 out of 5 stars An American in Rome
Reviewed in Australia on 1 March 2018
Verified Purchase
A very down to earth account of a family attempting to cope in a foreign place without any experience of a different culture, or language.
Read more
Helpful
Report abuse

Pearldiva
3.0 out of 5 stars Disappointing
Reviewed in Australia on 14 June 2018
Verified Purchase
While the descriptions of Rome are charming, this book feels like a series of notes cobbled together and falls well short of the author's previous works.
Read more
One person found this helpful
Helpful
Report abuse
See all reviews

Jibbingking
4.0 out of 5 stars Draws you in
Reviewed in the United Kingdom on 4 September 2020
Verified Purchase
I enjoyed this book, which I found gave a good sense of what it was like for someone arriving in Rome, with his wife and two very young twin boys. It draws you in, and if you've been to Rome, or if you haven't, you get a feel for the experience of that city. Anthony Doerr is a writer who uses imagery very well, so if you like that kind of writing you'll enjoy this. There is no plot, it is simply a very poetic diary of his time there, and of the love for their two boys.
Read more
One person found this helpful
Report abuse

Baf
3.0 out of 5 stars OK
Reviewed in the United Kingdom on 27 March 2021
Verified Purchase
I'd read some of this author's fictional books and thought to give this one a try, particularly since I have relatives who live in Italy and have spent some time in Rome. It's the story of how the author spent a year in that city with his wife and new born twins. He writes evocatively so I felt I was in Rome in many of his descriptions. There seems to be a tendency for certain people to go and live somewhere else without researching anything of that country, their customs or their language, and so they remain "strangers in a strange land". But perhaps the author didn't have time to do that! I like his work but didn't really warm to this one.
Read more
One person found this helpful
Report abuse

Miss Shirley J Moore
5.0 out of 5 stars This is the best book I've read for some time.
Reviewed in the United Kingdom on 4 August 2019
Verified Purchase
Thus book is wonderful and the writer brilliant. I initially borrowed a copy from our local library having just read another of Anthony's Doerr's books that I thought was excellent; 'All The Light We Cannot See'. This one I liked even better for the fantastic quality of writing. So I ordered 2 copies for friends and another for myself as it's a book I shall re read in time...
All copies arrived in a short time and all three in excellent condition.
Read more
2 people found this helpful
Report abuse

JacquelynB
5.0 out of 5 stars Read this book!
Reviewed in the United Kingdom on 29 March 2021
Verified Purchase
I absolutely loved this book. I've been to Rome several times and could reminis about the things I've seen and commiserate about what I missed. I actually felt like I was part of their family.
Read more
Report abuse

J Milverton
5.0 out of 5 stars Great Writing.
Reviewed in the United Kingdom on 21 March 2016
Verified Purchase
A beautifully written book where every word counts. Not just an account of a unique period spent in Rome with a young family but also an insight into the terrors and joys of parenting the first born - in this case times two. To do all that in a foreign country and hectic city takes courage and/or ignorance! He has succeeded in making Rome a desired destination whilst acknowledging the difficulty of ever really belonging in a foreign country.
Read more
4 people found this helpful
Report abuse
See all reviews
Report an issue
Does this item contain inappropriate content?
Report
Do you believe that this item violates a copyright?
Report
Does this item contain quality or formatting issues?
Report