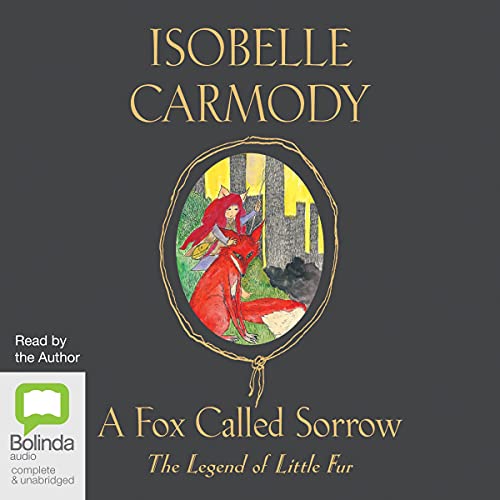 Isobelle Carmody (Author, Narrator), Bolinda Publishing Pty Ltd (Publisher)
4.8 out of 5 stars 6 ratings
See all formats and editions
Sorry, there was a problem loading this page. Try again.
A half-starved fox was limping towards the outskirts of the sprawling grey city over which the storm spread its black and ragged wings. It stopped to sniff at the wind and read the warnings and signals, but its anguish was so great that if the world were to end it would not have minded. It limped on.

The fate of the elf troll, Little Fur, becomes entangled with the mysterious fox, Sorrow, who longs only for death. Together they must travel to Underth, the troll king's underground city, on a dangerous quest to uncover his evil plans. The wise Sett Owl has foreseen that the future of the earth spirit, and perhaps all living things, depends on the success of this quest. Led by a greedy, devious rat, how can they succeed? But how can they fail, when so much is at stake?

The second captivating book in The Legend of Little Fur series.

Read more
©2006 Isobelle Carmody (P)2006 Bolinda Publishers Pty Ltd.
Previous page
Next page
Learn more about membership
By completing your purchase, you agree to Audible’s Conditions Of Use and Privacy Notice.
Sold and delivered by Audible, an Amazon company

4.8 out of 5 stars
4.8 out of 5
6 global ratings
How are ratings calculated?
To calculate the overall star rating and percentage breakdown by star, we don’t use a simple average. Instead, our system considers things like how recent a review is and if the reviewer bought the item on Amazon. It also analyses reviews to verify trustworthiness.

Old Mom
4.0 out of 5 stars Very good, interesting book
Reviewed in the United States on 21 March 2011
Verified Purchase
My daughter, age 6 LOVES fairies, princesses and Harry Potter. She thinks the Little Fur books are marvelous. We read one chapter each night and then review what has happened previously each night. She keeps trying to guess what will happen next and how the book will end. She has read two of the books and can't wait to get the third one of the series.

My 3 year old also likes the books, but her attention span will only get her through about half a chapter at a time.
Read more
Report abuse

Jocelyn
5.0 out of 5 stars Great Children's Books!
Reviewed in the United States on 23 March 2013
Verified Purchase
I love reading this story to my children. It is great to teach your children about goodness and love and that's exactly what Isobelle Carmody does in this series. I love little fur!
Read more
Report abuse
See all reviews