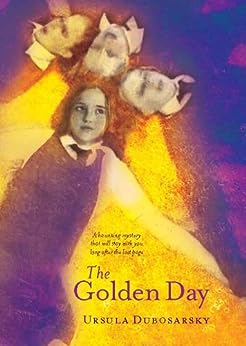 by Ursula Dubosarsky (Author) Format: Kindle Edition
See all formats and editions
Sorry, there was a problem loading this page. Try again.
There were only eleven of them, like eleven sisters all the same age in a large family. Because it was such a very small class, they had a very small classroom, which was perched at the very top of the school - up four flights of stairs, up in the high sky, like a colony of little birds nesting on a cliff. 'Today, girls,' said Miss Renshaw, 'we shall go out into the beautiful Gardens and think about death.'

In the Gardens they meet a poet. What follows is inexplicable, shocking, a scandal. What really happened that day? Is 'the truth' as elusive as it seems? And do the little girls know more than they are letting on?

A haunting and unforgettable novel from a multi-award-winning author.

'The Golden Day is the sort of book that churns something up deep inside the reader; it will be as hard for an adult to forget as for the young people age 12 and older for whom it is intended.' Meghan Cox Gurdhon, Behind Closed Doors" in The Wall Street Journal Sunday August 11 2013."
Read more
Previous page
Next page

Dubosarsky's spare prose explores the space between innocence and adulthood. Shaped by the girls' growing awareness of the world, her scenes are uneasy dreamscapes. Questions about responsibility, violence, sex, fear and death bloom beneath their placed surface. Unanswerable, they linger past the end of this slender but powerful volume.
--The New York Times

In a stunning feat of perspective, Dubosarsky inhabits all 11 girls at once, snaking through a thousand small joys and triumphs and fears and petty grudges as they absorb life's bleakest truths as well their own complicity in them... [T]his is a masterful look at children's numb surprise to the most unsavory of adult developments.
--Booklist (starred review)

Laced with humor amid a steady feeling of dread, the atmospheric narrative chillingly evokes lurking forces capable of tarnishing even the most golden and innocent of days.
--Publishers Weekly (starred review)

Through precise, vivid descriptions, the third-person narrative evokes the contrast between the girls' cloistered school lives and the hard realities of the outside world. ... Read this slender mystery for the meticulous prose and characterization...
--Kirkus Reviews

Chilling, elegant, atmospheric... Ms. Dubosarsky deftly conveys the confusion of childhood, the strangeness of things half-glimpsed and only partly understood. With quiet brilliance she evokes the distinct personalities of the classmates... "The Golden Day" is the sort of book that churns something up deep inside the reader; it will be as hard for an adult to forget as the young people ages 12 and older for whom it is intended.
--The Wall Street Journal

Ursula Dubosarsky is an award-winning author of numerous books for children and young adults. About The Golden Day, her first book with Candlewick Press, she says, The little girls watch, wonder, respond, change, and grow -- and then their childhood is gone, forever. This element of the story, I suppose, is at least partly autobiographical. But, as I say -- all of our teachers come home safe and sound in the end. Ursula Dubosarsky lives in Australia. --This text refers to the hardcover edition.

4.6 out of 5 stars
4.6 out of 5
15 global ratings
How are ratings calculated?
To calculate the overall star rating and percentage breakdown by star, we don’t use a simple average. Instead, our system considers things like how recent a review is and if the reviewer bought the item on Amazon. It also analyses reviews to verify trustworthiness.

D_shrink
5.0 out of 5 stars Strange, Scary Things can happen while at school
Reviewed in the United States on 17 August 2013
Verified Purchase
"'Today girls,' said Miss Renshaw, we shall go out into the beautiful garden and think about DEATH.'" [P3] From the opening we know that sinister things will happen.

The vast majority of the story takes place at a private school for girls in Sydney, Australia during 1967 while the Vietnam War was going on. Our story concerns the teacher, Miss Renshaw, and the eleven girls in her elementary class named Cubby, Icara, Martine, Bethany, Georgina, Cynthia, Dierdre, Elizabeth, Elizabeth, Elizabeth, and Elizabeth. The four Elizabeths are given no last names, and only differentiated by physical characteristics as height and hair style.

It seems that Ms. Renshaw has more than a passing interest in Morgan, the groundskeeper at the Ena Thompson Memorial Gardens where she regularly takes the girls on nature trips. She makes the girls complicit in her romantic diversions by telling them, "We won't mention these meetings with Morgan or other stuff will we girls...We won't mention Morgan." [p19] But the girls were a lot smarter than Miss Renshaw gave them credit for, as "They all knew...the real reason Miss Renshaw want to go out into the gardens that morning. It was not to think about death. Miss Renshaw wanted to see Morgan."

Soon after Miss Renshaw takes her class, with Morgan leading them, to some nearby Aboriginal caves supposedly to see the cave drawings at which time she and Morgan vanish. Yet as the girls pledged not to reveal anything about Morgan, they can't fully tell what happens to the authorities. The rest of the book is about just what happened and how it affects each of their lives.

The book is a close copy of an earlier book along very similar lines which was originally released by another Australian author Joan W. Lindsay in 1967 and was called PICNIC AT HANGING ROCK  Picnic at Hanging Rock  after which a 1975 movie also titled  Picnic at Hanging Rock (The Criterion Collection)  by Peter Weir was made. The only major plot difference between those two items and the current story is that in the PICNIC version the story takes place on Valentines Day of 1900 and two girls plus a teacher go missing. That book and the movie are also highly recommended.

Later in this story the girls get into a lively discussion about whether ghosts really exist, and if they do, can they live outdoors or must they be confined to interiors. The relevance of this doesn't become important until near the end of the book, so I won't spoil it for you, but do pay attention to who says what about it. Here it differs from the PICNIC book version.

Kindle Customer
5.0 out of 5 stars "Into the beautiful garden."
Reviewed in the United States on 17 August 2013
Verified Purchase
The best stories of Australia are anchored with the Aborigine creation story of the Dreaming World. This book shares that quality of events and thoughts born "themselves out of the insides of the Earth." Eleven little girls are led by their teacher, Miss Renshaw, on an outing into the gardens. To Cubby, it seems, "Perhaps there were no gardens- there was nothing but a wide, weightless plain of terrible light and freedom." Today a man has been hung for running from duty in Vietnam. They are led by their teacher to meet a conscientious objector, Morgan. Morgan is a beautiful poet and leads them to a secret cave to see the paintings from the Dreaming Times. The little girls run away from the darkness to wait for their teacher, who never returns.

While this book invokes the misty edges of fairy land, it is in no way a child's story. In fact it is the story of the slow emergence of the woman from a child. One can read the prose at its lovely surface presentation, or be drawn to the darker symbolism of life emerging from the end of other realities. The escape from the dark, primal cave itself has marked the little girls forever, and that symbolism remains universal in the world's symbolism. In a difficult task, the author successfully portrays very young girls in distinct and dimensional terms. The first part of this book returns us seamlessly to that time when reality is clearly distinct from the world of adults, and their actions are clouded in in their own purpose. This book is a little pearl of that time, set in the that magical world of the continent that seems to hold some extra charge.
Read more
Report abuse

Cinnamon Burke
3.0 out of 5 stars Lovely writing, little story.
Reviewed in the United States on 21 June 2015
Verified Purchase
The book is beautifully written, but the story is just plain odd. The schoolgirls keep the
teacher's secret when she disappears on a field trip, but did she really disappear? She may have
eloped with the gardener, or been murdered. Maybe she returns years later on Remembrance Day,
or maybe not.
Read more
Report abuse

AB
3.0 out of 5 stars Not a classic
Reviewed in the United States on 23 May 2018
Verified Purchase
I had hoped this short novel would be as touching as Picnic st Hanging Rock; it's not. Some lovely writing and visual created in sections but the overall story line was unsatisfyingly weak in my opinion.
Read more
Report abuse

Nicola Taylor
5.0 out of 5 stars Inter-textual masterpiece
Reviewed in the United States on 1 September 2015
Verified Purchase
The inter-textual references are wonderful: hanging rock, the getting of wisdom, Tennyson, Wordsworth (to name but a few), Corinthians, references to Blackman's paintings in the titles of every chapter, and her historical embedding in news events of the times (1967 and 1975). Adults who remember these events will enjoy this as much as children
Read more
Report abuse
See all reviews
Report an issue
Does this item contain inappropriate content?
Report
Do you believe that this item violates a copyright?
Report
Does this item contain quality or formatting issues?
Report