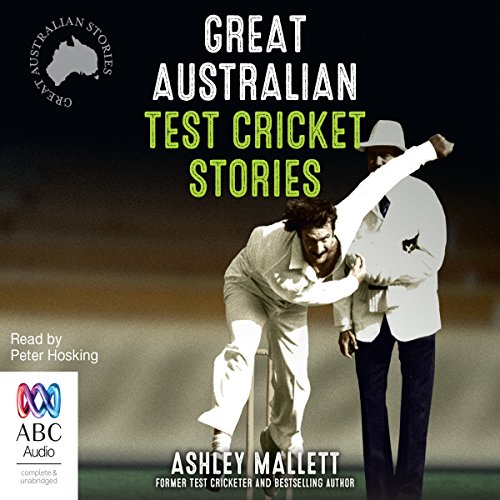 An entertaining collection of insider yarns by an Aussie Test cricket legend.

'In the Test arena, Dennis Lillee was never beaten. West Indian champion Viv Richards had taken the sword to all the international bowlers of his era. But when he came up against Lillee, it was a heavyweight fight between unrelenting combatants. Their contests were always take-no-prisoners affairs.'

A bowler himself, author Ashley Mallett played 38 Tests during the heyday of Australian cricket in the 1970s and 1980s and has been hailed as one of Australia's best spinners. His diving-left-handed grab in the gully to dismiss Colin Cowdrey off Lillee at Adelaide in the explosive 1974-75 Ashes summer was a catch for the ages.

Now Mallett shares his vast knowledge of the game and its heroes in Great Australian Test Cricket Stories, a collection of fascinating cricket yarns that spans centuries and continents. Stories of famous contests and clashes sit beside personal anecdotes as well as insights and opinion that only an elite cricketer could provide. All the greats get a guernsey, from Victor Trumper to Keith Miller, Don Bradman, Boycott, Benaud, Border and Warne, in this engrossing history for fans of the game.

Read more
©2017 Ashley Mallett (P)2017 Bolinda Publishing Pty Ltd
Previous page
Next page
Learn more about membership
By completing your purchase, you agree to Audible’s Conditions Of Use and Privacy Notice.
Sold and delivered by Audible, an Amazon company

4.0 out of 5 stars
4 out of 5
5 global ratings
How are ratings calculated?
To calculate the overall star rating and percentage breakdown by star, we don’t use a simple average. Instead, our system considers things like how recent a review is and if the reviewer bought the item on Amazon. It also analyses reviews to verify trustworthiness.

There are 0 customer reviews and 5 customer ratings.