Share
Got a mobile device?
You’ve got a Kindle. 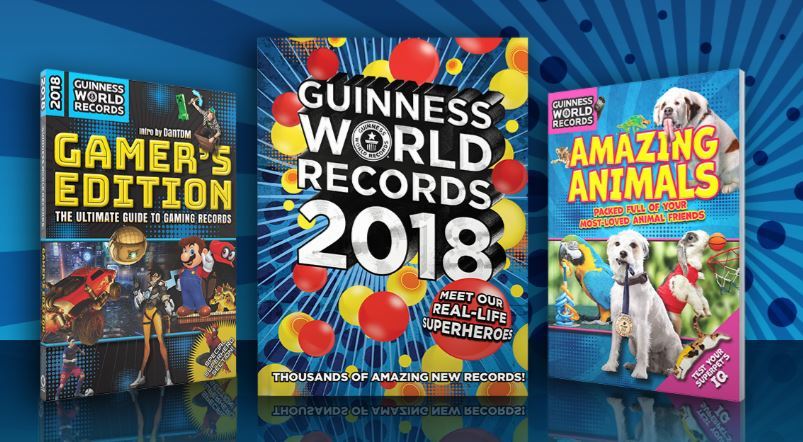 by Guinness World Records (Author)
4.8 out of 5 stars 1,473 ratings
See all formats and editions
Sorry, there was a problem loading this page. Try again.

Global pandemics and lockdowns haven't stopped record breakers from achieving spectacular things: indeed, they've given many people the chance to focus on their ambitions and attain goals beyond their expectations. As ever, Guinness World Records is there to document and ratify these remarkable accomplishments, and our fully updated 2022 edition is a celebration of the tenacity and determination of the human race.
The changing pace of the last year has also given us the opportunity to take stock of our planet and explore the current state of the environment, as seen through our unique record-breaking lens. So, join us as we take a deep dive into GWR 2022...
· Understand the challenges being faced by our planet because of climate change and find out what's being done to reverse the decline and build a better future.
· Venture into the natural world for thrilling encounters with the most extreme plants and animals.
· Meet the people breaking records with their incredible bodies and exceptional minds.
· Discover the stats, facts and figures behind the world's most popular videogames, movies, TV shows and media channels.
· Celebrate the greatest sporting achievements, the most daring adventurers and the latest technological developments.
Plus, we've reached out to some of the young people who refuse to let their age be a barrier to success. What are they doing to change their world? What inspires them to be best? And what can you learn from them if you want to get your own name in the record books? Find out in Guinness World Records 2022.

Welcome to the fully revised and updated Guinness World Records 2022 - the second installment in our collectible series with award-winning illustrator Rod Hunt! This year, we are shining the spotlight on one of the most important issues of our time: the environment. Our records lend themselves to this hot topic as they can provide a snapshot of its many complex aspects - the good, the bad and the ugly. We also want to encourage readers to put their own record-breaking to good - so don't just Discover Your World, Change Your World!

Welcome to the fully revised and updated Guinness World Records 2022. Despite lockdowns and quarantines, the determination to break records hasn't diminished one bit. So, as ever, we've been inundated with thousands of incredible, awe-inspiring achievements to choose from.

Welcome to the fully revised and updated Guinness World Records 2022. Despite lockdowns and quarantines, the determination to break records hasn't diminished one bit. So, as ever, we've been inundated with thousands of incredible, awe-inspiring achievements to choose from.

In 1951, Sir Hugh Beaver, the then managing director of the Guinness Brewery, went on a shooting party and became involved in an argument. Which was the fastest game bird in Europe - the golden plover or the grouse? He realized then that a book supplying the answers to this sort of question might prove popular. He was right!

Sir Hugh's idea became reality when Norris and Ross McWhirter, who had been running a fact-finding agency in London, were commissioned to compile what became The Guinness Book of Records. The first edition was bound on August 27, 1955, and went to the top of the British bestseller lists by Christmas that year.

Since then, Guinness World Records™ has become a household name and the global leader in world records. No other enterprise collects, confirms, accredits and presents world record data with the same investment in comprehensiveness and authenticity.

Read more
Tell the Publisher!
I’d like to read this book on Kindle

Guinness World Records also provides customised consultancy services for some of the world’s top brands and agencies to help place record breaking at the heart of their marketing campaigns, employee-engagement programmes, and live and experiential events.

4.8 out of 5 stars
4.8 out of 5
1,473 global ratings
How are ratings calculated?
To calculate the overall star rating and percentage breakdown by star, we don’t use a simple average. Instead, our system considers things like how recent a review is and if the reviewer bought the item on Amazon. It also analyses reviews to verify trustworthiness.

Miss Chris
5.0 out of 5 stars Fabulous Price
Reviewed in Australia on 23 November 2021
Verified Purchase
Book arrived the next day…..as described……great price…..you won’t beat this price, so get it while you can…great coffee table book to pick up, read some astonishing records, put down again until next time…...Thank You..
Read more
One person found this helpful
Helpful
Report abuse

kevin tyndall
5.0 out of 5 stars Great read not too detailed but gives enough information to make us look further.
Reviewed in Australia on 26 January 2022
Verified Purchase
GWoR 2022 keeping up with the times adding new and interesting subjects,
Read more
Helpful
Report abuse

Objectivist
1.0 out of 5 stars Propaganda
Reviewed in Australia on 23 November 2021
Now just another propaganda outlet - avoid. Another institution has been destroyed.
Read more
Helpful
Report abuse
See all reviews

Mr B Honest
5.0 out of 5 stars Amazing!
Reviewed in the United Kingdom on 18 December 2021
Verified Purchase
World records galore.

...Did you know the Tories held the most cheese and wine "meetings" of any political party globally last year! Astonishing...

Mrs M P Browne
5.0 out of 5 stars Ever popular with all ages
Reviewed in the United Kingdom on 12 October 2021
Verified Purchase
Always enjoyed by readers of all ages especially boys in the 8 to 14 years.
Read more
11 people found this helpful
Report abuse

Christina
5.0 out of 5 stars Buy every year for Christmas for my son
Reviewed in the United Kingdom on 4 December 2021
Verified Purchase
Lovely bright and colourful edition this year, with great quality photos as usual. It has been a Christmas tradition for the past ten years to buy him one as a stocking filler and he absolutely loves it, as I'm sure he will this year! The price has steadily increased over the years but so has inflation, so it is still a bargain for a hardback!
Read more
4 people found this helpful
Report abuse

rbmusicman/and/movie-fan'
5.0 out of 5 stars A WINNER FOR THOSE THAT SEEK ACHIEVEMENT FACTS
Reviewed in the United Kingdom on 19 November 2021
Verified Purchase
A book that's sure to delight those seeking facts and figures and great achievements down
the years and of course the past 12 months or so, a book that will fascinate its reader for
many happy hours., broadening both knowledge and conversation

j.todd
5.0 out of 5 stars Very knowledgable
Reviewed in the United Kingdom on 7 November 2021
Verified Purchase
I've bought these for my 26 year old son since he was about 5. He doesn't get much time to read but he always finds time to read through the Guinness Book of Records.
Read more
4 people found this helpful
Report abuse
See all reviews
Back to top
Get to Know Us
Make Money with Us
Let Us Help You
And don't forget:
© 1996-2022, Amazon.com, Inc. or its affiliates