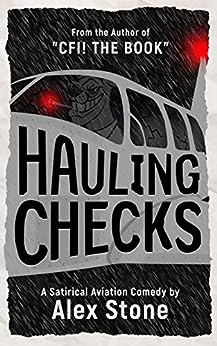 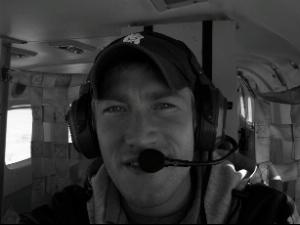 by Alex Stone (Author) Format: Kindle Edition
See all formats and editions
Sorry, there was a problem loading this page. Try again.
I’m a cargo pilot. In the industry, I’m known as a “Freight Dog.” I fly canceled checks and other types of high-value cargo around the country, mostly at night, in airplanes that are older than I am. Flying freight—or “work” as we call it—in small, twin-engine aircraft is a lesser known side of the aviation world. Our day starts when banker’s hours end. Thousands of flights move millions of pounds of work from city to city every night while the rest of the country is asleep.

We’re out there in the freezing rain getting de-iced when you’re laying down for bed. We’re sweeping the snow off our wings with a broom at three in the morning. That horrible thunderstorm you heard last night while you were sleeping, we were flying through it. The fog you woke up to in the early morning hours, we were landing in it.

Hauling Checks is a comedy about the darker side of aviation. A cast of degenerate pilots, who work for a shady night time air cargo operation, take you on a flight through the unfriendly skies. The pilots abuse every Reg in the book in their quest to make deadlines for their high value cargo. As the company falls on hard times, management resorts to questionable measures to save the failing airline.

Alex Stone grew up in Munster, Indiana. He's been flying since age fourteen and received a Bachelor's Degree in Aviation Science from Western Michigan University. He has worked as a flight instructor and was a "Freight Dog" in the air cargo industry for seven years. This is his first novel. --This text refers to the paperback edition.

Alex Stone grew up in Munster, Indiana. He’s been flying since age fourteen and received a Bachelors Degree in Aviation Science from Western Michigan University. He has worked as a flight instructor and was a “Freight Dog” in the air cargo industry for seven years. In 2009 he published his first novel "Hauling Checks" and in 2018 he published his second novel "CFI! The Book."

3.9 out of 5 stars
3.9 out of 5
216 global ratings
How are ratings calculated?
To calculate the overall star rating and percentage breakdown by star, we don’t use a simple average. Instead, our system considers things like how recent a review is and if the reviewer bought the item on Amazon. It also analyses reviews to verify trustworthiness.

Grahame Underwood
5.0 out of 5 stars Unbelievably good
Reviewed in the United Kingdom on 14 November 2013
Verified Purchase
The unbelievable bit refers to the irresponsible, cowboy, daring, improbable and hilarious exploits of a crew on a small airline delivering paperwork overnight for banks, notwithstanding weather, aircraft serviceability, fuel, regulations, crew qualifications or the imminent bankruptcy of the airline. The author makes the unbelievable believable though and the book is a really entertaining and dramatic romp through the skies. He clearly knows what he is writing about and I enjoyed it immensely. Fortunately, there were no passengers (apart from the totally incompetent copilot).

I look forward to another book from Alex Stone, but I doubt he can repeat the chaos of this one!

charisma G-AIGT, G-ARRH, G-DMCS.
4.0 out of 5 stars If you want to read about real flying, move on.
Reviewed in the United Kingdom on 12 October 2021
Verified Purchase
I started to read and enjoy but I realised that even the fiction looked that it could and would never happen.
Read more
Report abuse

Amazon Customer
1.0 out of 5 stars A horrible book that shows a disgusting lack of respect for aviation safety
Reviewed in Canada on 3 January 2022
Verified Purchase
I didn't get very far in this book before quitting. It's clearly not written for pilots.

Aviation can be dangerous. Pilots are trained from day one to learn safe procedures for flying an airplane. In my opinion, its not at all funny to act like an idiot in an airplane.
Read more
Report abuse

Vyshnavi T S
4.0 out of 5 stars An eye-opener for first time aviation readers
Reviewed in India on 3 April 2019
Verified Purchase
Oh My God! Were do I even begin? This book is just a major eye-opener to the areas we rarely pay heed to. I mean who even bothered to take a moment to think about the hardships the cargo pilots go through apart from themselves and probably their friends and families? I mean, Oh My God! This book had me thinking hard and long. These poor people ! Really? Do people actually live like this? Dyamn son! (Pardon my lack of grace!) Of course, I am sure parts of this book would be exaggerated, but still. Really?

The whole story is written from the perspective of a cargo pilot who works in a seriously debilitated aircraft company. There is a lot of dark humor in this book that's more dark than humorous. The lead establishes himself pretty clearly by describing himself right at the beginning on the book and you know that the tone is set and know in which direction the book is going, or so you think.

This really ill managed company have severely ill maintained planes that the pilots are forced to fly or rather are convinced to believe that they are in a flyable condition and kudos to these pilots for taking it up in the sky , because I would never have the nerve to do that! There were so many things about this airline that was done right wrong, I mean lesser companies have standard operating procedures, subject knowledge and sensible staff, but this place was crammed with under-qualified (and unqualified ) staff, no organisation structure and horrible plane maintenance mechanic. I am all about living life on the edge, but a life like this is just violations of human rights. The crazy shifts and work timings and the effects it has one's personal life is truly bothersome. This horrible boss with no respect to anything but saving money even at the cost of the employees heath both physically and mentally. The random screw ups with the plane, the staff or even the packages will truly leave you open-mouthed. The relief I had when he quits the job and takes the final flight. But obviously the story has to end with a dramatic effect, and dramatic it was! The revelations were such major stuff that were all hiding in plane sight, but still came as a shocker when disclosed.

All thorough out the book, I realized that the lead never had an opportunity to have any kind of an enriching conversation. His weekends were lifeless and filled with troubles. He was truly going through some major life crisis and at several times he let himself be taken for granted, but then you think , hey , what could he have really done? It is not having a backbone , or rather a lack thereof, but it is about the situation you are stuck in and no external exposure to even explore other options because of is working schedule and circle of friends.

One the plus side, I learnt a lot of new pilot terminologies and felt better about my life, so thanks Alex for that ! I cannot imagine how anyone could live a life like this and yet, there are people living like this and I truly want to walk up to them and pat their backs.

Alex stone is a wonderful author who can find humor even in the darkest and the most depressing situations in life and this book shows you that. Even if you want to be depressed for the people in this book, you just end up laughing at their helplessness. The Hauling Checks was a truly engaging book and I'd like to see what is in store with the next book, although I can't imagine what could beat this one with it's major ups and downs.
Read more
Report abuse

Finola
5.0 out of 5 stars I've been there and done that.
Reviewed in the United States on 30 May 2020
Verified Purchase
I enjoyed reading about the difficult times that pilots have working for slave driving, uncaring, companies.
The book is very factual, and he calls a spade a spade, and, unless you've actually walked the walk you will never know what crap goes on in the night sky when everyone else is asleep and you are being lulled to sleep, by the drone of your turbine engines and complete lack of sleep. To make matters worse one crew member may be sleeping on top of the cargo at that time and there's no way the call for help. So, in that case, you turn the volume on your radio as high as possible so that when air traffic control calls to tell you that you're off course you will wake up with a start and mumble, ' Jet Air 220 is correcting back to the right'. There, a disaster has been averted.
The writer, in my opinion, was very harsh on his copilots. Being that he was flight instructor he should know better and cut them some slack. Otherwise, I enjoyed the book and I actually laughed in places, because I know exactly the airports he was writing about since I had been there myself. One of those airports had a notice, as I recall, that said: 'watch out, on the landing, for alligators, wild boar's, snakes, deer, on the runway. The book is well worth the money and you can decide for yourself whether you would like to carry cargo or checks around her very little pay; hamburger flipping pay to be exact.
Read more
6 people found this helpful
Report abuse
See all reviews
Report an issue
Does this item contain inappropriate content?
Report
Do you believe that this item violates a copyright?
Report
Does this item contain quality or formatting issues?
Report