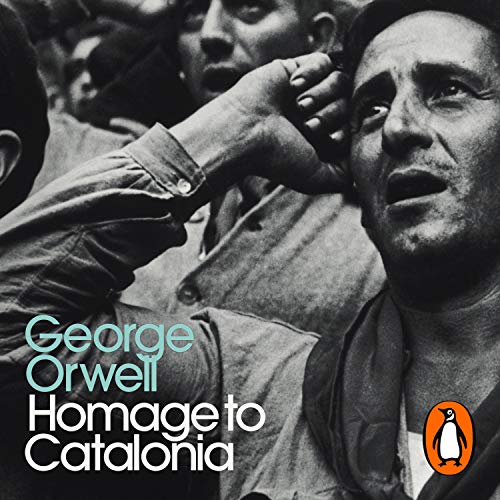 'Every line of serious work that I have written since 1936 has been written, directly or indirectly, against totalitarianism and for democratic Socialism as I understand it'.

Thus wrote Orwell following his experiences as a militiaman in the Spanish Civil War, chronicled in Homage to Catalonia. Here he brings to bear all the force of his humanity, passion and clarity, describing with bitter intensity the bright hopes and cynical betrayals of that chaotic episode: the revolutionary euphoria of Barcelona, the courage of ordinary Spanish men and women he fought alongside, the terror and confusion of the front, his near-fatal bullet wound and the vicious treachery of his supposed allies.

A firsthand account of the brutal conditions of the Spanish Civil War, George Orwell's Homage to Catalonia includes an introduction by Julian Symons in Penguin Modern Classics.

Read more
©2020 George Orwell (P)2020 Penguin Audio
Previous page
Next page
Final days - Don't miss out!
Learn more about membership
By completing your purchase, you agree to Audible’s Conditions Of Use and Privacy Notice.
Sold and delivered by Audible, an Amazon company

4.5 out of 5 stars
4.5 out of 5
2,235 global ratings
How are ratings calculated?
To calculate the overall star rating and percentage breakdown by star, we don’t use a simple average. Instead, our system considers things like how recent a review is and if the reviewer bought the item on Amazon. It also analyses reviews to verify trustworthiness.

the superhuman crew
3.0 out of 5 stars Homage to Catatonia - by George Oilwell
Reviewed in Australia on 23 July 2020
Verified Purchase
I was looking forward to reading this book as I enjoy eating cheese. But I discovered that Oilwell mostly sticks to topic such as the Spanish Civil War, communism v fascism etc and hardly ever touches on the subject of cheese. A great disappointment.
Read more
Helpful
Report abuse

James
5.0 out of 5 stars My Favourite Book by Orwell
Reviewed in Australia on 25 December 2018
Verified Purchase
Always recommend this one to friends. Holds up as a book and insight into the shadowed Spanish civil War. It was the book that made me want to read more of his work.
Read more
Helpful
Report abuse

Lorenzo Matteoli
5.0 out of 5 stars master pièce
Reviewed in Australia on 29 September 2015
The account Of the Spanish War by George Orwell is a book that should be mandatory reading for the Stalinist "comrades" a document of the bloody hands of the communist party never to be forgotten. We will never forget the generous socialist voluntary fighters murdered by Stalin's hit men. Unforgivable historic crime.
Read more
2 people found this helpful
Helpful
Report abuse
See all reviews

Dave D
4.0 out of 5 stars Sums Up The Left Wing of Politics!
Reviewed in the United Kingdom on 13 September 2017
Verified Purchase
I had to buy this again. I was 21 when I read this. Now, I'm 45. I'm a life long socialist and this book sums up perfectly how the left always fights itself more than the opposition. This is the book I always quote whenever the left turns in on itself (which is always!.) "My cause is more important than your cause etc." is pretty much the left. 70 odd years later, it's still the same lol. UK Labour party..are you watching! Classic book!
Read more
56 people found this helpful
Report abuse

JRF
5.0 out of 5 stars Unsparing look at the realities of war
Reviewed in the United Kingdom on 6 July 2017
Verified Purchase
If you've read "1984" and "Animal Farm", and want more of the same author's superb prose, this book is worth your time. Non-fiction like "The Road to Wigan Pier", unlike that book this one focuses on a struggle outside Britain - the Spanish Civil War, a conflict that nowadays tends to be relegated to a footnote in history. So if you are unfamiliar with the events and participating factions, let George Orwell be your guide. His descriptions of his experiences (including a serious neck wound) are intentionally unsparing, and designed to strip away any glamour attached to war and highllight both the periodic brutality and routine squalor. Highly recommended.
Read more
31 people found this helpful
Report abuse

Brownbear101
4.0 out of 5 stars Says Something Universal About Political Change and Warfare
Reviewed in the United Kingdom on 28 August 2012
Verified Purchase
Orwell had six rules for good writing:

Never use a metaphor, simile or other figure of speech that you are used to seeing in print
Never use a long word where a short one will do
If it is possible to cut a word out, always cut it out.
Never use the passive where you can use the active
Never use a foreign phrase, a scientific word or a jargon word if you can think of an everyday English equivalent
Break any of these rules sooner than say anything outright barbarous

These rules pretty much describe Orwell's own writing style, which is simple and straightforward, yet elegant and engaging. He was a man who lived a very full and somewhat eccentric life, giving up a career in the Burmese police force to wander around Britain as a Tramp and to live in poverty in Paris. He was very connected to working people and so understandably was drawn to the socialist side against Franco's Fascists in the Spanish Civil War (1936-9).

This is a remarkably detailed account of an ordinary foot soldier's life in wartime - comparable to Robert Graves' `Goodbye to All That' about his time in the trenches in WW1. Orwell doesn't have the big picture of how the war is going or what the strategy is but can see the hopeless organisation and pitiful logistics of the Socialists. He's cold, hungry, ill clothed and badly armed but it's remarkable how cheerful he and his comrades remain. I would guess that this is an almost universal account of the nonsense of war from a soldier's point of view.

In the second part of the book he goes on leave to Barcelona and gives an account of the complex political rivalry between the socialist factions. As an account of the home front this is less successful as the political infighting seems ridiculously petty and un-affecting compared to the soldier's life. Eventually however the group to which Orwell belongs (POUM) losses the political fight and becomes a banned organisation so that he has to flee Spain to avoid arrest.

In many ways this is bang up-to-date - I can well believe that anti-government groups in, say, the Arab spring are very much like Orwell's socialists - fervent for their cause, but badly equipped and divided politically. To that extent this is a very modern book that has some universal truths about revolution and political change and which is well worth reading.
Read more
79 people found this helpful
Report abuse

John Murphy
5.0 out of 5 stars Great insight to a war that I had thought was one dimensional
Reviewed in the United Kingdom on 28 September 2021
Verified Purchase
Having previously thought the Spanish civil war was purely a right against fascism but Orwell's considered account explains the war within the war between the anti fascist forces in a frank and honest way. His account underscores the brutality and camaraderie of war but also the boredom suffered at the front whilst creating images of the environment he was fighting in. As all good reporters Orwell asks readers to look at accounts other than his own to get a balanced view and has inspired further reading. He also criticised writers who commented on the infighting without having be an in Spain to witness directly what had happened. Very interesting read
Read more
2 people found this helpful
Report abuse

angryoldman
4.0 out of 5 stars n
Reviewed in the United Kingdom on 18 July 2017
Verified Purchase
Classic history of Spanish Civil War written before it finished. . It makes it clear that when we think of it as facist versus Communist we have got it wrong. At this distance and without a background study the political complexities are difficult to follow. BUT the story of one man caught up in revolution and the day to day events of life at the front line make engrossing reading and this edition has taken the two chapters explaining the political complexities and turned them into appendices.
In the light of the recent events at the G6 in Germany its worth being reminded that the Anarchists, who are not Communists; were at the heart of the Spanish Government.
Read more
11 people found this helpful
Report abuse
See all reviews