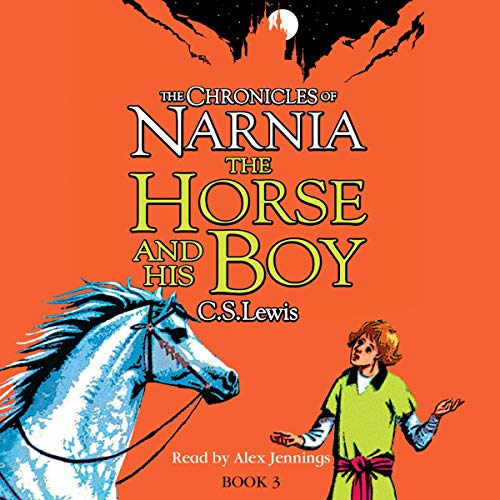 The Horse and His Boy: The Chronicles of Narnia, Book 3

Alex Jennings (Narrator), C. S. Lewis (Author), HarperCollins Publishers Limited (Publisher) & 0 more
4.7 out of 5 stars 1,634 ratings
#1 Best Seller in Religious Fiction for Children
See all formats and editions
Sorry, there was a problem loading this page. Try again.
Desperate to escape a harsh and narrow regime, two runaways unwittingly flee headlong into the centre of a terrible battle. This first sequel to The Lion, the Witch and the Wardrobe includes all the hallmarks of its famous predecessor, though this time the fate of Narnia is wound up in the lives of its own children, and a talking horse!

This was the fifth book written in The Chronicles of Narnia. It now stands as the third book in the series.

Read more
©1950, 1978 C.S. Lewis Pte. Ltd (P)2005 HarperCollins UK
Previous page
Next page
Learn more about membership
By completing your purchase, you agree to Audible’s Conditions Of Use and Privacy Notice.
Sold and delivered by Audible, an Amazon company

4.7 out of 5 stars
4.7 out of 5
1,634 global ratings
How are ratings calculated?
To calculate the overall star rating and percentage breakdown by star, we don’t use a simple average. Instead, our system considers things like how recent a review is and if the reviewer bought the item on Amazon. It also analyses reviews to verify trustworthiness.

MikeC
TOP 500 REVIEWER
4.0 out of 5 stars Enjoyable - if problematic - story about finding home.
Reviewed in Australia on 15 January 2022
Verified Purchase
While set in the world of Narnia, this book has no connection to The Lion, The Witch and The Wardrobe, beyond a couple of cameos by King Edmund, Queen Susan and Queen Lucy. It tells the story of a young foundling named Shasta, raised in a miserable fishing village far to the south of Narnia. Here he meets a talking horse, Bree, who has only one goal. To escape his Master and return home to the freedom of Narnia. So, off the two of them go on a cross country mission to find a home.

It's an enjoyable enough story about home and finding where you belong. But it has quite a negative streak running through it. The other kingdom is some sort of middle eastern based Muslim community, and the characters never waste a moment pushing the superiority of Narnia. The story has a fair amount of casual racism thrown about and, I'll admit the ending left me with a terrible taste in my mouth.
Read more
Helpful
Report abuse

salome
5.0 out of 5 stars Classic
Reviewed in Australia on 18 April 2019
Verified Purchase
Classic children's book that as an adult I enjoy. Best book of the series in my opinion. Do read it
Read more
Helpful
Report abuse

Rod Baxter
TOP 1000 REVIEWER
3.0 out of 5 stars ,The Prince and the pauper?
Reviewed in Australia on 11 November 2014
Verified Purchase
A good story, is just that. A good story. A story that has a chase in it, has to be a good story. Apart from a few predictable plot lines this was a good story. Sometimes it is great to put on a comfortable pair of jeans.
Read more
Helpful
Report abuse

Kindle Customer
5.0 out of 5 stars the magician's nephew
Reviewed in Australia on 24 May 2019
so magical and great i recomend it completely it has lots of great fantacy and the witch is really creapy I absoluly love fledge and polly she is cool
Read more
Helpful
Report abuse
See all reviews

J. Ang
4.0 out of 5 stars Faith, Friendshop and Courage
Reviewed in the United Kingdom on 4 September 2013
Verified Purchase
I enjoyed the Narnia Chronicles as a child many, many years ago, and still find the series as magical today. I revisited the first two books in the series (at least in the order that Harper Collins recommends) and only picked up this third book.

For readers who have already read the two books, especially "The Lion, the Witch and the Wardrobe" (arguably the most popular of the series), they would already have been familiar with how the four Pevensie children stumbled into Narnia through an old Wardrobe in the English countryside during the Blitz of WWII, discovering their destinies as the rightful Kings and Queens of Narnia, after overthrowing the White Witch, who had been keeping the free creatures under her oppressive rule.

While in that book, the real world connects with Narnia, in "The Horse and His Boy", the Lewis sets his story squarely in the fantasy universe. It centres on Shasta, an adopted son/slave of a fisherman from Calormen, one of the neighbouring lands of Narnia, who escapes with a talking horse in search of the free land of Narnia, when he discovers he was about to be sold to a Calormene nobleman. In their journey, they come across a young Calormene aristocrat Aravis, who was also escaping on her mare from an arranged marriage.

Without being preachy, Lewis doles out nuggets of wisdom about pride, courage, and what it means to be a friend. When Bree feels discouraged about entering Narnia, an old hermit who helps them escape their enemies tells him: "Of course you were braver and cleverer than (the rest of the regular horses). You could hardly help being that. It doesn't follow that you'll be anyone very special in Narnia. But as long as you know you're nobody special, you'll be a very decent sort of Horse, on the whole, and taking one thing with another". What a gentle yet firm way to tell someone that with a good head on your shoulders, you'll do fine, rather than thinking the world of yourself. A good lesson for both adults and kids alike.
Read more
4 people found this helpful
Report abuse

Gregory Justice
4.0 out of 5 stars Slow start but great finish
Reviewed in the United Kingdom on 29 August 2018
Verified Purchase
The story is slow to begin with and does take a little while to build momentum however it is worth the wait as the second half of the book is filled with excitement. This book has a very different feel to it than the previous two in the series which makes for an interesting read and continuation of the Chronicles of Narnia. The only disappointment I have is that the 4 brothers and sisters weren't in it much and Peter not at all. The book has left me feeling happy and wanting more, a recommended read.
Read more
2 people found this helpful
Report abuse

MJA
5.0 out of 5 stars Wonderful
Reviewed in the United Kingdom on 2 September 2015
Verified Purchase
I am reading these books in published order so this was the fifth book I read in the series. This is the first book that I have read in my reading order were I have had to think back to previous happenings in the earlier books. Things in this book happened after Prince Caspian. However I didn't get confused or mixed up between the two and it was easy to read still. I actually enjoyed thinking back to previous books and linking a few things up. Like that Peter is mentioned in the books only in conversation not as himself because he is away fighting the giants.
I really enjoyed this book just as much as the others and can't wait to read the next, which is the magicians nephew. The first book to read in the other rather than published!! Was a brilliant adventure and was a bit of everything in it.
Please read. Thank you C.S Lewis!
Read more
3 people found this helpful
Report abuse

The Blackeys
5.0 out of 5 stars A journey happens in the heart as well as on the horse
Reviewed in the United Kingdom on 21 February 2020
Verified Purchase
What a lovely story, Shasta and Bree are two characters which travel a great way together. But the story of what they and their friends learn on their journey is much more important than the journey itself.

Excellent story and a great read. What a joy to read such a well crafted tale.
Read more
Report abuse

Amanda Hollyer
4.0 out of 5 stars A spirited tale
Reviewed in the United Kingdom on 29 December 2012
Verified Purchase
This is the story of a Narnian talking horse and his boy, Shasta, who decide to run away from the rather stereotyped southern land of Calormen. This is largely tempered by the dry tone in which it is written, emphasised by the even drier tone of the Tisroc (may he live forever) in criticism of that particular epithet. They encounter a girl and her horse who are going the same way; all are freed by going north into Narnia and Archenland and, through various encounters with the Lion, learn much about themselves and what they must do. This is a lively tale, with a freshness that allows for the changes in the fifty years since it was written; it fairly bowls along, with a few moral episodes along the way.
Read more
One person found this helpful
Report abuse
See all reviews