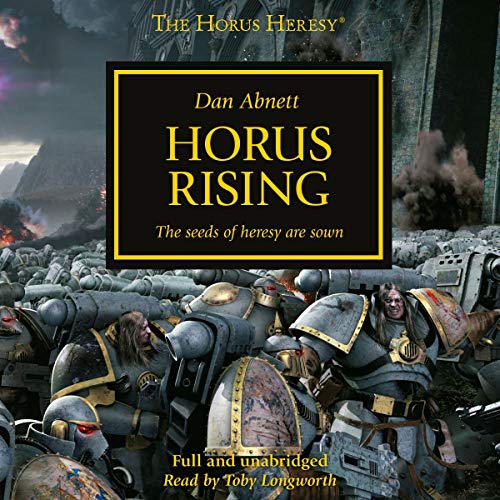 It is the 31st millennium. Under the benevolent leadership of the Immortal Emperor, the Imperium of Man hasstretched out across the galaxy.

It is a golden age of discovery and conquest. But now, on the eve of victory, the Emperor leaves the front lines, entrusting the great crusade to his favourite son, Horus. Promoted to Warmaster, can the idealistic Horus carry out the Emperor's grand plan, or will this promotion sow the seeds of heresy amongst his brothers?

Switch between reading the Kindle book & listening to the Audible narration with Whispersync for Voice.
Get the Audible audiobook for the reduced price of $4.49 after you buy the Kindle book.
Learn more about membership
By completing your purchase, you agree to Audible’s Conditions Of Use and Privacy Notice.
Sold and delivered by Audible, an Amazon company

4.7 out of 5 stars
4.7 out of 5
2,366 global ratings
How are ratings calculated?
To calculate the overall star rating and percentage breakdown by star, we don’t use a simple average. Instead, our system considers things like how recent a review is and if the reviewer bought the item on Amazon. It also analyses reviews to verify trustworthiness.

Nanslayer
5.0 out of 5 stars Quality
Reviewed in Australia on 24 February 2021
Verified Purchase
- Has you on the edge of your seat!
- Rollercoaster of emotions, would definitely recommend to anyone interested in 40K
Read more
Helpful
Report abuse
See all reviews

M. Brookes
4.0 out of 5 stars Meet Horus before the fall
Reviewed in the United Kingdom on 29 September 2016
Verified Purchase
I used to be very into my Warhammer 40K with my Space Marine army, and back then the Horus Heresy was a footnote in history. I've always been a fan of the setting, and while I don't play the games anymore, I do still enjoy reading stories. This is the first book in the long running 'Horus Heresy' series, and details the events of 10,000 years before the game.

While the book is set far in history from the games' point of view, as these are the precursors to the famous space marines it didn't take long to familiarise myself with the setting. If you're new to the universe then this probably isn't the best book to start with, as there's little introduction to the mythos.

The book's setting before the more formal marine chapters known later allow a greater flexibility with the marine characters as they conduct their great crusade to stamp the Imperium's seal across the galaxy. They're still superhuman killing machines, but there are nuances to their cha=racters which help offset the bleakness of the world they inhabit. Of particular interest if Horus, his fate is known to those familiar with the mythos, and its interesting to see the seeds of his future, and see him before his fall.

That grim future is one of the aspects that attracts me to the 40K universe. It's very over the top, with enemies on all sides, and within if you're not careful. The basic premise is that humanity had once spread across the stars, but contact had been lost, and Earth was now reclaiming the lost colonies. Naturally many resisted, and that's were the book starts with the subjugation of one such world.

As is often the case with these books the action soon involves aliens, and while they're not the most imaginative foes, they are sufficient to provide for some good action. The writer's style works well for the story, it has a sombre formality which matches the nature of the Imperium, but also well paced action for the fighting.

My only real complaint was that the ending feels a bit rushed. I would also have liked to have learned more about the second set of aliens. Overall though, I enjoyed reading it. It portrays the world in a detailed fashion, yet at a steady pace. It also has a few philosophical moments with so solid insights. A good read.
Read more
22 people found this helpful
Report abuse

Words and Chaos
4.0 out of 5 stars A pleasant surprise
Reviewed in the United Kingdom on 29 December 2019
Verified Purchase
Given that nobody is expecting much from a book set in the Warhammer 40k universe outside of an excuse for lengthy descriptions concerning the volume of various explosions and how much viscera attends their detonations, this is a surprise. Warhammer character fluff is full of purile Mary Sue machismo fantasies, and you should avoid it as if it were radioactive waste.

Abnett, however, has a strong command of the mechanics of a story, setting and character even while writing about superhuman war gods who make things explode. A good number of writers who aren't trying to attach a narrative to a bunch of plastic soldiers don't do half as well as this. Expecting the novel equivalent of a Call of Duty campaign, I was pleasantly surprised to read engaging characters, solid pacing that wasn't anchored to the body count per page, dialogue that forgoes the usual cliche bombast, and an all-round enjoyable story.

As far as easy-digest sci-fi goes this is up there at the top.
Read more
6 people found this helpful
Report abuse

David Barnett
4.0 out of 5 stars Heretically good
Reviewed in the United Kingdom on 21 September 2020
Verified Purchase
So here it is, book one in a series of *checks notes* ... more than fifty books chronicling The Event in Warhammer 40k lore. In actual fact it's a multitude of events that starts with this, a book length preamble to more famous events later in the series. That line doesn't really do justice to the great work on offer here however.

Strong characterisation, a plot that decently weaves amongst multiple threads and a superb ability to set whole worlds alive in the imagination. Yeah this is a page turner, one that could've been very workmanlike but instead is a joy to read as all the pieces come together and find their inevitable place.

Now how it reads to someone less well versed in the lore I couldn't say. Indeed the revelations at the end of the finale may not entirely stick the landing if one is unaware of what follows in the almighty lore. That said, such an understanding isn't required for the vast majority of this book and that's quite the balancing act to pull off. Recommended.
Read more
2 people found this helpful
Report abuse

BD Charles
5.0 out of 5 stars Lupercal!
Reviewed in the United Kingdom on 26 April 2017
Verified Purchase
As a first-time reader of WH40K and a newcomer in general to the Warhammer universe, I found this to be a great introduction to the Legion, who the Primarchs and Chapters are and how the relate to the overall theme.

The writing is solid and grim, and shifts from well-paced fight scenes that are vividly imagined to contemplative and introspective dialogue among the characters. You'll probably end up loving the Luna Wolves as your first Space Marine Chapter, as I have, but this only fuels the fire. I suddenly find myself rapt with the theatrical nature of this series, and I'm certainly interested to read about the other Chapters and the Emperor, beloved by all.
Read more
15 people found this helpful
Report abuse

Joe Oak
4.0 out of 5 stars a strong start
Reviewed in the United Kingdom on 12 November 2017
Verified Purchase
At the time of writing, the Horus Heresy series is approaching its 50th book. It would have been hard to predict that, back in 2006 when this was first published. Horus Rising is a strong novel, written by one of the Black Library's best authors, and the standard is high. The characters are believable, their actions and inner worlds fit with our conceptions of them. The plotting and pacing are both punchy and engrossing. This is a good novel, and would probably be enjoyed by anyone who liked military sci-fi. I enjoyed returning to it after years away.
Read more
6 people found this helpful
Report abuse
See all reviews