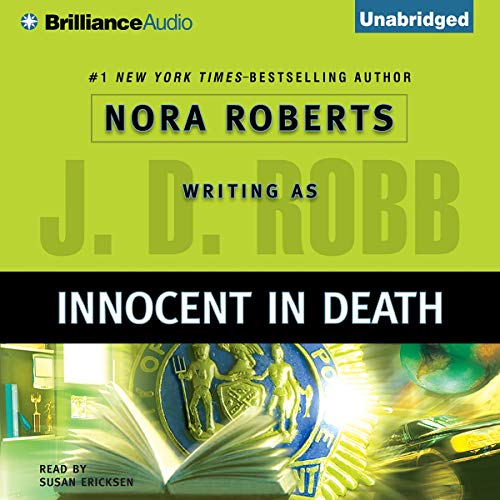 Innocent in Death: In Death, Book 24

Susan Ericksen (Narrator), J. D. Robb (Author), Brilliance Audio (Publisher) & 0 more
4.7 out of 5 stars 2,340 ratings
See all formats and editions
Sorry, there was a problem loading this page. Try again.
The death of history teacher Craig Foster devastated his young wife, who'd sent him off to work that morning with a lovingly packed lunch. It shocked his colleagues at the Upper West Side private school. And as for the 10-year-old girls who found him in his classroom in a pool of bodily fluids, they may have been traumatized for life.

Lieutenant Eve Dallas, of course, is more hardened to murder cases. And this is clearly a murder case. That lovingly packed lunch was tainted with deadly ricin. And Mr. Foster's colleagues, shocked as they may be, have some shocking secrets of their own. It's Eve's job to get a feel for all the potential suspects, and find out why someone would have done this to a man who seemed so inoffensive, so pleasant...so innocent.

Now Magdelana Percell - there's someone Eve can picture as a murder victim. Possibly at Eve's own hands. The slinky blonde - an old flame of her billionaire husband, Roarke, from his days on the wrong side of the law - has turned up in New York, and she's anything but innocent.

Unfortunately, Roarke seems blind to Magdelana's manipulation, but not to her shapely figure and flirtatious ways. And he insists that the occasional lunch or business meeting with her is nothing to worry about...and none of Eve's business.

Eve's so unnerved by the situation that she finds it hard to focus on the Foster case. Still, she'll have to put aside her anger, jealousy, and heartbreak, for a while at least - because another man has just turned up dead, and the case is taking some strange turns and hitting some frustrating dead ends.

Eve knows all too well that innocence can be a façade. Keeping that in mind may help her solve this case at last. But it may also tear apart her marriage.

Switch between reading the Kindle book & listening to the Audible narration with Whispersync for Voice.
Get the Audible audiobook for the reduced price of $4.49 after you buy the Kindle book.
Learn more about membership
By completing your purchase, you agree to Audible’s Conditions Of Use and Privacy Notice.
Sold and delivered by Audible, an Amazon company

4.7 out of 5 stars
4.7 out of 5
2,340 global ratings
How are ratings calculated?
To calculate the overall star rating and percentage breakdown by star, we don’t use a simple average. Instead, our system considers things like how recent a review is and if the reviewer bought the item on Amazon. It also analyses reviews to verify trustworthiness.

Karen
TOP 500 REVIEWER
5.0 out of 5 stars Another Fantastic Read by J D Robb
Reviewed in Australia on 23 May 2019
Verified Purchase
This is one of my favourite in the series. You could read it as a standalone but you wouldn’t enjoy it as much. Eve warned Roarke to be careful but he didn’t listen. The murder was clever but simple and you’ll be blown away by who did it! A great read and I’d recommend this to anyone who loves a great who done it and a romance story. I would recommend that you go back to the beginning and read Naked in Death then the rest of the series it’s well worth it as that way you get to see the characters develop.
Read more
Helpful
Report abuse

Victoria
5.0 out of 5 stars Great read
Reviewed in Australia on 14 July 2020
Verified Purchase
JD you’re brilliant, although it’s a little scary on how you come up with this stuff. I’ve got the next one ready to go
Read more
Helpful
Report abuse

Amazon CustomerPat
5.0 out of 5 stars Another Cracker
Reviewed in Australia on 16 August 2020
Verified Purchase
I wait with bated breath for each new book.
Great characters and plots.
Roll on the next one and the next.
Read more
Helpful
Report abuse

Deborah
5.0 out of 5 stars Nora's a great writer
Reviewed in Australia on 21 November 2018
Verified Purchase
Always a great story with a strong female cop that can kick butt!
Read more
Helpful
Report abuse

Sarah (Feeling Fictional)
4.0 out of 5 stars In Death book 24
Reviewed in the United Kingdom on 13 August 2019
Verified Purchase
In this instalment Eve is tasked with investigating the murder of a popular young teacher at a private school. That's the least of her worries this time though as one of Roarke's old flames is back on the scene and she seems determined to win him back. Eve is usually pretty chilled about Roarke's exes but there is something about Magdelana that puts her back up almost instantly and for the first time she finds herself impossibly jealous and paranoid. Her head tells her Roarke would never betray her trust but her heart is running scared. For once Roarke handles things badly, he doesn't understand her jealousy and is upset by the thought that Eve doesn't trust him. Friction at home has Eve completely off her game and it makes it far harder than normal for her to solve the case.

If you've been following my blog over the last few months you'll know I've been devouring this series and I can't get enough of Eve and Roarke as a couple so it was horrible to see them going through a rough patch in this book. But at the same time I really appreciate that J.D. Robb is still managing to make their relationship fresh and interesting 24 books into a long running series. Roarke can sometimes be too good to be true so it was nice to see him make a mistake for a change even though it left me wanting to smack some sense into him. I was so angry at him for hurting Eve but at the same time I could see why he was annoyed that she didn't seem to trust him. I never doubted them as a couple though, it's obvious they're both crazy about each other and that nobody is ever going to be able to come between them no matter how hard they try.

I have to give a shoutout to Summerset in this review too because there were some fantastic scenes between him and Eve this time around. I love the antagonistic relationship they usually have but I also really like the way that when the chips are down they can actually be quite sweet to each other. I don't want to say too much about the murder in this case but I will say I was shocked and pretty horrified at who the killer was and their motives. This was definitely a surprising case that nearly got past Eve, luckily she got her head back into the game in time to solve the mystery though.
Read more
Report abuse

J. Turner
5.0 out of 5 stars I'd like to give it more than just 5
Reviewed in the United Kingdom on 24 February 2011
Verified Purchase
This has to be my favourite of the 'in death' novels, JD Robb (aka: Nora Roberts) really draws you in with this story of a murdered teacher who was Mr Popular. I did sorta guess whodunnit but that didn't matter as I enjoyed the book so much. The subplot of Eve being off her game because of Roarke's seeming seduction by an old flame was great and I loved the way Summerset came through for Eve - so funny! CAn't wait to read the next 'in death' - not just excellently written but warmly written too, especially where character development is concerned.
Read more
Report abuse

K. Millin
5.0 out of 5 stars A nice teacher killed at work
Reviewed in the United Kingdom on 9 July 2019
Verified Purchase
This time it takes Eve some time to work out the motives and who the killer is. She is distracted at the start by the appearance of a beautiful ex of her husband, Roark, appearing in their lives
Read more
Report abuse

Amazon Customer
5.0 out of 5 stars Really good story
Reviewed in the United Kingdom on 3 February 2020
Verified Purchase
Kept me guessing even as the number of suspects dropped. The relationship between Dallas and Rourke also had me thinking. Added rather than distracting from the main theme.
Read more
Report abuse

Carol Johnson
5.0 out of 5 stars Always a good read
Reviewed in the United Kingdom on 16 February 2022
Verified Purchase
Always like J D Robb. They keep you engrossed till the end. Would always recommend them with no hesitation ever
Read more
Report abuse
See all reviews