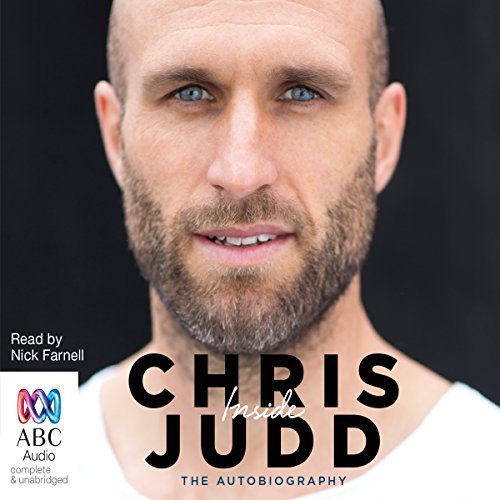 From one of the game's true champions - a man who has captained both the West Coast Eagles and Carlton - comes a revealing, honest and unique autobiography.

A rare and intimate look inside the world of the elite sportsman. Few people know Australian-rules football better than Chris Judd. He's one of the game's out-and-out champions, having captained two of the greatest clubs in the league - the West Coast Eagles and Carlton - and taken the Eagles to premiership victory in 2006. He's won the Brownlow Medal twice, been a dual Leigh Matthews trophy winner, awarded the AFL's MVP twice as voted by the players, and selected as an All Australian six times.

His autobiography is a unique journey into the game, describing with extraordinary candour what it's like to climb to the highest levels, to achieve the ultimate goal of your sport, and to experience the full measure of heartache and failure that inevitably accompany more than a decade of playing at the elite level.

Few sportsmen have shared such intimacy and insight into their world, and the result is a book that's worthy of Chris Judd the player - intelligent, surprising and head and shoulders above its competition.

Switch between reading the Kindle book & listening to the Audible narration with Whispersync for Voice.
Get the Audible audiobook for the reduced price of $5.99 after you buy the Kindle book.
Learn more about membership
By completing your purchase, you agree to Audible’s Conditions Of Use and Privacy Notice.
Sold and delivered by Audible, an Amazon company

4.0 out of 5 stars
4 out of 5
22 global ratings
How are ratings calculated?
To calculate the overall star rating and percentage breakdown by star, we don’t use a simple average. Instead, our system considers things like how recent a review is and if the reviewer bought the item on Amazon. It also analyses reviews to verify trustworthiness.

Ramon E Lemus
5.0 out of 5 stars Thoroughly enjoyed Chris's story
Reviewed in Australia on 3 March 2018
Verified Purchase
Thoroughly enjoyed Chris's story, he is a true practitioner of continuous improvement and it is no surprise how he was such a successful athlete, he cites several great masters of success and translated their knowledge into his area. A growth mindset, indeed. Inspirational to see how a person can apply his mindset to his life and skill, in order to improve himself. There are great examples in this book, for success students looking at linking teachings of the greats applied, to a modern Australian landscape or in life in general, congratulations Chris and your Team.
Read more
Helpful
Report abuse

Larsygirl
5.0 out of 5 stars Not just for football fans
Reviewed in Australia on 10 March 2016
Verified Purchase
Great read - I normally avoid autobiographies (usually there is too much either "poor me" or "how good was I?") but this one is an exception. It was nice to see the footy world from Chris Judd's calm and pragmatic viewpoint. I recommend this book not just for footy players but for anyone who is interested in leadership, goal setting and how to motivate a team. If, like me, you've always been curious about what makes Juddy tick, you wont be disappointed, for an introvert he has reveals much of himself in this book. It is very well written, easy and interesting to read.
Read more
Helpful
Report abuse

Wayne Cumbers
5.0 out of 5 stars Success
Reviewed in Australia on 9 December 2015
Verified Purchase
This is a great read for it's insights in to Chris Judd and the world of an AFL football. Chris address the sacrifices he made entering football, the challenges he faced through his career both on an off the field. What I found interesting was the defining stance Chris takes as he points out underlying issues in the AFL from s footballers perspective. I recommend this book to young players wanting to become an AFL player or anyone who loves the game. I never had much respect for Juddy after he left the Eagles and now I am left feeling guilty for feeling that way.
Read more
Helpful
Report abuse

PT
5.0 out of 5 stars Great Man, Great Read
Reviewed in Australia on 2 November 2015
Verified Purchase
Juddy was an absolute superstar on the field and this book really gets into his mindset of how he went about his life both on and off the field. Don't expect sordid revelation's or stories of excess, this is a professional look into an introverts mind and how he become one of the best
Read more
Helpful
Report abuse

Ray
1.0 out of 5 stars Disappointing
Reviewed in Australia on 11 October 2016
Verified Purchase
As much I have always admired Chris Judd as an outstanding player I found his book extremely disappointing and did not finish it. I liken the book to a monolgue, there was just no aliveness in the book. Sports books that have I have enjoyed are those where there is interaction and honest feedback from players, coaches, mentors and commentators throughout the book and the athletes career. .
Read more
Helpful
Report abuse

Kathy S
4.0 out of 5 stars Inside football
Reviewed in Australia on 1 January 2017
Verified Purchase
A very interesting read, with some great (and honest) insight into the world of football. Judd has the ability of honest introspection and though essentially a private person, shares some personal moments of his football journey. Presents the "human" side of the "football animal". A good read for any football fan.
Read more
Helpful
Report abuse

Peter Scully
3.0 out of 5 stars Could have been a hero
Reviewed in Australia on 25 October 2018
Verified Purchase
Should have joined Collingwood!!
Read more
Helpful
Report abuse

Garry Buswell
4.0 out of 5 stars As I see it
Reviewed in the United States on 3 January 2017
Verified Purchase
To the point
Read more
Report abuse
See all reviews