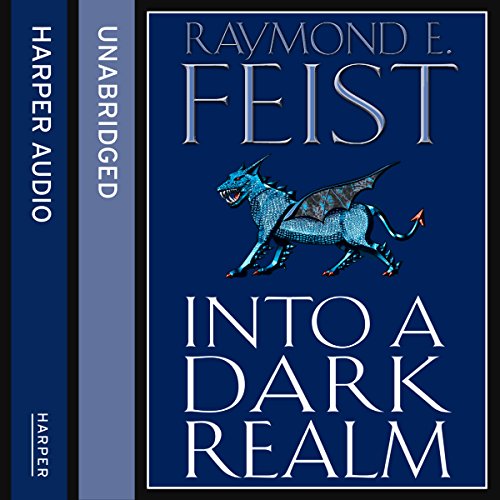 Into a Dark Realm: Darkwar, Book 2

The second book in the Darkwar series, from worldwide best-selling author of Magician, Raymond E. Feist.

Chaos threatens to overwhelm two worlds as the most dangerous force ever encountered threatens to invade Midkemia, while the most treacherous magician in history, the madman Leso Varen, begins to wreak havoc on the world of Kelewan.

Pug and the Conclave of Shadows are determined to find Varen, only to discover that he has usurped the body of one of the most powerful men in the Empire of Tsuranuani, a Black Robe and member of the Assembly of Magicians. Pug has the almost impossible task of uncovering the true identity of the fiendish magician in an entire city full of Black Robes.

Murder, mayhem, horror, and the darkest evil await Pug's son, Magnus, and his companions as they attempt to discover the ultimate source of the terrible threat that hovers over Midkemia and Kelewan. Leading a desperate expedition into the realm of the Dasati, the vast and malevolent empire which is threatening his homeworld, Magnus hopes to find the key to defeating this enemy who is capable of overwhelming the combined might of two worlds.

But even if he does, the companions will have a desperate struggle to return home with their vital information. Three worlds will teeter on the brink of destruction as the third Riftwar, the Darkwar, is unleashed.

Switch between reading the Kindle book & listening to the Audible narration with Whispersync for Voice.
Get the Audible audiobook for the reduced price of $12.49 after you buy the Kindle book.
Final days - Don't miss out!
Learn more about membership
By completing your purchase, you agree to Audible’s Conditions Of Use and Privacy Notice.
Sold and delivered by Audible, an Amazon company

4.7 out of 5 stars
4.7 out of 5
333 global ratings
How are ratings calculated?
To calculate the overall star rating and percentage breakdown by star, we don’t use a simple average. Instead, our system considers things like how recent a review is and if the reviewer bought the item on Amazon. It also analyses reviews to verify trustworthiness.

J. R. Rees
4.0 out of 5 stars The Master has returned
Reviewed in the United Kingdom on 10 June 2007
Verified Purchase
Kaspar smiled 'Life has a habit of making changes without consulting you .... We make plans, but fate doesn't always listen to what we want'

These words alone are worth reading 295 pages for but it must also be pointed out that 'Into a Dark Realm' is a very good book, far befitting a Master than Apprentice.

I have read many reviews of REF's post Riftwar work with numerous complaints of how his future novels have lacked the spark of that series. This criticism is harsh as any future work from what many consider to be the definative fantasy works will always seem to wither in comparrison. It must also be mentioned that frequently an authors first novel may be some 10 or 20 years in the planning but after that they are expected to dish out future publications on a seemingly annual basis.

I personally consider the Empire Trilogy to be REF's finest work ( with co-author Janny Wurts ) but die hard fans should be rest assured that his latest novel has all the hallmarks of one of the greatest writers of the genre.

Most of the usual suspects put in an appearance including a suprise appearance right at the end. Pug features more front and centre than in previous episodes which from this readers perspective is no bad thing as it is taking an eon for the prophecy of Lims-Kragma to unfold.

The story takes place on Midkemia, Kelewan and the world of the Talnoy, which I suspect will feature heavily in the concluding parts of this series.

As with all his work, it is essential to start from at least the start of the series before reading this book but for all newcomers you will get the most benefit from starting at the very beginning. 'Magician' is still the finest single book I have read and the only one which I have read more than twice.

I will forever be gratful for the work Raymond E Feist & look on with anticipation of the next chapter in this story which started all the way back on a beach near Crydee.
Read more
12 people found this helpful
Report abuse

BlackBrigand
4.0 out of 5 stars Still one of the best fantasy series ever.
Reviewed in the United Kingdom on 23 February 2016
Verified Purchase
Raymond E Feist is one of the handful of fantasy authors that I have collected and kept on my shelves over the years and re-read chronologically from time to time.

Into A Dark Realm is the second of the Dark War Trilogy and as always is a good read although one does get the feeling that much of this particular volume is scene setting for the next part of the story.

Still one of the best fantasy series ever.
Read more
One person found this helpful
Report abuse

Amazon Customer
5.0 out of 5 stars Good lead up for the next adventure
Reviewed in the United Kingdom on 18 April 2022
Verified Purchase
It's a great lead into the next adventure opening up the wider world/world's.
Read more
Report abuse

terry butterfill
5.0 out of 5 stars Fantastic read
Reviewed in the United Kingdom on 26 February 2019
Verified Purchase
This is the second trilogy in a series , one of the. Can’t put it down sort. What else can be said
Read more
Report abuse

Null
2.0 out of 5 stars Sloppy
Reviewed in the United Kingdom on 9 July 2013
Verified Purchase
As much as I like Feist, its always annoyed me that the proof reading for his books is almost non-existent. Full of proofing mistakes and errors, you kind of get used to them, until you get to this book.

Amongst all the usual mistakes, a rather massive string of mistakes appears. The word "die" which, as you can imagine turns up quite a lot, has almost universally been replaced by the word "the" instead. "He was scared to the."

I have no idea if these massive cockups appear in the other versions, but the Kindle editions of all of his books are riddled with them. One of his books has a massive error on the first sentence ffs.
Read more
Report abuse
See all reviews