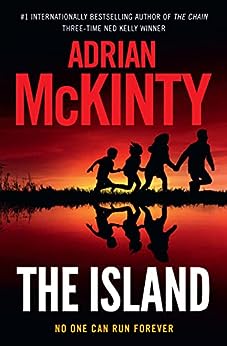 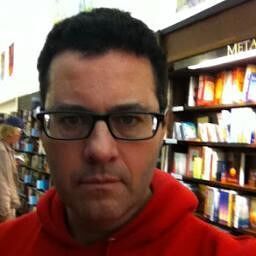 by Adrian McKinty (Author) Format: Kindle Edition
See all formats and editions
Sorry, there was a problem loading this page. Try again.

Propulsive, terrifying, and blade-sharp, The Island is the next thrilling adventure from the mastermind behind the award-winning global sensation The Chain, and a family story unlike any you've read yet.

You should not have come to the island.

You should not have been speeding.

You should not have tried to hide the body.

You should not have told your children that you could keep them safe.

'a tense, pacy page-turner' The Guardian

'The tension is palpable. The plot is twisted and claustrophobic. McKinty snatches you early and doesn't let you escape until the very last page' Good Reading

"Deliverance meets The Road Warrior in this harrowing survival thriller . . . McKinty is a master of suspense."--Publishers Weekly (starred review)

"Expertly choreographed and breathlessly exciting . . . both the peril and the family are like no other. The Chain was McKinty's breakthrough novel and this one could be every bit as big."--Booklist (starred review)

"Heart-stoppingly tense and unpredictable, The Island twists a family vacation to a nightmarish breaking point. Adrian McKinty has written another irresistible and pulse-pounding thriller about the surprising places evil hides and just how far we'll go for those we love."
--Karin Slaughter, New York Times bestselling author of Pieces of Her

"Wow, this book left me breathless and on the edge of my seat from the very first page--this is thriller writing of a high order. Gripping and unpredictable, prepare to be hooked and pumped full of adrenaline as McKinty deftly weaves a compulsively readable plot with characters that you are rooting for. No one does high- stakes tension like McKinty. Put The Island at the top of your TBR--you won't regret it."
--Sarah Pearse, New York Times bestselling author of The Sanatorium

Praise for the instant New York Times bestseller The Chain

"McKinty hangs on to his wit and literacy even under duress...Beneath its surface of high-speed thrills, The Chain is clearly the work of the philosophical thinker McKinty has always been."--Janet Maslin, New York Times

"The pace quickens and the tension builds whenever the mother and daughter appear in a scene. In the end, what makes The Chain so frightening - and why it works so well as a thriller - is that all of Rachel's actions remain completely relatable, even as she whipsaws between terror and determination, morphing from victim to perpetrator."--Tina Jordan, The New York Times

A chilling, diabolical page-turner you'll want to savor.--People Magazine, Book of the Week

This is more than nail-biting; think cuticle-shredding.--Bethanne Patrick, The Washington Post

This nightmarish story is incredibly propulsive and original. You won't shake it for a long time.--Stephen King

You have never read anything quite like The Chain and you will never be able to forget it. Brilliant. Beautifully written. A masterpiece of tension. The Chain scared the hell out of me but I could not put it down! I raced to the end of the book and then went back to see how Adrian McKinty pulled it all off. The Chain belongs in the elite company of world-class thrillers like Gone Girl and The Silence of the Lambs. This is nothing short of JAWS for parents.--Don Winslow, New York Times bestselling author of The Cartel and The Force --This text refers to the audioCD edition.

Adrian McKinty was born and grew up in Belfast, Northern Ireland. He studied philosophy at Oxford University before moving to Australia and to New York. He is the author of more than a dozen crime novels, including the Dagger and Edgar-award nominated debut Dead I Well May Be, the critically acclaimed Sean Duffy series, and the award-winning standalone thriller The Chain, which was a New York Times and #1 international bestseller. McKinty's books have been translated into over 30 languages and he has won the Edgar Award, the International Thriller Writers Award, the Ned Kelly Award (3 times), the Anthony Award, the Barry Award, the Macavity Award, and the Theakston Old Peculier Crime Novel of the Year Award. --This text refers to the audioCD edition.

The unmissable new thriller from the bestselling, award-winning author of THE CHAIN. --This text refers to an alternate kindle_edition edition.

Adrian McKinty was born and grew up in Belfast, Northern Ireland during the Troubles of the 1970s and 1980s. His father was a boilermaker and ship's engineer and his mother a secretary. Adrian went to Oxford University on a full scholarship to study philosophy before emigrating to the United States to become a high school English teacher. His debut crime novel Dead I Well May Be was shortlisted for the 2004 Dagger Award and was optioned by Universal Pictures. His books have won the Edgar Award, the Ned Kelly Award, the Anthony Award, the Barry Award and have been translated into over 20 languages. Adrian is a reviewer and critic for The Sydney Morning Herald, The Irish Times and The Guardian. He lives in New York City with his wife and two children. --This text refers to an alternate kindle_edition edition.
Read more

Adrian McKinty was born and grew up in Belfast, Northern Ireland. He studied politics and philosophy

at Oxford University before moving to New York in the mid 1990s. His first novel Dead I Well May Be

(loosely based on his experiences as an illegal immigrant in the US) was published in 2003. In 2012 after

series. In 2019 after giving up writing Adrian had a global hit with his standalone novel The Chain. Adrian's

Award and the Theakston Old Peculier Crime Novel of the Year Award. His books have been translated into over

4.2 out of 5 stars
4.2 out of 5
1,246 global ratings
How are ratings calculated?
To calculate the overall star rating and percentage breakdown by star, we don’t use a simple average. Instead, our system considers things like how recent a review is and if the reviewer bought the item on Amazon. It also analyses reviews to verify trustworthiness.

Kindle Customer
2.0 out of 5 stars Lots of action but an unbelievable story
Reviewed in Australia on 26 May 2022
Verified Purchase
Moves along at a cracking pace, but not patch on Sean Duffy novels. Plot strains credibility beyond the breaking point.
Read more
One person found this helpful
Helpful
Report abuse

A holiday for this Seattle family turns deadly when they visit Dutch Island, off the coast of Victoria. Desperate to see some native wildlife, father Tom pays their way over to the private island, normally closed to tourists. An accident spells danger and starts the wild ride. The locals want revenge and Heather, Tom, Olivia, and Owen must fight for their lives.

You will have to remember to breathe whilst reading this one. It is intense and violent. The island is harsh and brutal, the summer heat not helping things. I will give a content warning, there is some animal violence that made me rather upset and ill whist reading it. The story is slightly over the top, but if you have read and enjoyed The Chain you will enjoy it.
Read more
Helpful
Report abuse

* I loved how strong , brave and courageous Heather was.

* How action packed this book was. It has been a long time since a book has had my heart pumping that way.

* I loved the settting in Australia. It was all familiar and the references to the animals too.

* I loved the pace and suspense factor. Whats going to happen at the end of every chapter.

* I really enjoyed the plot. I havent read alot of books with the holiday gone wrong plot. Not too many books out there with this plot.

* Cruelty to animals. I didnt think it was needed. In saying that it only happens in a couple of sentences of the entire book.

* How Heathers stepchildren showed no respect to Heather.

* I did predict what was going to happen but this had no way affected my view on the book.

The Cookster
2.0 out of 5 stars At times sublime ... at other times just ridiculous.
Reviewed in the United Kingdom on 16 May 2022
Verified Purchase
Rating: 2.0/5

I find it a frustrating experience reading Adrian McKinty's work. Each time I read one of his novels I feel like I am reading something that has been written by two completely different authors. The premise for his novels is invariably appealing and his thriller writing is, at times, sublime ... but then there are sections that go to the opposite extreme and are nothing short of ridiculous.

"The Island" is no exception. It has a great premise, with a distinct "Deliverance" vibe about it. There are occasions when the flimic style is wonderfully tense and pacy - sometimes simultaneously - but then Adrian McKinty MkII takes control of the pen and, inexplicably, everything changes for the worse: The writing becomes far more simplistic or even silly; It lacks integrity and is devoid of tension and suspense; The dialogue and descriptive language is often clichéd and the plot developments are rushed and lack credibility; Additionally, the characterisation becomes superficial and the whole narrative develops into something more flimsy and formulaic.

One of these days, Adrian McKinty is going to produce a novel that only features his sublime fictional writing side - and it is going to be a stunning must-read of a novel ... but "The Island" isn't it.
Read more
10 people found this helpful
Report abuse

Janice Staines
4.0 out of 5 stars it’s not THE CHAIN, but it’s still pretty harrowing.
Reviewed in the United Kingdom on 25 May 2022
Verified Purchase
A young family looking for an adventure in the Australian outback. They pay to see local wildlife on a small island just off the mainland. A momentary loss of focus and their car hits and kills a local woman on a bicycle. Only then does their nightmare begin.

This novel is full of horror and suspense as the family try, against the odds, to survive. Some will make it, others don’t.

You’ll be on the edge of your seat as you progress through this book… and, believe me, you’ll think at least twice about taking your gap year in the wilds of Australia - if you know what’s good for you!
Read more
2 people found this helpful
Report abuse

Keith
5.0 out of 5 stars He's done it again
Reviewed in the United Kingdom on 22 June 2022
Verified Purchase
Another exciting thriller, following his amazing global success The Chain
A trip to see the wildlife becomes a nightmare and a fight for survival.
Will appeal to fans of Deliverance.
Adrian writes with style and twists enough.
Read more
Report abuse

grace carley
5.0 out of 5 stars An intense and emotional read - and a rollercoaster ride!
Reviewed in the United Kingdom on 29 May 2022
Verified Purchase
A big fan of McKinty already, this is just superb. Proplsive, profound, poetic and unpredictable. His female lead is believable as well as vulnerable. The detail of the environs and the historic background are another great layer of texture. He is a truly great writer and a great entertainer.
Read more
One person found this helpful
Report abuse

LAF1970
5.0 out of 5 stars Wow
Reviewed in the United Kingdom on 21 June 2022
Verified Purchase
Intense intrigue exciting wow what a wonderful journey I even felt I was in the Australian outback with them. Absolutely a must read
Read more
Report abuse
See all reviews
Report an issue
Does this item contain inappropriate content?
Report
Do you believe that this item violates a copyright?
Report
Does this item contain quality or formatting issues?
Report