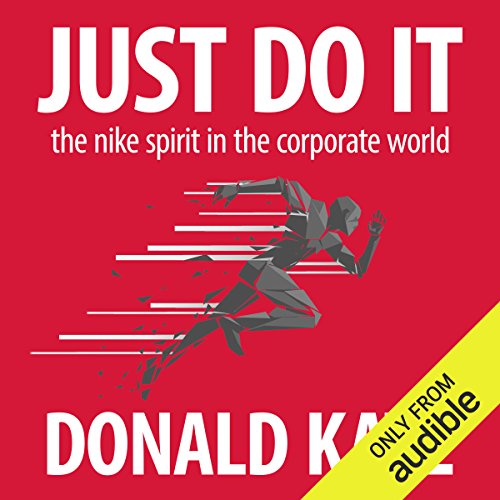 Just Do It: The Nike Spirit in the Corporate World

The protagonist of Just Do It is Phil Knight, a reclusive billionaire who started a two-man operation importing Japanese running shoes and built it into a $4 billion company. Irreverent, unpredictable, and leery of the sports establishment, Knight created the most muscular jock culture in business, a place where employees routinely took two hours at lunch to work out and then strategized late into the night in their holy war against competitors Reebok and Adidas. To outsiders, Nike was a cult. Insiders believed they were furthering the company's mission: to improve the performance of serious athletes.

Not everyone could be a Nike guy. It required a certain attitude. For example: Michael Jordan refusing to wear Reebok at the 1992 Olympics, or Charles Barkley joking about becoming a porn star. In Just Do It, award-winning author Donald Katz shows how Nike created the spectacular imagery and marketing campaigns that made Jordan, Barkley, and Bo Jackson international icons. He also documented Nike's increasingly influential role in the management of its high-priced talent, taking us inside lucrative endorsement deals involving Jim Courier, Andre Agassi, Deion Sanders, Alonzo Mourning, and Pete Sampras as well as behind-closed-doors negotiations with the NBA and the NCAA as it considered a controversial plan for a collegiate Super Bowl brokered by Nike and super-agent Michael Ovitz.

Nike understood the power of imagery and knew how to market those images all over the world. A truly global corporation, Nike relied on capital from Japan to manufacture shoes in Asia sold to one out of every four athletic-shoe buyers in Europe. Katz follows Nike all over the world, taking us from a 19-year-old Korean gluing shoes in a factory, to an advertising wunderkind in Oregon creating the legendary "Bo Knows" campaign, to the fanatical Nike kids who rush into stores the day new shoes hit the street. Along the way, Katz describes the creation and design of Nike shoes, revealing technology worthy of a James Bond movie. He examines the charges leveled against Nike: that the company is exploiting Asian peasants, corrupting younger athletes, and recklessly stirring consumer fever in urban America. He also discusses the corporate spirit and strategies that have made Nike one of the great business stories of the late 20th century.

Just Do It is about the business of sports and the sport of business. It is also the story of a culture in which the sight of an athlete in flight can still evoke awe.

Switch between reading the Kindle book & listening to the Audible narration with Whispersync for Voice.
Get the Audible audiobook for the reduced price of $0.00 after you buy the Kindle book.
By completing your purchase, you agree to Audible’s Conditions Of Use and Privacy Notice.
Sold and delivered by Audible, an Amazon company

4.6 out of 5 stars
4.6 out of 5
22 global ratings
How are ratings calculated?
To calculate the overall star rating and percentage breakdown by star, we don’t use a simple average. Instead, our system considers things like how recent a review is and if the reviewer bought the item on Amazon. It also analyses reviews to verify trustworthiness.

I. Mercado
4.0 out of 5 stars good book for corporate culture understanding in the industry
Reviewed in the United States on 28 July 2011
Verified Purchase
Let me start this review being a little critic; it is a great book if you're open to understand how this industry works...but to be honest here we're missing the critic and internal discussion parts. It is the story of an entrepeneur and how he built his dream.
Read more
One person found this helpful
Report abuse

Benjamin
3.0 out of 5 stars A view of Nike's history from the corporate side
Reviewed in the United States on 30 December 2014
Verified Purchase
Used in conjunction with Strasser and Becklund's much more meticulous and detailed 'Swoosh' and such volumes as Geoff Hollister's 'Out of Nowhere', this is useful for a sense of balance and perspective. On its own, it falls short of the kind of detail one expects from a corporate history.
Read more
2 people found this helpful
Report abuse