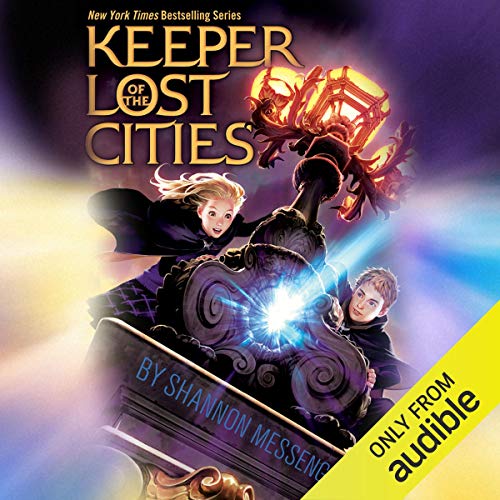 Keeper of the Lost Cities

In this riveting debut, a telepathic girl must figure out why she is the key to her brand-new world - before the wrong person finds the answer first.

Twelve-year-old Sophie has never quite fit into her life. She’s skipped multiple grades and doesn’t really connect with the older kids at school, but she’s not comfortable with her family, either. The reason? Sophie’s a Telepath, someone who can read minds. No one knows her secret - at least, that’s what she thinks....

But the day Sophie meets Fitz, a mysterious (and adorable) boy, she learns she’s not alone. He’s a Telepath too, and it turns out the reason she has never felt at home is that, well...she isn’t. Fitz opens Sophie’s eyes to a shocking truth, and she is forced to leave behind her family for a new life in a place that is vastly different from what she has ever known.

But Sophie still has secrets, and they’re buried deep in her memory for good reason: The answers are dangerous and in high demand. What is her true identity, and why was she hidden among humans? The truth could mean life or death - and time is running out.

4.7 out of 5 stars
4.7 out of 5
2,440 global ratings
How are ratings calculated?
To calculate the overall star rating and percentage breakdown by star, we don’t use a simple average. Instead, our system considers things like how recent a review is and if the reviewer bought the item on Amazon. It also analyses reviews to verify trustworthiness.

Amelia
5.0 out of 5 stars My mind is blown.
Reviewed in Australia on 11 October 2018
Verified Purchase
This book has left me speechless, I simply adored everything in it.
from her adorable pet - sorry no spoilers- and awsume animals. to prattle's pins. NOTE: if those are really somthing i can collect, I'm in!
this series is what I'v been serching for since I fell in love with reading and became a bookworm.
This is a series in the highest place of honour in my favorites book shelf.
sorry but I can not write any more about how much you NEED to read this series, i have to go buy book two for my e-book. + the rest of the series. and all the other books by Shannon Messanger.
Amelia.
Read more
2 people found this helpful
Helpful
Report abuse

Karen Collum
5.0 out of 5 stars Keeper of the Lost Cities
Reviewed in Australia on 9 May 2021
Verified Purchase
This is the best book ever!!! It it so intense throughout the whole book! Shannon Messenger, you are now my second favourite author! My favourite author is Karen Collum aka my Mum, author of Samuels Kisses/Blow me a Kiss, Fish Don't Need Snorkels, Small and Big and When I Look at You. But I didn't send a reveiw to talk about my Mum, so thank you so much for putting your time and effort into writing this book! I love you!!!
Yours sincerely,
Hannah
Read more
Helpful
Report abuse

Peter
5.0 out of 5 stars Remembering Life's Journey
Reviewed in Australia on 28 December 2021
Verified Purchase
This story took me back 50 years to be thankful for my journey, with all the confusion, and love. A great book for any age.
Read more
Helpful
Report abuse

Kerrie
5.0 out of 5 stars Great for kids
Reviewed in Australia on 18 June 2021
Verified Purchase
My 9 year old loved this book and is now reading the rest of the series. She can’t put them talks and talks non stop about the characters
Read more
Helpful
Report abuse

Alex d.
1.0 out of 5 stars 0 stars
Reviewed in Australia on 23 January 2021
How does this book have.a five star rating?! Its
1. A massive rip-off of Harry Potter
2.INCREDIBLY cliched
3. Very heteronormative
Lets start with our main character, a #specialsnowflake named Sophie! A super-genius, photographic memory, very skinny, blonde, white girl who doesnt fit in :(((( WhAT a tradgedy.
And guess what? She has MagICAl PoWeRs. *coughcoughHaryPottercough* Also, she's an elf. But OH NO! She doesnt fit in with ELVES either? Could it be that her EYES ARE THE WRONG COLOUR??!!?!! OH NO!!!!!
Yeah.
Sophie goes on to figure out that not only does she have multiple powers; but theyre SUPER STRONG AND DID I MENTION SHES SUPER TALENTED AT... E V E R Y T H I N G?
The plot is everywhere and you literlly dont give a crap about it until the end, and even then its somewhat sketchy and you just want to finish the friggin book already arghh.
Next we have Sophies cruuuuuushes.
Sophie: *sees white male that is slightly attractive to heterosexual females*
White Male: *says max. three words to S*
Sophie *twilight levels of pining*
Not to mention EVERYONE has a crush on Sophie. And obviously someone's out to get sophie.

AND she doesnt listen to any authorities and gets away with literally anything. So yeah, would definitely not reccomend this crap of a book..
Read more
One person found this helpful
Helpful
Report abuse

Eleanor
5.0 out of 5 stars i loved this book to bit's.
Reviewed in Australia on 18 February 2019
KEEPER OF THE LOST CITIES book one
by Shannon Messenger
i have never read any thing like this out of this world book before, and may i just say, i loved it to bits.
i mean what a great book, if you haven't read it, i say READ IT and believe me when i say you'll find it above any expectations and beyond.
five big shining stars to the Keeper of the Lost Cities.
were adventures await
by Eleanor M. Eckert
Read more
Helpful
Report abuse
See all reviews

Anie
5.0 out of 5 stars real page turner
Reviewed in the United Kingdom on 28 October 2020
Verified Purchase
From the moment she stood up in class and corrected her teacher I knew that sophie had the most complicated background (She was a 12yr old in one of the highest years high school). the book has so much ation, so much emotion and so much suspense that no matter how many times someone asks you to stop reading you cant help flip to the next page then the next then the next.
most of the characters Messenger puts in the book are totally realistic. Keefe in particular was my favorite character (along with sophie and biana) he would sometimes make you want to smack him so hard you'd leave a mark and sometimes his sarcastic comments would make you
throw your head back and laugh.

i recomend it to anyone that is reading this review.
Read more
One person found this helpful
Report abuse

The story of Sophie Foster discovering who she is and getting into crazy hijinks throughout the school year as friendships form and her life is inevitably put in danger. A classic story with added interest and fun thrown in, making it a truly wonderful book to read.

The world building is incredible and the idea of a series of hidden cities intrigues me immensely and I cannot wait to see how Shannon Messenger continues this lovely, whimsical series because I for one need to know what happens to Sophie and Dex and all the other students at Foxfire!
Read more
Report abuse

C. J.
4.0 out of 5 stars So close to 5* except....
Reviewed in the United Kingdom on 17 June 2015
Verified Purchase
There might be a rant somewhere in this review, you have been warned.
Ok, I'm not really the target audience but, I really like this book, I don't give out four star ratings if I'm not going to carry on with the series. The world building worked for me, it wasn't overly descriptive. I enjoyed the many varied personalities you get to see in this book. Some characters happily reminded me from other books I've read, Fitz - Edward Cullen, Dex - Ron Weasley, Keefe - Adrian Ivashkov. It did remind me a little of Harry Potter but not so much that I enjoyed it any less, there are always going to be similarities because Harry Potter came first, but Keeper Of the Lost Cities is definetly original and stands out on its own two feet.
Now for the reason of the one less star, the instant crush! When I opened this book I wasn't expecting any love, I know it's not love, but there were so many heart flutterings! I'm so worried because I can predict who Sophie is going to end up with, I hope I'm wrong! Or just keep'er single (sorry couldn't resist) Just wish it hadn't happened so fast (compared to Harry Potter where there are no crushes for the first couple of books) this is only the first book and the second and third are already out, I've started this series late and there are probably so many relationship developments in the following books that I have to wait for till I get my hands on them!
Overall, a fun story, with a cute cover.
Read more
5 people found this helpful
Report abuse

DatAvidReader
5.0 out of 5 stars Incredible start to an incredible series
Reviewed in the United Kingdom on 15 March 2019
Verified Purchase
This is book one of (at the time of writing this) 9 book series, and without it I would never have gotten into the wonderful world of Keeper of the Lost Cities. When I was 9, my mother bought me this book and I instantly fell in love, with the grounded start before evolving into a mystical world of incredible things. The book picks up pace with the mystery of Prentice, and upon rereading the moments between characters are heartwarming. I love every single part of it, and when it gets to the climax I'm fully invested in the series.

The rest of the books continue at this high standard, and this is perfect for anyone who likes Harry Potter, Percy Jackson or Artemis Fowl.
Read more
2 people found this helpful
Report abuse

LeftieNix
5.0 out of 5 stars Brilliant
Reviewed in the United Kingdom on 13 June 2020
Verified Purchase
My daughter devoured this book. It's quite a hefty book & she read it in a fortnight & demanded the next one. She says it was interesting, exciting, great story & the characters were believable. It's one of her favourite books
Read more
One person found this helpful
Report abuse
See all reviews