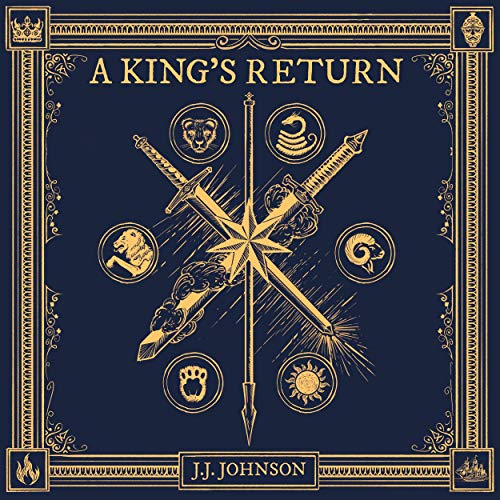 Islandia had been without a High King for a generation. Eloy, the last High King, embarked upon a journey shrouded in mystery after a cryptic warning found from a long lost prophet promised a return of ancient dark forces.

Eloy had placed the rule of Islandia and the five kingdoms in the hands of his closest friend, King Richard. After 30 years most have long since stopped looking for Eloy's return or the darkness foretold. Many under Richard's rule have grown discontent and jealous of his appointment. All hope for peace is lost and chaos reigns after the icy hand of an assassin takes the life of King Richard and plucks him from the throne.

What now? Will Prince Titus, Richard's son, have the strength to hold Islandia together, or will it descend into war over the High King's throne! The kingdom is divided by the sword as each must decide where their loyalties lie.

Last chance - Ends Thursday!
Learn more about membership
By completing your purchase, you agree to Audible’s Conditions Of Use and Privacy Notice.
Sold and delivered by Audible, an Amazon company

4.8 out of 5 stars
4.8 out of 5
21 global ratings
How are ratings calculated?
To calculate the overall star rating and percentage breakdown by star, we don’t use a simple average. Instead, our system considers things like how recent a review is and if the reviewer bought the item on Amazon. It also analyses reviews to verify trustworthiness.

Val
5.0 out of 5 stars When’s the sequel come out?
Reviewed in the United States on 11 December 2020
Verified Purchase
Definitely a captivating read that intensely draws the reader in wanting more. Very descriptive writing putting you in the place of any of the main characters as they fight for Islandia and await the return of the High King! Can’t wait for the 2nd installment of this trilogy!
Read more
One person found this helpful
Report abuse

Katie Reed
5.0 out of 5 stars Well written with great plot twists
Reviewed in the United States on 26 September 2020
Verified Purchase
Such a well written story! I loved the idea of the different viewpoints of various characters and how they all came together in the end. The plot twists and even loss of unexpected characters kept me on the edge of my seat. I enjoyed this first installment and I am looking forward to the next one!
Read more
Report abuse

Joe Bedwell
5.0 out of 5 stars anticipating the rest of the trilogy!
Reviewed in the United States on 7 December 2020
Verified Purchase
This book blew me away on so many levels, from the characters to the different kingdoms rich detail. I can't wait to get my hands on the rest of the story! If you are a fan of other popular stories in this genre then you will absolutely love this book!
Read more
One person found this helpful
Report abuse

Matt and Andrea Marlin
5.0 out of 5 stars Fast-paced and engaging story
Reviewed in the United States on 20 February 2021
Verified Purchase
Fast-paced and engaging story. Once you start, it’s hard to put down. The plot is developed along various lines, allowing you to experience the narrative from many different angles. Fans of Tolkien, Lewis, ND Wilson, and Andrew Peterson will love this book.
Read more
Report abuse

Reed
4.0 out of 5 stars Plot twist at the end
Reviewed in the United States on 3 October 2020
Verified Purchase
This book did not disappoint. It was easy to fall in love with the characters as the plot unfolded. Geralt was my favorite character of all. The world of this story was very creative and diverse. I was totally surprised by the twist of events at the end of the book. As the first installment I am glad the story won’t end here.
Read more
Report abuse
See all reviews