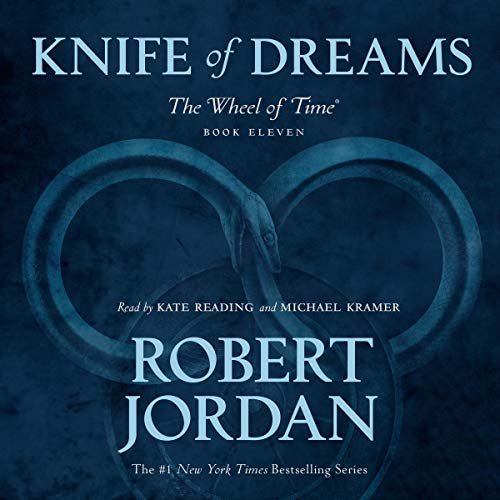 Knife of Dreams: Book Eleven of The Wheel of Time

Since its debut in 1990, The Wheel of Time by Robert Jordan has captivated millions of readers and listeners around the globe with its scope, originality, and compelling characters.

The Wheel of Time turns and Ages come and go, leaving memories that become legend. Legend fades to myth, and even myth is long forgotten when the Age that gave it birth returns again. In the Third Age, an Age of Prophecy, the World and Time themselves hang in the balance. What was, what will be, and what is, may yet fall under the Shadow.

The seals of Shayol Ghul are weak now, and the Dark One reaches out. The Shadow is rising to cover humankind.

In Tar Valon, Min sees portents of hideous doom. Will the White Tower itself be broken?

In Cantorin, among the Sea Folk, High Lady Suroth plans the return of the Seanchan armies to the mainland.

In the Stone of Tear, the Lord Dragon considers his next move. It will be something no one expects, not the Black Ajah, not Tairen nobles, not Aes Sedai, not Egwene or Elayne or Nynaeve.

Against the Shadow rising stands the Dragon Reborn...

The Wheel of Time
New Spring: The Novel
#1 The Eye of the World
#2 The Great Hunt
#3 The Dragon Reborn
#4 The Shadow Rising
#5 The Fires of Heaven
#6 Lord of Chaos
#7 A Crown of Swords
#8 The Path of Daggers
#9 Winter's Heart
#10 Crossroads of Twilight
#11 Knife of Dreams

By Robert Jordan
Warrior of the Altaii

By Robert Jordan and Amy Romanczuk
Patterns of the Wheel: Coloring Art Based on Robert Jordan's The Wheel of Time

4.7 out of 5 stars
4.7 out of 5
5,194 global ratings
How are ratings calculated?
To calculate the overall star rating and percentage breakdown by star, we don’t use a simple average. Instead, our system considers things like how recent a review is and if the reviewer bought the item on Amazon. It also analyses reviews to verify trustworthiness.

Luke MacRae
4.0 out of 5 stars Finally, some more action
Reviewed in Australia on 20 April 2021
Verified Purchase
The last book was a little slow, and this started in the same manner, but we're back in the action.
Read more
Helpful
Report abuse

Kindle Customer
5.0 out of 5 stars Fond Memories of Childhood Adventures
Reviewed in Australia on 26 January 2020
Verified Purchase
I love these books, they were and are a milestone series in my journey of imagination and creativity. Give yourself a treat, and read them all.
Read more
Helpful
Report abuse

Amazon Customer
5.0 out of 5 stars Another great work
Reviewed in Australia on 31 July 2019
Verified Purchase
This is another book in this wonderful series equal to all the rest in the series. Well done and thank you for the read
Read more
Helpful
Report abuse

jbjnghigihgihguyftf
3.0 out of 5 stars Perfect but dirty
Reviewed in Australia on 4 January 2021
Verified Purchase
Had some dirt(can't remove) on pages of book
Read more
Helpful
Report abuse

Justin
5.0 out of 5 stars Riveting!
Reviewed in Australia on 17 April 2015
Wonderfully it's more of the same. Only the tension builds as ever. There is no question if I'll proceed with the series. My condolences to the authors family. Truly, he was an awesome writer! He has awoken from the dream and his words will live with us always. May he forever Rest In Peace.
Read more
Helpful
Report abuse
See all reviews

Farhad Shawkat
5.0 out of 5 stars One of the best in the series - Robert Jordan's farewell
Reviewed in the United Kingdom on 5 April 2021
Verified Purchase
Finally, an end to dreary prologues – this book opens with a bang! Straight into the action, and you sense the end game is near. The signs are more prominent and ominous, and it almost seems as though this might be the penultimate book at times.

Sadly, it is the last one written by Robert Jordan. While I have no doubts regarding Brandon Sanderson’s abilities, I will miss Jordan’s writing style. Luckily, he left behind extensive notes, so we will get to see the true ending that he envisioned for his story.

The last few books have involved sidequests for Perrin and Mat that have dragged on a bit, Perrin’s in particular. Egwene in my opinion has the best chapter in the book, as her story arc ended as a real cliff hanger in Crossroads of Twilight. Elayne also in the thick of things, annoying at times, but active. Very little Nynaeve, though she’s had enough chapters so far in the saga to be my favourite of the three.

As always, decent ending to the book, and leaves you desperate for the next one in the series.
Read more
Report abuse

JRC Salter
4.0 out of 5 stars Finally, the plot gets moving
Reviewed in the United Kingdom on 28 December 2012
Verified Purchase
Right from the first few pages, I got the feeling that this book was something different to the previous few. While it took some time to get there, I was proven correct.

This feels like the beginning of the end and it finally ties off some of the plot threads that started as far back as Crown of Swords. Mat, Perrin and Elayne all have a proper climactic ending and once this book was over, I felt that we could get down to the remainder of the plot instead of dragging out story lines over the course of four or five books.

Unfortunately, for the most part, he doesn't have much to do except court Tuon. Until the end where he commands a decent battle for the first time since Fires of Heaven. It is in this book that Mat and Tuon's relationship hits a long expected moment in an unexpected way and makes you think whether it would have happened at all if Mat had not walked through the Ter'angreal in Tear.

Again, his story is basically tying up the plot of his rescue of Faile. Again, we get an exciting battle where allegiances are shifted in unexpected ways. At one moment I was genuinely surprised by one character's actions and saddened it ended like that. The only benefit I can say of stretching this story across four books is that when Faile and Perrin are finally reunited, you get the same elated feeling that Perrin feels. If maybe for a different reason.

As before, this is another tying up of Elayne's fight for the throne, though most of this is contained within the last couple of chapters, with a couple of interesting side plots that have a small amount of bearing on the outcome.

For the first time in this series, I can safely say Egwene's story is one of the most interesting and well written portions of the book. In perhaps the only plot point of Crossroads of Twilight, she was taken by Aes Sedai of the White Tower, and in this she tries to use it to her advantage. Reading about her sowing seeds of dissent and refusing to back down just because of a few punishments makes me feel how far the character has come. It is in her story that one of my favourite scenes to date occurs and is simply her walking into the mess hall and sitting down to eat. I'm not going to spoil why this is good though.

And here is the weak point of the novel. Rand has virtually nothing to do. Oh he gets to battle Semirhage, and suffers yet another lasting injury, but he doesn't get much else. It seems that Jordan is just trying to shoe horn him in because he's the main character, and that he can't allow Rand to do anything until the others' stories are finished.

All in all, a fantastic return to form, and here's hoping it gets better from here.
Read more
3 people found this helpful
Report abuse

M. E. S. Downing
4.0 out of 5 stars well its better....
Reviewed in the United Kingdom on 6 November 2005
Verified Purchase
It's been a long wait, and whilst I'm not saying it was totally worth it, KoD does make me happy in a few ways! He has actually closed off a few story lines and things really do seem to be progressing towards the final battle. The question is still though will he live long enough to write it!! Jordan's style is heavy going with paragraphs of who is wearing what, and really pointless conversations, but when he wants to kick a story along he can. Once the drugs for the verbal diarrhoea kick in for him his ingenuity and sometimes plain nastiness for some of the characters [often well deserved!!] just rushes you along and the pages fly by - but so often you end up reading bits begging for the action to start!
Bring on Tarmon Gai'don!!! (please...)
Read more
One person found this helpful
Report abuse

APE
5.0 out of 5 stars The Wheel Of Time Continues
Reviewed in the United Kingdom on 29 July 2013
Verified Purchase
The last book in the series that Robert Jordan completed before his untimely death, this continues the story of a group of ordinary young people from the Two Rivers being thrust into totally unordinary circumstances. If you enjoy fantasy novels, don't start with this one. Start with the first book in the series - The Eye of the World - and read through. The series is much better read in the correct order. If you are really serious about understanding the story, go one better and start with the shorter prequel, New Spring, which precedes the main series by 20 years and gives a good background story to help you root yourself in the novels.
Read more
One person found this helpful
Report abuse

Heather Cook
4.0 out of 5 stars This book has started of better than book ten
Reviewed in the United Kingdom on 24 March 2017
Verified Purchase
You can curtainly tell the female characters are written by a man. This book has started of better than book ten, which you need to read to understand the story.. but be warned book 10 is full of gass and not much else. However, my husband and i have been working our way through all the books, and we do like the characters, just wish the books got to the point more often. It is an intregueing world that they author has established.
Read more
Report abuse
See all reviews