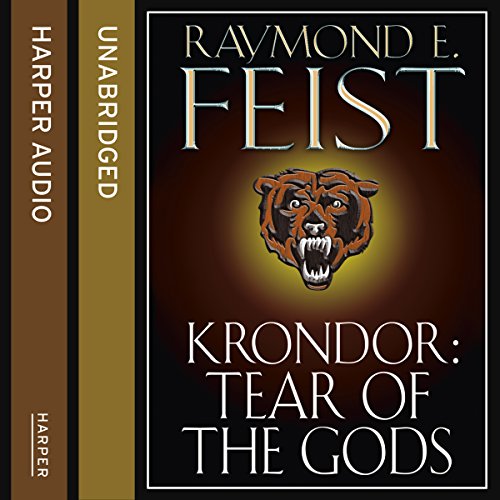 Krondor: Tear of the Gods: The Riftwar Legacy, Book 3

Third in the massively successful Krondor series inspired by Feist's global best-selling computer game Return to Krondor. A drop in the ocean?

A raid upon the high seas signals an attack of unprecedented magnitude by the forces of darkness. For the holiest of holies, the Tear of the Gods has been lost to the Temple of Ishap. After a raid planned by Bear, one of the most brutal pirates to sail the Bitter Sea, goes dramatically wrong, the colossal gems sink below the waves.

So begins a story of the Tear of the Gods, the most powerful artifact known to the Temples of Midkemia. For it allows the temples to speak with their gods. Without it they are lost for a decade, until another gem is formed in the distant mountains.

Squire James, William, and Jazhara, new court magician, must seek out the location of this gem with Brother Solon, a warrior priest of Ishap, and Kendaric, the sole member of the Wreckers' Guild, with the power to raise the ship. They are opposed by the minions of Sidi, servant of the Dark God, who seeks to possess the Tear for his own ends or to destroy it, denying it to the forces of light.

This third tale in The Riftwar Legacy is a breathless race for a priceless treasure. It's a race against time, against the myriad sinister and competing evil forces desperate for the all-powerful prize, and ultimately against the fundamentals of nature, which in Midkemia can be as formidable as the gods themselves.

4.6 out of 5 stars
4.6 out of 5
369 global ratings
How are ratings calculated?
To calculate the overall star rating and percentage breakdown by star, we don’t use a simple average. Instead, our system considers things like how recent a review is and if the reviewer bought the item on Amazon. It also analyses reviews to verify trustworthiness.

A. Cresswell
3.0 out of 5 stars Just lacking .... part of the "Couldn't be bothered trilogy"
Reviewed in the United Kingdom on 12 March 2013
Verified Purchase
I'm reviewing Feists' (and those involved with him) works in Chronological order. Unfortunately for some books there are new books and covers being re-released in March 2013 so reviews for the old books can no longer be posted. Not so clever AMAZON.

Anyway this review is for the chronological reading of books by Feist and others that all link Medkemia and Kelewan and form the Riftwar Saga, Legacy and beyond. This one is for Krondor: Tear of the Gods. This is the third of three books currently available.

and so on ... look for the rest of the reviews in the coming months.

OK so to set some context. Raymond got into bed with Sierra over a video game based on his novels. He then, for whatever reason, decided to try and write novels alongside the game. (All of this can be found on his website) These novels lack all of the in depth flavour and thrills that the Riftwar Saga produced. It's as if they were written by someone else. The characters lack depth and colour and simply seem to behave ina shallow and superficial maner. The plots are boring and in fact you can imagine them being little side quests in a computer game. All in all a lot of damage doen to his reputation. I'm *really* looking forward to re-reading the next few books which are not associated with this awful period of writing. I have heard that JIMMY and THE CRAWLER (The forth book in the series has been started. This is apparently free of the game's/Sierra's influence so I have high hoped for it when it comes out but I'l look at that later. There's rumours of a fifth book. Lets see. Anyway the book was given 3 stars and to be fair 2 of them were simply because this is feist and his previous works keep me coming back but if it had been anyone else he'd have been toast.
Read more
One person found this helpful
Report abuse

happyniki
5.0 out of 5 stars Superb
Reviewed in the United Kingdom on 18 May 2019
Verified Purchase
Another smashing read. Feist’s writing just gets better and better. Love journeying with the characters. So glad I decided to reread the Magician books after all these years as there are now so many more of them to get my teeth into!
Read more
Report abuse

J. Guest
2.0 out of 5 stars Disappointing read, well below his high standards.
Reviewed in the United Kingdom on 11 December 2000
Verified Purchase
Firstly, I began reading Feist before he became popular, therefore, I know what I'm talking about. I wanted this latest book to be a return to Feist's original style, full of invention, great characters, freshness in approach to the genre and adventure. Instead, what we have is a very poor second, a rambling disjointed, unattractive story. It totally lacks excitement and fails to engage the reader. What has happened to Feist, he now produces formula driven books, lacking depth, imagination and charm. I hope the next is better - but somehow doubt this.
Read more
2 people found this helpful
Report abuse

chloe
5.0 out of 5 stars Fantastic Loved Every Page
Reviewed in the United Kingdom on 1 September 2013
Verified Purchase
This is one of Feist's best books so far, could not stop reading until it was read from cover to cover and is probably one of the few books i would read AGAIN! a fantastic read again one of my favourites. a really strong and captivating storyline.

A great book especially if you enjoy extremely well written characters that make you laugh, smile and cry.

Mike Davies
4.0 out of 5 stars A satisfying ending if not a brilliant one.
Reviewed in the United Kingdom on 19 November 2013
Verified Purchase
The krondor series peaked with the assassins but as part of the trilogy, the tear is not overshadowed. Questions are left unanswered and plots develop and conclude nicely. Whilst not as gripping as the nighthawk temple of doom, the search for the liche is one which keeps you going. A decent end to a good trilogy.
Read more
Report abuse
See all reviews